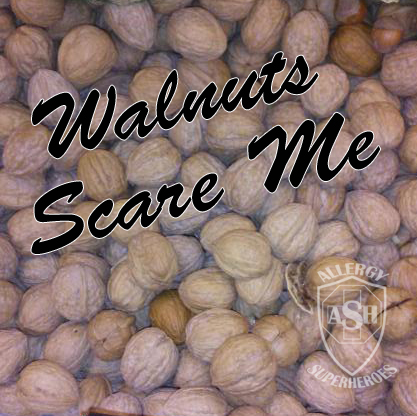 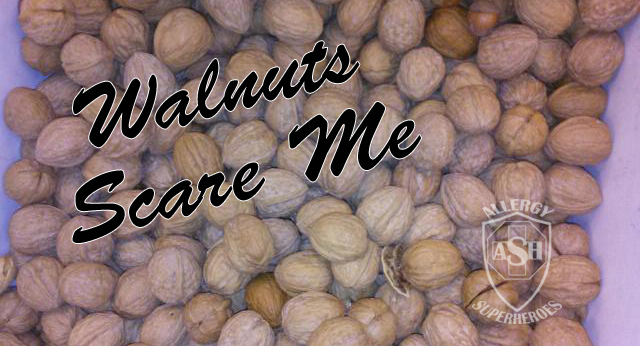 This is a repost from my old blog. The blog was about my writing life and unrelated to food allergies, except that, in March of 2012, I shared my experience with giving Zax walnuts (my very worst allergen) for the first time. It was an emotional adventure, as you’ll see below. 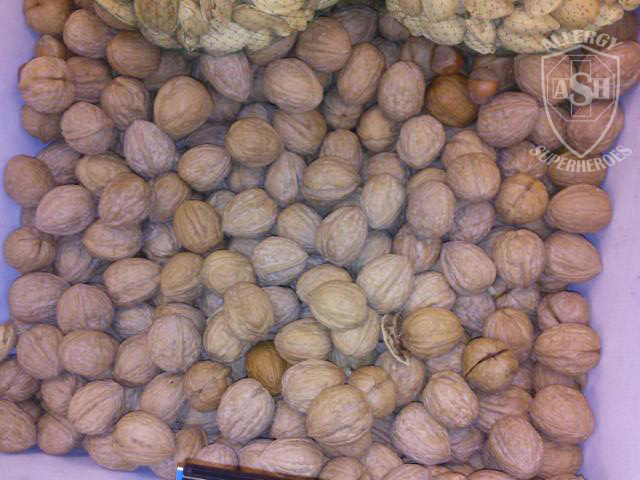 You probably don’t know this about me, but I have severe food allergies. I’m allergic to tree nuts. I don’t think I’ve ever mentioned this before, in large part because it doesn’t take up much mental effort on my part. I’ve been allergic since I was tiny, so label reading, asking questions, and avoiding certain foods/situations are all par for the course. I’ve been bitten on occasion if I assume too much (after all, who puts nuts in egg rolls?), but by and large the situation is under control.

By the same token, I don’t have to expend too much energy on Zax’s food allergies either. The little guy unfortunately inherited my flawed genes, and is allergic to egg (confirmed) and peanut (unconfirmed.) When we went to the allergist after his first taste of scrambled egg, my primary reaction was “Really? He didn’t get the memo that he was supposed to take after his Daddy? *dramatic sigh*” And then I incorporated egg and peanut into my existing food avoidance routine and moved on. It wasn’t the earth-shattering diagnosis it is for newly-initiated allergy parents (like my parents nearly 30 years ago) because I already knew how to live with it. The allergist and pediatrician also advised that we keep tree nuts out of Zax’s diet until he was three or four as a precaution because of my allergies, even through skin tests were negative. Which we’ve done.

Well, Zax is now three. He communicates fairly well. He still doesn’t have the words for a lot of things, but he can say enough to give us the idea of what’s going on, especially when we ask him questions. And even though he’s never going to encounter tree nuts regularly (at least, not in this household,) I’d like to know whether we have anything to fear from accidental exposures. So I’ve decided it’s time to introduce him to tree nuts.

Our first forays were uneventful–and inconclusive. He said he didn’t like the foods we offered him, which consisted of an Almond Joy from his Halloween candy and a piece of Pecan Tart from hubby’s Christmas treats. Nothing happened after these tastes, but I wanted to be certain “I don’t like it” didn’t mean “it makes my mouth feel funny.” So I enlisted my parents and in-laws to make eggless cookies and/or brownies with ground up nuts in them. This way I could be certain he likes the delivery method enough to eat a significant amount of the nuts–thus ensuring me that nothing will happen. My mother arrived the very next week with a bag of chocolate chip cookies…. with WALNUTS.

There’s nothing like facing your fears head-on. When it comes to other nuts, I can recognize them as food. I’m disappointed when I learn that they’re an ingredient in something that looks tasty, but they don’t diminish a food’s integrity. I understand that other people like them. Walnuts, however… well, they’ve got to be the scariest nuts on the face of the earth. Even as an adult, when I learn that something has walnuts in it I wonder, “Why would anyone do something like that? Why would you ruin a food?”

It’s a reaction purely driven by instinct. After all, walnuts are my kryptonite. Every time I’ve had the misfortune to encounter them, they’ve knocked me flat. (And really, who puts walnuts in egg rolls???) So when Mom handed me that bag (carefully double-wrapped so I wouldn’t touch the contamination) my blood pressure raised by a few points.

I pondered the repercussions for the rest of the day, until halfway through dinner I decided that that night would be the night. Walnut cookies for dessert. Then I proceeded to worry through the rest of dinner. Zax was in a funky mood already and didn’t want to eat dinner very fast, which only served to extend my anxiety. By the time he finally finished his dinner, I was wound as tight as a spring. Then, with Epi-Pen tucked close in the pocket of my hoodie (I didn’t want to hover and worry him, after all) I had hubby offer him one of the poisonous cookies.

I quite literally felt like I was holding a gun to my child’s head. I mean, these were walnuts. Something was going to happen. Something was supposed to happen. That’s just the way it is. Nobody who eats cyanide thinks it tastes good.

Well, I’m happy to report that nothing happened. Nothing except that he loved his Ama’s cookies. As the tension began to release, it was replaced by a new concern–concern for myself. Have you ever seen a three-year-old eat a cookie? Or any food, for that matter? M-E-S-S-Y. Crumbs everywhere. Having hubby wash his face and hands afterwards wasn’t going to be enough, the whole table needed a scrubbing. With soap. And his chair. Plus, he made like he was going to touch every wall and surface between the table and the bathroom sink, which hubby had a job preventing. Maybe this wasn’t such a hot idea after all.

It wasn’t until the fourth and final day of walnut cookies that hubby and I figured out that he ought to eat them outside. Let the birds, bugs, and elements wash the allergens away for us. Much easier that way. Safer too.

I learned a lot of things during this experiment, mainly about myself, but also about how we’re going to have to handle food allergies as Zax (and Kal) get a little older. For now, I’m happy to have the walnuts out of the house, and I’m very happy that they aren’t going to kill my first baby.