I’m not quite sure how to feel right now. I’ve just been handed the diagnosis that my eldest son Zax has asthma.

Asthma runs in the family, of course. We already know that Kal has it (or at least has reactive airway disease, he’s still too young for lung function testing.) But I have it too, as does my dad, as did his mom. We’re going on four generations here, so I’m certain that’s what Kal’s tests will prove once he’s old enough. And I always knew that this was a possibility for Zax as well.

Except that Zax doesn’t act like an asthmatic kid. The world is his playground, no matter how much I tell him not to climb on the furniture (whereas Kal has occasional coughing fits and needs a rest after following his brother around.) Zax never slows down except right after waking up in the morning, when I ask him to do chores, or when he’s sick (and sometimes not even then.) He doesn’t have a chronic cough. He doesn’t cough with exercise. And the only times I’ve heard him wheeze were when he aspirated a piece of carrot and when he had the flu.

That’s what led us to the doctor yesterday in the first place–to follow up on his flu hospitalization. I was supposed to have done this back in December, but with Christmas craziness and the fact that Zax seemed and acted completely better, I forgot. So even though it was more than a month later, the doctor wanted him to do a lung function test to see how he was doing. 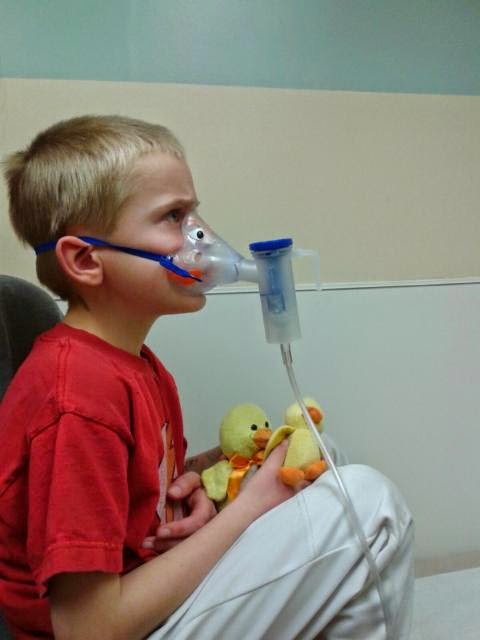 His numbers were below the level they wanted, 81% rather than 85-90%. When she listened to him, she also said he sounded “decreased.” (No, not “deceased.” 😉 So they gave him a neb of albuterol. Then we waited the 15 minutes or so for it to take full effect, and he performed the test again. 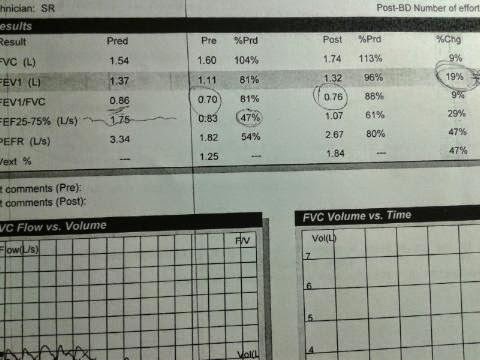 Our doc told me that an increase of 12% or greater means asthma. Zax increased by 19%.

(Asthma math is apparently different than regular math, though, because 96%-81% = 15%, not 19%. I didn’t notice that one until I got home, plus it was very late anyway and I wanted to get out and get dinner. But I’ll have to ask about this at the next visit, because all of the categories don’t add up.)

Going back to the fact that Zax doesn’t act asthmatic, I asked him if he felt any better–or any different–after the neb. He said no, and was ready to be off and running to the next activity. So it increased his lung capacity, but not noticeably so for him.

We’ve never done lung function on Zax before so the doc doesn’t quite know when this started. Has he been “invisibly” asthmatic for a while, or did the flu bring it on since he was genetically inclined? He told me his throat hurt a tiny bit last night, so I found myself wishing a cold on my child, so I could blame his decreased lung function on that. 😛

At any rate, if he does truly have asthma, at least he’s in much better shape than his brother. That’s a good sign all around. But I’m still not sure whether to be frustrated and disappointed by the diagnosis, doubtful of it, or relieved that if he did roll that part of my genetic dice at least he doesn’t have it bad.

For now, time will march on, with another set of inhalers in the house.

One thought on “Asthma?”