As I mentioned a few weeks ago, we discovered that Zax’s threshold for egg white was a whopping 21 mg (3/1000ths of an egg) after entering him in a study at National Jewish Hospital. Entering that study was a long and involved process though. We’d been directed to them from the administrator of a different study–one that would aim to desensitize Zax to his egg allergy by various methods of OIT therapy. His high history of reactivity in the past seemed like he wouldn’t be eligible for the OIT study, so they suggested we try the other one first.

Zax failed his baked egg challenge when we tried it prior to entering preschool almost three years ago. I anticipated that he would again, but then I found out that our allergist likes to challenge baked egg every two years because that tolerance can change. We also had an incident at a restaurant where Zax might have eaten a hot dog bun containing egg with no reaction, but we didn’t know for sure. There was still a chance to get Zax in the OIT study, so we decided the time was ripe for another baked egg challenge.

I’ll admit that I fully expected him to fail, but the challenge would be in a safe environment and it would be useful to know one way or the other–plus I really wanted a crack at trying to desensitize him–avoiding egg is HARD!!! So we went ahead and tried a baked egg challenge in our Allergist’s office. 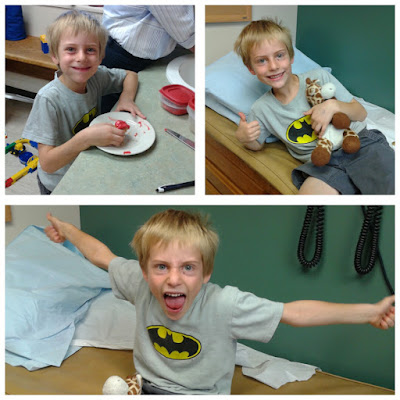 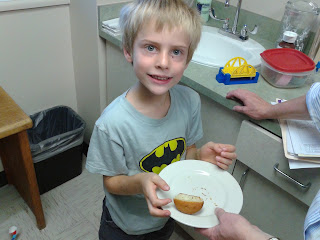 It really seemed to be by the skin of his teeth, though. They divided the muffin dose in quarters, taken at 15 minute intervals. He said his tongue felt funny after the first dose, and I figured it was over, but when I asked him if it felt the same as his confirmed reaction at National Jewish, he said no, it was different. Then he felt better in a few minutes. The nurse suggested we press on, because it really was worth it to know one way or the other. Zax was 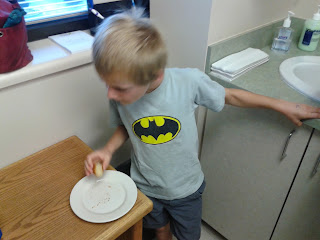 reluctant, but I assured him that they had all the medicines to take care of him if something happened and if it was a reaction, it would get a little stronger and then we’d stop. He agreed to eat a half-size dose again, but with frosting.

About five minutes later, he said his mouth felt completely better and maybe the frosting made it go away! I said maybe it just meant that he’d been nervous. He happily played and completely acted like his normal self after that, further confirming the “nervous” diagnosis.

To my complete surprise, he continued to do well for all the subsequent doses. Considering how quickly he had reacted the last time we tried baked egg, and how quickly he reacted to his food challenge at National Jewish, I was flabbergasted. By the time he’d completed 3/4 of his full dose, I texted my husband that I was feeling very optimistic. This was farther than he’d ever been before, and it was progress even if he didn’t fully pass the challenge.

About five minutes after his final dose of muffin, he reported that the back of his throat felt just a teensy bit achy. I asked if that was the same feeling as from his reaction at National Jewish, and he said Yes. We told the nurse and she examined him, but except for a red mouth from the red frosting (a potential issue that hadn’t even crossed my mind when I grabbed the frosting I already had in the fridge) she didn’t see any physical symptoms. We continued to wait, and maybe 10-15 minutes later he reported that his mouth felt fine again. And he never crashed the way he did at National Jewish–he continued to run around the room and play with all the toys with his usual energy level.

The nurse declared it a Pass, and said that if he were reacting to that 4th bite of muffin it would have gotten worse, not resolved on its own. I don’t think that’s quite right though. I think it’s more likely that we just barely touched on his baked egg threshold. He got enough to barely feel it, but his body was able to metabolize it and move on without drugs. I’ve had reactions like that, where I’ve tasted just enough to know that I shouldn’t eat it, and the feeling went away within minutes. So I’ll be starting at a lower dose at home, just to be safe.

Something I’ve learned is that my son is a trouper when it comes to his allergies. He can ramp up the anxiety pretty high for a lot of things (going on boats, putting his face in the water–pretty much trying anything new) but he’s never thrown a fit or completely refused or run away from anything I’ve asked him to do to study his allergies. We’ve explained that we need information, that he’ll be safe, and that we and the doctors will take care of him if anything happens, and he’s trusted me and done what we’ve asked, even when it has involved uncomfortable things like needle sticks and eating things that might hurt him. I don’t think about it when my son is freaking out about swim lessons, but he’s a very brave boy and I’m very proud of him!

This is a whole new world and I’ll confess that I feel somewhat adrift. I know the parameters for what we should offer Zax at home, but how does that apply to things baked outside my home? How do I determine if another child’s birthday cake meets the parameters? How about breads, do they meet the requirements? How about bakery cakes and cookies (although those often carry CC risk from nuts)? How about processed foods like snack cakes? What about breadings on fried foods? Are egg pastas cooked enough to qualify? How will this affect our restaurant ordering? How about candy (like the nougat in 3 Musketeers)? I didn’t even think of most of these questions until we were home, so I have yet to ask an expert. The only thing I know for certain is that I’m no longer concerned about cross contact with baked goods containing egg–and that’s nice, but only one small element.

Of course, the answers to these questions are probably not definite, they depend on the sensitivity of the individual. And they may all be moot, because now that he’s passed a baked egg challenge, we’re pursuing the OIT research study that I first learned about months ago. And if he qualifies for that, life will have to go on as it has been, with the only egg or baked egg that he eats being his dose for the study–for the next two years.

There are a lot of unanswered questions in our future, but we’re at a point I hadn’t really thought we’d reach. We CAN ask these questions, we CAN consider these options, and right now, that feels pretty good! 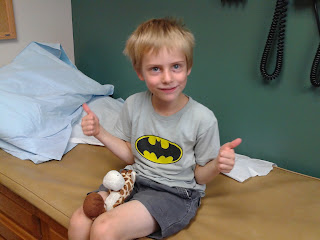 One thought on “A Pleasant Surprise”