Monday, August 3rd was a Peanut Allergy Friendly day with the Colorado Rockies! 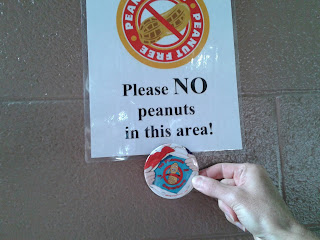 We attended a handful of Rockies games when Zax was still a babe/toddler in arms, and we had no trouble at those games. Even after his peanut allergy was diagnosed, I don’t remember having issues with the few Rockies games we attended. In retrospect, that was probably because his mobility was limited to our laps.

We took a break from games after Kal was born but then attended one last summer. It also happened to be weeks after Kal’s peanut allergy was also diagnosed but not yet confirmed, and of course both boys were far more mobile.

The result was a perfect storm of paranoia. Nothing happened to either boy at that game, but I didn’t watch any of the actual ballgame. My eyes were permanently on my kids, watching them for any hints of allergic reactions. I noticed the dozens of people near us eating peanuts, and couldn’t help but cringe at the peanut dust that was everywhere. I wiped down the seats, but the kids behind us sometimes put their feet on the backs of our chairs, and more peanut dust would appear from the bottoms of their shoes. I was a paranoid mess, and didn’t let the kids go so far as the bathrooms without their epis in tow.

I wasn’t eager to repeat that experience, so when we discovered that the Rockies were having a Peanut Controlled game, we just had to attend! 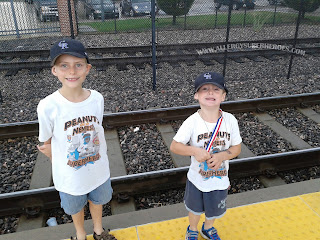 The evening started out as a hit with the boys because they got to ride the light rail train for the first time in about a year! 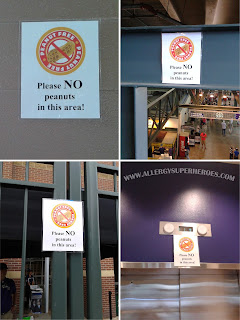 When we reached the gates we’d been told to go to, our journey to our seats was marked by “No Peanuts” signs.

The game was not wholly Peanut Free. In fact, we had to sign hefty waivers releasing the Rockies of liability if anything happened at the game related to peanuts, because Coors Field is an open air ballpark and other people in other sections were still eating peanuts. These signs limited peanut contamination along our route to our seats.

Communication about this could have been a little better, though. One of these signs was outside the entrance gate, near a press entrance. I wondered in retrospect if we’d knocked there, would they have let us in and directed us straight to the proper elevators? An employee watched me take a picture of the sign but didn’t say anything about it, and while I’d been told which gate to go to in advance, that had only been in response to my asking extra questions about park conditions, not along with the tickets I received. 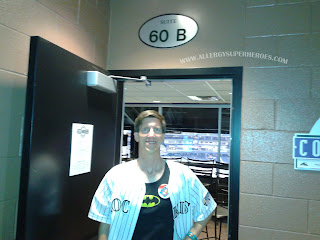 Anyway, within the park they did a pretty good job of keeping most contamination out. The entire Mezzanine Suites level in right field was designated peanut free, even though it didn’t fill up. 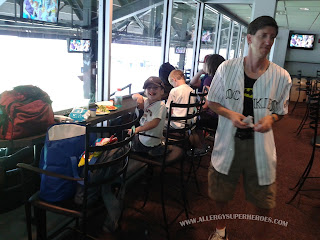 It was a pretty cool area, and one that undoubtedly usually costs much more money. It had an inside suite area with counters, tables, and big screen TVs plus a two-row balcony with the actual assigned seats.

We had a good time meeting other Colorado members of the Food Allergy Community, some of whom we’d previously seen online. We met the family of Betsy from FAACT and Lauren from the Denver Chapter of the No Nuts Moms Group. We also got to meet Duffy, a Peanut Sniffing Dog, and his family, along with lots of people touched in some way by peanut allergies. 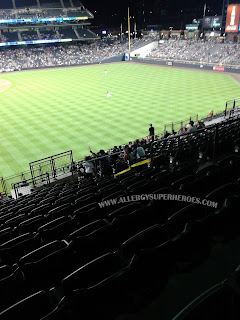 This picture isn’t pretty, but it’s to show that they had several rows roped off with nobody sitting in them in front of our suites. This was to create a Peanut Free Buffer Zone. 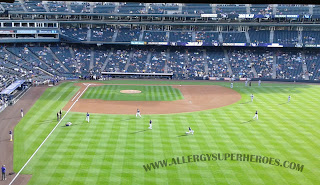 These two little dudes were happy to show off their Allergy Superheroes “Peanuts are my Nemesis” shirts and enjoy the game! 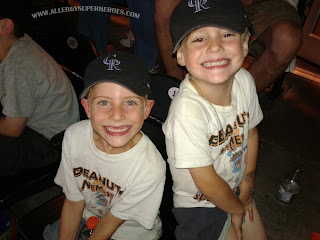 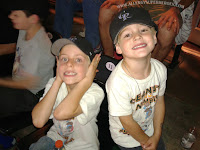 It took a couple shots to get the goofballs to both smile at the same time though. 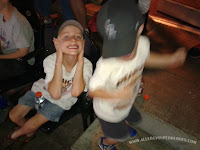 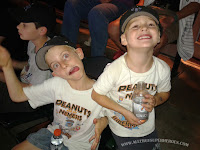 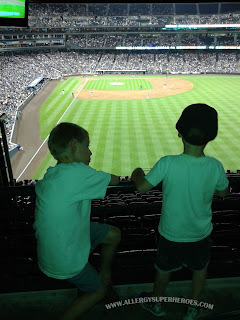 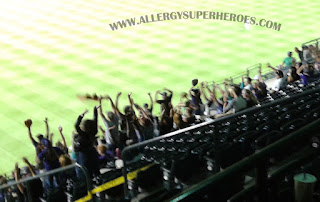 I managed to catch The Wave in action! 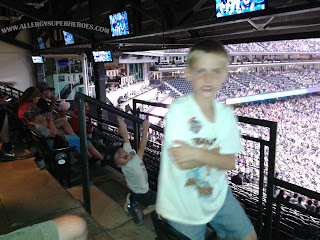 Grrr, the Mariner’s scored! (Actually, I think he was just grimacing because he didn’t want his picture taken.)

One huge benefit of having the Peanut Free section in a suite was that the kids had more room to roam around. Which is good, because my kids don’t sit still for very long. 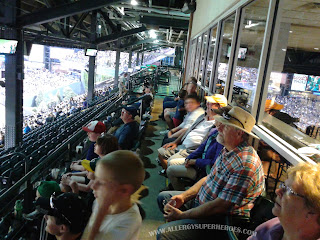 There were six suites, all in a big long row. I think the Peanut Free crowd filled about three of them. Here’s a pic of part of our section. 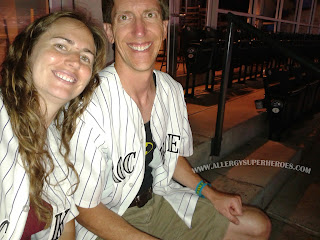 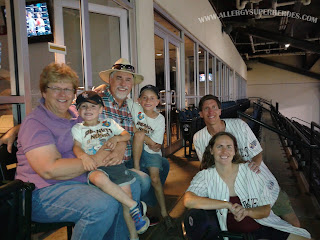 This was our group: myself, hubby, the boys, and my parents.

The Rockies trailed for most of the game, but they managed to make the 9th inning fun. They started the inning trailing 4 to 8 and scored three runs. They got into scoring position again too. The crowd (what was left of it) got really wild–which the boys loved. That was probably the only inning they actually watched all of. 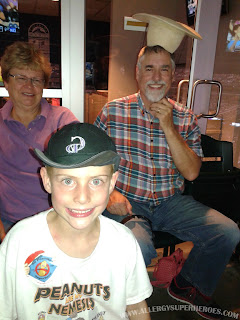 Poppa and Zax put on their Rally Hats. 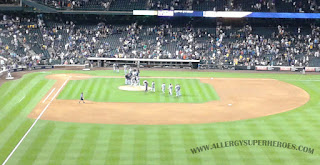 Unfortunately, they didn’t pull it together. The Rockies still lost 7-8. 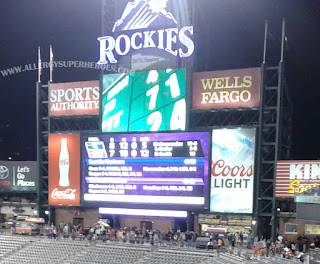 I wish I could say the evening was without incident, but unfortunately, I can’t. A little more than halfway through the game, my children remembered that Coors Field has a playground, and of course they wanted to go. They had played at it without incident last year, so I agreed to let my dad take them for an inning or two. (I did make his eyes go wide when I handed him the bulging bag of epis to take with.)

The boys were fine after they came back from the playground (I made them scrub their hands), and as we exited the ballpark after the game. As soon as we got out, I pulled out the wipes and had everybody scrub off their hands again (especially as we had deviated from the “peanut safe route” in order to visit the restrooms on the way out.)

I had thought we’d had a successful night, but riding the light rail home, Zax started rubbing at his face. I asked him not to touch his face and told him I’d scrub him down more thoroughly when we got home, but I didn’t want him getting any possible peanut residue on his face. He rubbed a few more times anyway, and then rubbed his eyes.

At that point I tried to patiently explain how germs and allergens can enter our bodies through our eyes while hoping that nothing was going to happen. However, when we reached the car he reported that his throat felt funny. We dosed him with Benadryl, and fortunately that took care of it.

I’m sure he had peanut residue on him somewhere. He could have picked something up on the way out of the park, but more than likely it happened at the playground. All the other kids playing there had been walking through peanut dust and peanut shells, and my dad later reported that Zax even rolled down some ramps in the playground. That would have easily gotten it on his skin and clothes, and it was a short trip into his body from there. I later found myself explaining mucous membranes to my six-year-old, hoping he would understand the concept of not touching eyes/nose/mouth/ears/etc for next time.

We did have a good time overall, and I wouldn’t rule out doing it again. However, I will nix the idea of the playground. The boys will just have to make do with terrorizing the suite when they need to move. Or they can go outside the suite and run up and down the peanut-free hallway leading to it.

Having food allergic kids is a constant learning process, isn’t it? 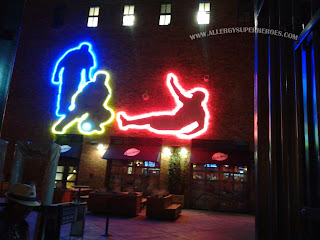 For more information on Peanut Allergy Friendly Rockies games, you can watch this link:
http://colorado.rockies.mlb.com/col/ticketing/peanut_allergy.jsp