I recently learned (and shared on social) that FARE has joined forces with attorney Mary Vargas to file a complain with the Department of Transportation against American Airlines, citing that their posted “Nut Allergy Policy” is in violation of federal law. Now, I don’t personally know whether filing a complaint with the DOT will accomplish anything. It isn’t a lawsuit, so does the DOT do anything when complains are filed, or is this just a symbolic gesture? Does the DOT tend to ignore complaints from individuals, but the fact that a powerhouse like FARE is issuing the complaint might mean that more will happen? I don’t know. 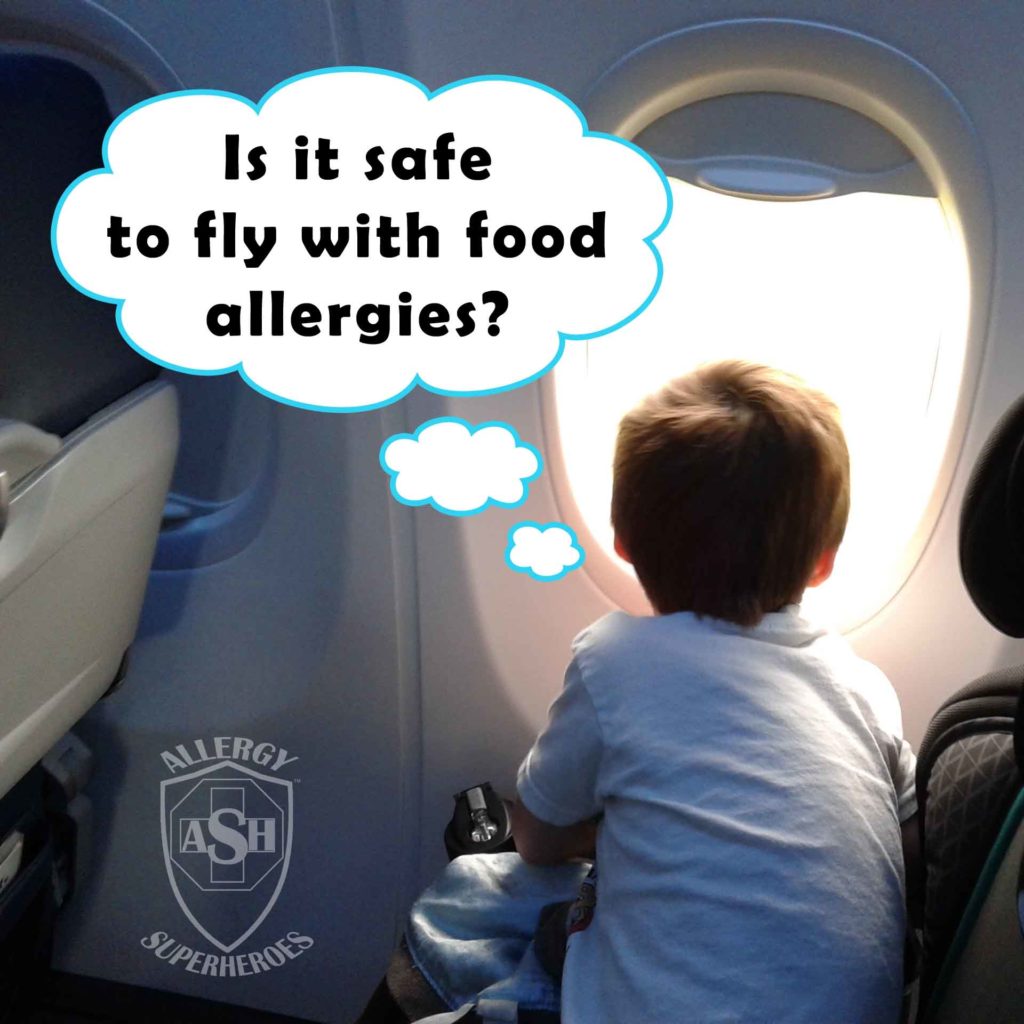 When sharing FARE’s press release about the complaint, I wanted a picture so I took a screenshot of American Airlines’ policy–and what I found with it made me shake my head, and want to shake someone else, too.

The nut policy appears at the bottom of a page about special meals and diets. Apparently, meals for special diets can be requested in advance, so long as your flight offers meal service (overseas, plus cross-country flights for First and Business Class passengers.) American offers meals that accommodate special diets for religious reasons (Kosher and Muslim), philosophical preference (Vegetarian/Vegan) and certain medical needs (diabetic and gluten free.) 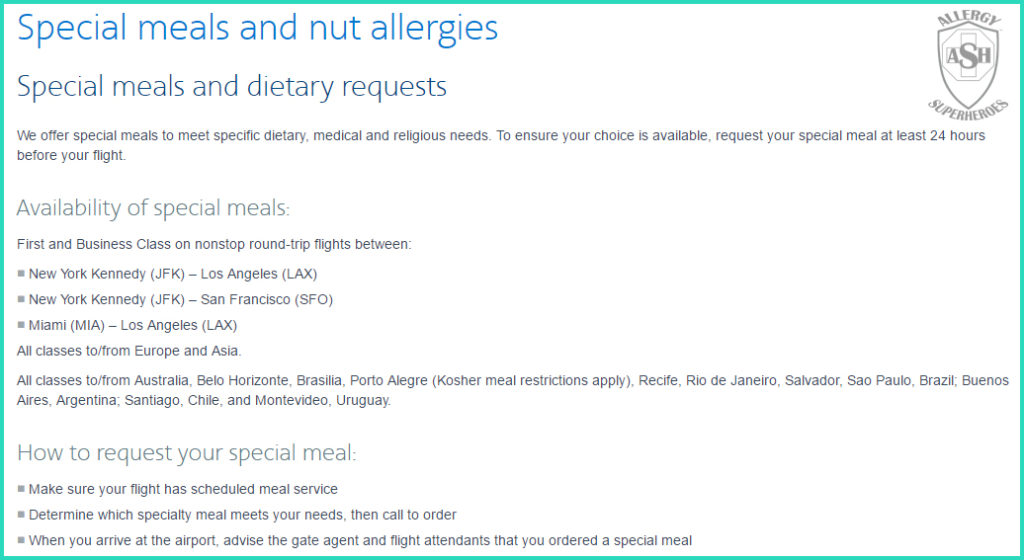 After outlining these options, they state that they will not make any accommodations for passengers with nut allergies, and advise passengers to take “medical precautions to prepare for the possibility of exposure.” Because we can just pop a Claritin before the flight and we’ll be protected if exposed–give me a break.

It’s the double standard here that really bothers me. They’ll go so far as to make special meals for religious reasons, they’ll accommodate voluntary dietary preferences, and they’ll go out of their way to create meals for medical needs such as diabetics and the gluten free (whether such meal is certified, protected against cross contamination, and trusted by the Celiac community is not something I can speak to) but allowing an allergic passenger extra time to wipe potential allergens off of their seat and tray table is too much to ask? B.S. Alert! Basically, they’re saying that they’ll accommodate preferences and non-life-threatening medical conditions, but will do nothing for the passenger at the greatest risk of dying at 35,000 feet.

The only sense I can make of this is that maybe they’re only offering meals with the least risk of liability–when it comes to the meal itself. A Jew or Muslim isn’t going to stop breathing if their meal is accidentally prepared incorrectly. The risk of a person dying from a tainted vegan meal would be limited to the egg-or-dairy-allergic passenger who assumed the meal would be safe. I can’t speak to the specific risks to a diabetic passenger, but the vast majority of gluten-free passengers are also unlikely to die in the air if they consume gluten. A wheat-allergic passenger could go into anaphylaxis from wheat contamination, but Celiacs will not.

Don’t get me wrong, Celiac Disease is a very serious medical condition with dietary precautions rivaling those of food allergies, but “getting glutened” does not involve cardiac arrest or the closing of the airways. So I find it ironic that while American Airlines is accommodating the least riskiest meals, they are making the passengers who could disrupt the flight with the most dire, immediately life-threatening medical emergencies more likely to have an incident in the air.

Now, this double standard doesn’t have anything to do with the official FARE complaint against American, it’s just a strange and discriminatory policy that I noticed. The actual complaint is because American Airlines states that they cannot (read will not) allow pre-boarding for an allergic passenger to wipe down their space, and disability law states that it’s illegal for an airline to discriminate against a disabled passenger who needs extra time to board. Cleaning your personal space certainly makes air travel much safer for allergic passengers–and it does take extra time. Especially if you’re traveling with a small allergic passenger who is likely to touch everything and put everything in their mouth. 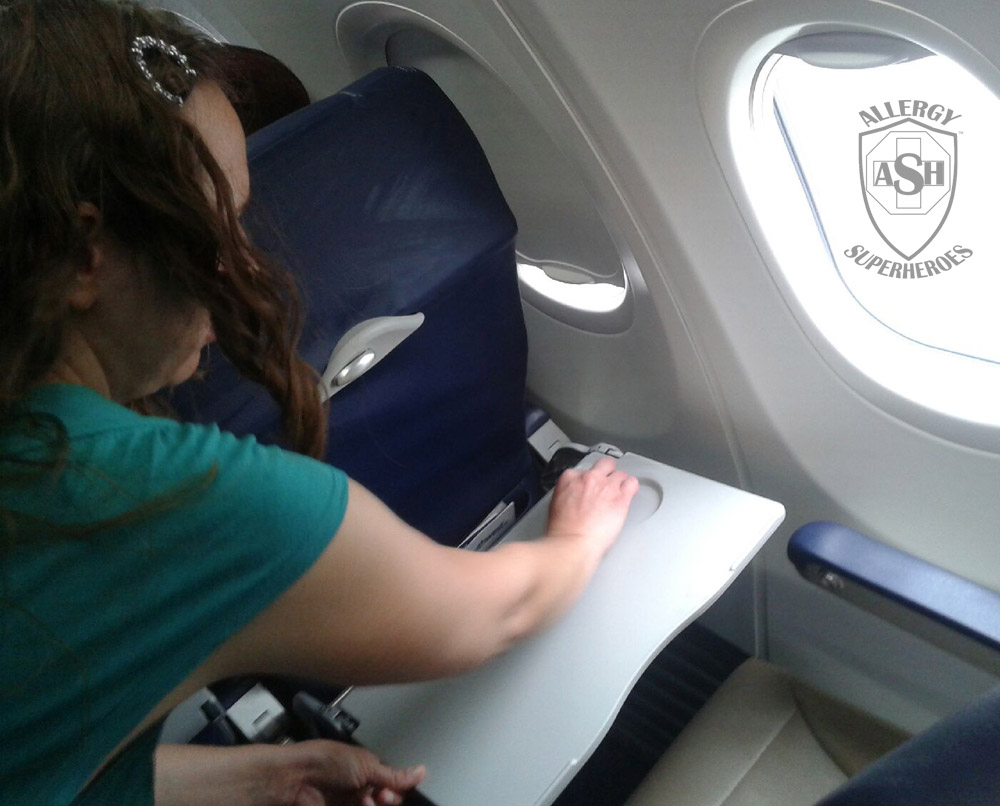 I hope something comes of this complaint. I also hope that someday soon we can get all airlines to acknowledge the risks of allergic passengers going into anaphylaxis in the air (regardless of what they’re allergic to) and for them to adopt more uniform and accommodating policies across the board. Because regardless of whether we’re traveling for business, for military service, to a funeral, or for a vacation, we all deserve to be safe in the air.

Update June 2018: The number of American’s “special meals” has more than doubled, but their nut allergy policy remains the same.