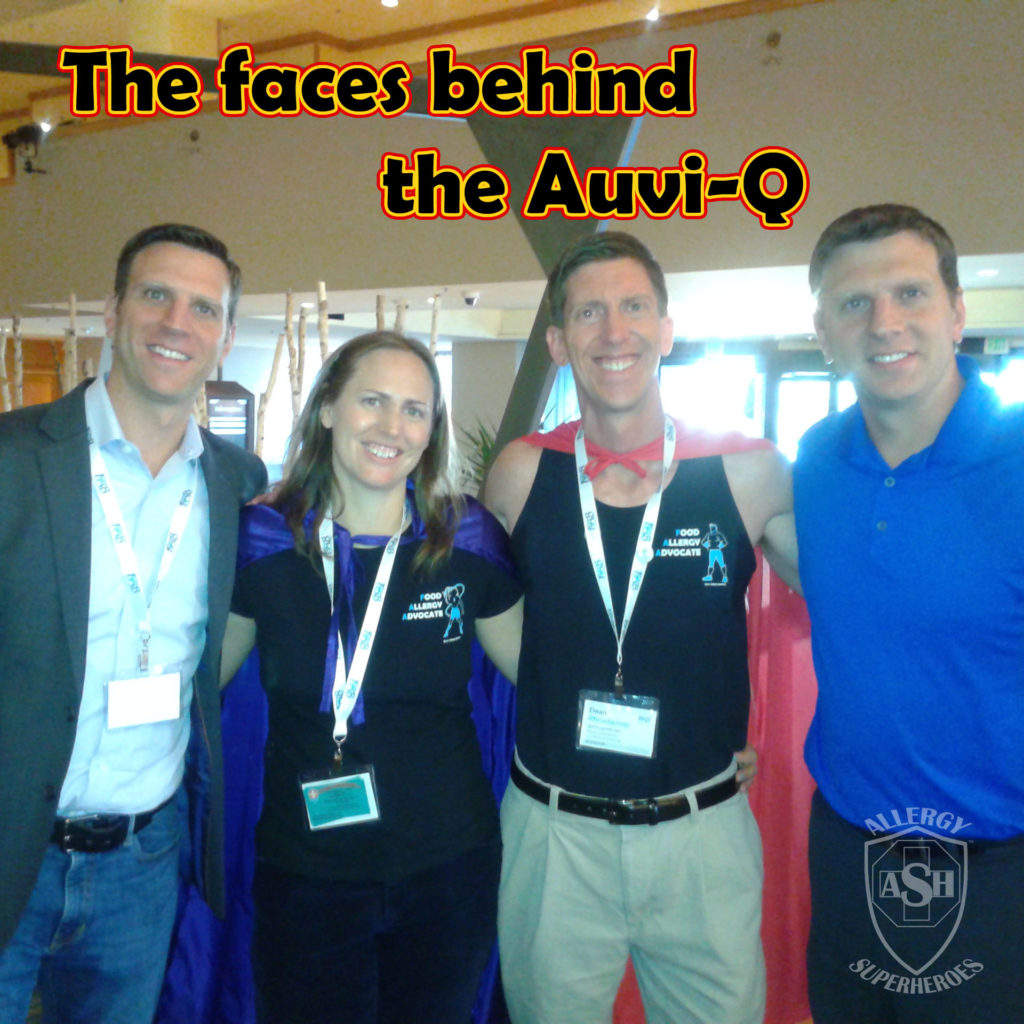 In light of yesterday’s announcement that the Auvi-Q will not only be returning to market, but will be doing so next month, I wanted to share more of the information I’ve learned about the company and the people behind it.

I’ll confess that I was ambivalent about the Auvi-Q the first time it was available. EpiPen had been a household name in my life since the 1980s, so it was comfortably familiar to me. In addition, my doctors had never prescribed the Auvi-Q, and as I began to pay attention to food allergy conversations online, I heard the occasional tale of doctors not trusting the Auvi-Q or of it having an even bigger expiration problem than the Pen.

It began to pique my interest in the months prior to its recall, though. We met some representatives from Sanofi at our FARE Walk and our kids fell in love with the talking trainers. Both boys soon declared that they wanted Auvi-Qs. But it wasn’t time to refill anything, and I wasn’t ready to switch just yet.

Then we learned that the twin brother Auvi-Q inventors were expected at the 2015 FABlogCon, and we learned about their history. We were fascinated by the fact that they tailored their entire education around making sure they had the skills they would need in order to turn their dream auto-injector into a reality–an auto-injector that would overcome the design flaws that everyone had accepted for decades. This was no small feat when a Ph.D. was needed! And the Auvi-Q does has many improved features: it fits easily in a pocket, it prevents accidental needle-sticks after injection (the old EpiPen, just like the current Adrenaclick, left the needle exposed afterwards), and it talks you through the process of using it. It was even named for the extra cues it gives you: Auvi-Q =  Audible and visual cues (Q). We were looking forward to learning more!

We didn’t get the chance though, because the Auvi-Q recall came a month before FABlogCon in 2015. The brothers’ talk was removed from the agenda, and while Sanofi (the pharma company who distributed the Auvi-Q at the time) was the Platinum sponsor of the event, they only put in a brief appearance–mainly to distribute information on the recall and what to do if you still had one.

Most people probably thought the story would end there, but we remembered the bio we’d read about how Eric and Evan Edwards had tailored their education around the creation of the Auvi-Q. They had their own small pharma company, kaléo, and they were successfully selling an opiod overdose autoinjector using the same technology as the Auvi-Q. With the dedication we perceived that they had toward their product, we felt confident that they wouldn’t give up on it, and that the Auvi-Q would return, even after it was dropped by Sanofi.

We were pretty excited to hear the news back in October when kaléo announced that the Auvi-Q would indeed return, under their own company. We were even more excited to hear that kaléo would take center stage as Diamond sponsors of FABlogCon in 2016, and that we would have the chance to hear from them directly.

Eric and Evan Edwards (whom I have privately come to think of as “the kaléo brothers”) spoke during the Welcome Party on Friday night, and it was very informative. I saw plenty of echoes of my own past when they described growing up in the 80s as the only allergic kids they knew. Their list of allergens was more extensive than mine (they’re both allergic to peanuts, tree nuts, and shellfish, Eric is allergic to fish, and when they were kids Evan was also allergic to fish and they were both allergic to eggs) but the experience was much the same. 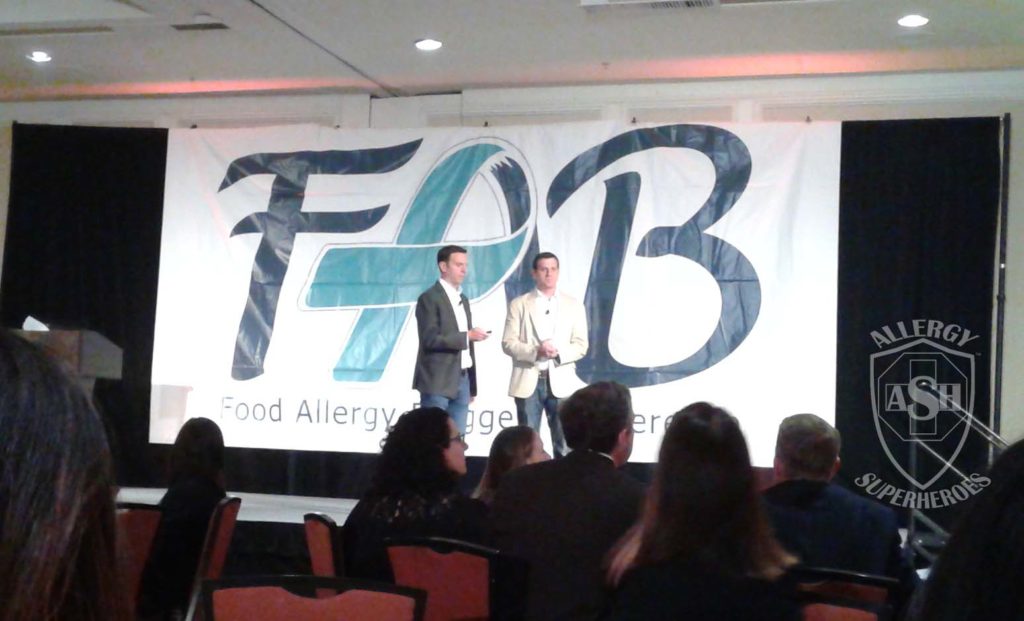 They also went through a similar experience as me when they had kids–they both have children with food allergies. It’s an interesting transition–going from patient to parent–and I wanted to let out a fervent “YES” when one of them remarked that parenting kids with food allergies is a lot different from having them yourself (I only refrained because I was losing my voice.) This is a truth I didn’t really acknowledge until my allergic kids started school, but it is such a big difference that was a big motivating factor for starting Allergy Superheroes.

After giving us some background, Eric and Evan went on to talk about why the Auvi-Q was recalled the year before and what steps they’ve taken to ensure its safety before returning it to market. They informed us that they’d identified the problem (though they chose not to specify what it was) and that they’ve automated the production process with 100 quality checks along the way.

They feel confident that the Auvi-Q will be problem-free when it returns this February.

Kaléo is clearly a very passion-driven company. One of the brothers got tearful as he told the room of attendees how hard it was to go to his kids’ school and replace their Auvi-Qs with a competitor. His kids’ safety was the most important thing, but that was not an easy action to take. And to anyone concerned that their trust in the Auvi-Q has been permanently shattered, they submit that they wouldn’t return it to market if it wasn’t safe enough for them personally. Their own lives will depend on the proper functioning of the Auvi-Q, and the lives of their children. They aren’t getting rich off of other people’s health problems without ever having avoided an allergen or witnessed anaphylaxis–in that sense they’re just like us–living it every day.

In addition to their talk, Dean and I had the opportunity to chat further with the kaléo brothers–both socially and in a meeting where they gave us more information (and expressed and interest in Allergy Superheroes–very cool!) We discussed all sorts of things from price to insurance to the pharmaceutical industry to Legos.

Lately, we’ve all been upset by the sky-high cost of the EpiPen, and we spent a good deal of time discussing that with Eric and Evan, and with one of their reps just last month. We already know that the EpiPen is old technology, so Mylan doesn’t have any start-up costs associated with their price hikes–whereas new auto-injectors have all sorts of fees that they have to pay off. In short, any auto-injector that is new to the market has many more reasons to charge higher prices than the decades-old EpiPen (which has only undergone one redesign in my lifetime.)

From the moment we first heard from them, Eric and Evan have been determined to make the Auvi-Q accessible. We’ve learned all kinds of things recently, including that pharmacies charge a bigger percentage to small pharma companies and smaller fees to big pharma, and that drug companies can pay rebates to exclude competitors from drug formularies. Regardless, Eric and Evan have been working to make sure that the Auvi-Q will be accessible to everyone who needs it. They are working directly with insurers to try to include the Auvi-Q on every formulary, and they came up with their revolutionary AccessAbility program to get the Auvi-Q cheaply into the hands of 95% of Americans. (See yesterday’s post for further details.) Things will undoubtedly change as time passes, but for now they want to send the clear message that there is a large demand for the Auvi-Q–and for it to be affordable!

They’re also pledging to work hard to keep expirations at the 12 month or greater mark, because we all know how frustrating it can be to receive epinephrine that expires in less than a year.

My mom has spoken of carrying the Ana-Kit, a pre-loaded epinephrine syringe that existed when I was small (which I barely remember) but I’ve been an EpiPen carrier for the better part of three decades. EpiPen is a household name for me (and making it so for most Americans is something Mylan has worked very hard towards in recent years.) But through all of the changes we’ve seen, I’m excited about the opportunity to carry a new auto-injector the next time our EpiPens expire. It will be refreshing to support a company owned by true members of the food allergy community, who care more about the people they protect than turning a huge profit. There really couldn’t be a bigger difference between the kaléo brothers and the greed we’ve seen from certain executives at Mylan. 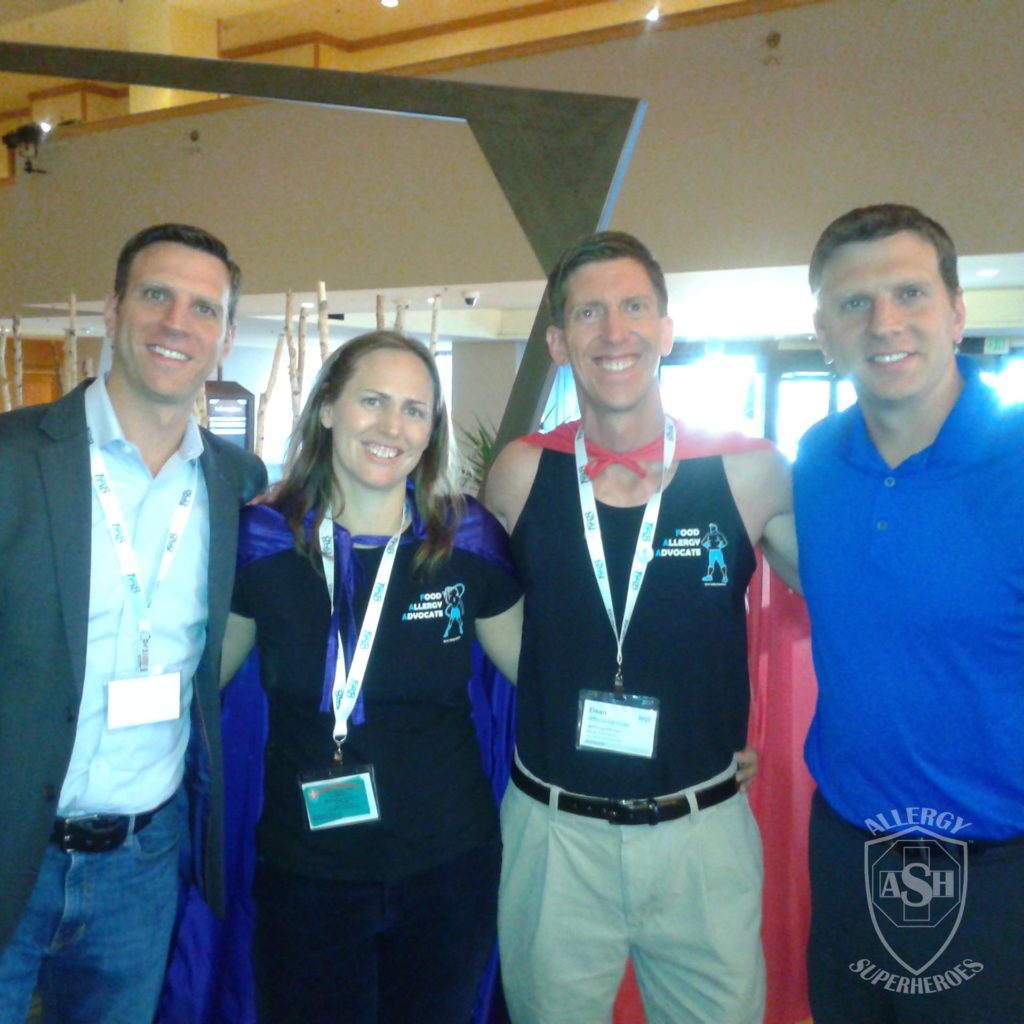 How Auvi-Q AffordAbility Works: The Nitty-Gritty

Auvi-Q to Return on Valentine’s Day!

One thought on “The Faces Behind the Auvi-Q”