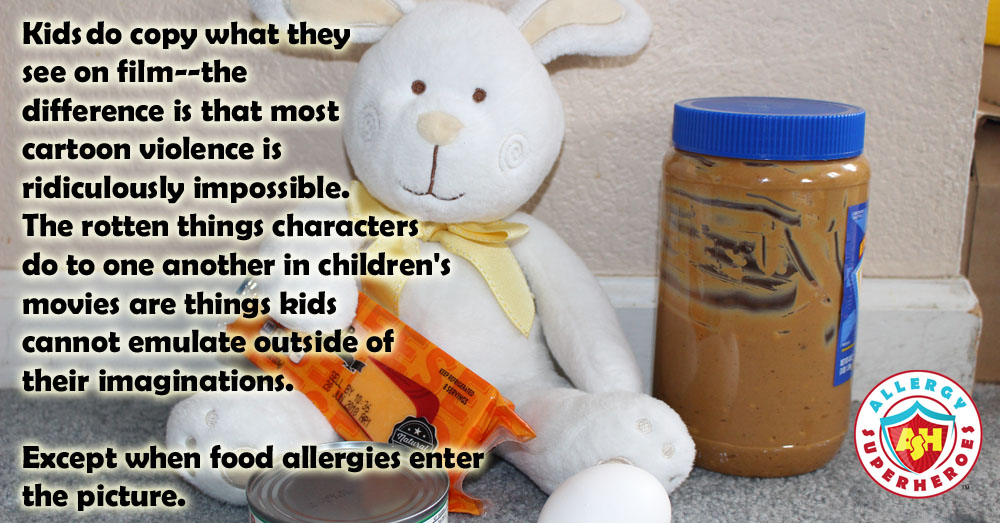 The Peter Rabbit movie wasn’t something I wanted to see anyway. I’d seen a few previews and it looked to be full of the sort of humor that I don’t find funny, so I wasn’t making plans to see it–but after hearing reviews and the response from the food allergy community, we will definitely not be seeing this movie.

According to online sources and friends, the rabbits (they ARE supposed to be the protagonists, right?) intentionally and maliciously throw allergens into someone’s mouth. He goes into anaphylaxis and has to use epinephrine. Earlier in the movie, upon learning of the allergy, Peter mocks it and says that allergies are made up for attention.

This treatment of food allergies is, unfortunately, pretty normal within the entertainment industry. Instead of using their massive platform to highlight the dangers of food allergies, Hollywood seems bent on placing us at the butt of sick joke after sick joke. It’s no wonder the general public is so slow to catch on to just how serious food allergies are.

Reactions to this movie, even within food allergy circles, have been widely varied, from those wishing to boycott the film to those who feel others are making way too big a deal out of it. And not remotely surprisingly, among those without food allergies (especially on opinionated Twitter) the second opinion is quite prevalent.

Everyone is entitled to his or her own opinion of course, and my opinion is that this sort of treatment of food allergies in mainstream Children’s Entertainment is irresponsible and dangerous. Let’s look at a few counter arguments and we’ll talk about why.

We aren’t giving kids enough credit. They recognize that a battle between a man and a rabbit isn’t real.

Real or not, kids emulate what they see on film. My own boys have acted out bits of nearly every movie they’ve ever watched. And when a movie captivates the imaginations of large groups of children, complicated games with multiple players will spring up on the playground, with everybody playing a different part. Kids do copy what they see on film–the difference is that most cartoon violence is ridiculously impossible. The rotten things characters do to one another in children’s movies are things kids cannot emulate outside of their imaginations. Filmmakers seem to recognize that real weapons (and real death caused by real weapons) don’t have a place in light-hearted children’s entertainment. 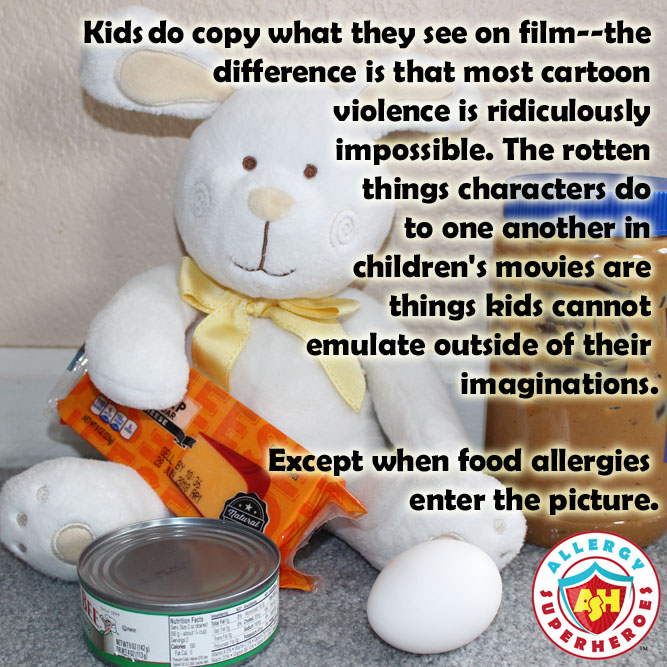 Think about it. The most “real” fighting that characters do in children’s entertainment tends to be martial-arts-style punching and kicking. Beyond that, characters shoot each other with with freeze rays, lasers (or laser vision,) and other fancy weapons that don’t really exist. They attack each other with robots, trained animals, magic, and other ridiculously impossible contraptions. They catapult one another through the air, launch them into outer space, and inject them with drugs that make them go crazy. The only “real” weapons tend to be wielded by bad guys with horrible aim and who are completely unmatched against their superhero counterparts. When kids play out what they’ve seen on screen, they can use props or just their imaginations, but they can’t actually do any of these things to one another.

Except when food allergies enter the picture.

And this is the biggest problem with this sort of portrayal of food allergies. Allergens are not restricted substances. It’s ridiculously easy for children to get their hands on foods that can hurt a classmate, even if certain foods have been banned from the classroom or even the entire school. And it’s ridiculously easy for someone with malicious intent (or even a dumb kid who hasn’t thought things through) to bring someone with food allergies into contact with their allergen. And the sad reality is that the resulting reaction, if not treated promptly and properly (and rarely, even when it is) can result in death.

This use of food as a weapon is, perhaps, the only behavior children watching the movie could actually do to one another, and it is a behavior that could have very unfortunate results. Food allergy bullies have an inordinate amount of power over their victims, and their actions can have results far out of proportion to the the act. Most acts of bullying result in shame, fear, anxiety, and/or physical pain, but except for the bullies who sneak lethal weapons into school, death is seldom a possibility. But let’s not forget that a young man actually died in the U.K. last year, following a bullying incident in which someone either flicked cheese into his mouth or snuck it into his food (reports were not consistent the last I’d heard, but the bully was detained and was facing charges.)

Okay, but this just provides an example for our kids of What Not To Do

This argument may sound good at first, but let’s be honest–how many children will actually have that conversation with a trusted adult? Food allergy families will likely discuss this scene if they see the movie, but food-allergic children are not the ones who need to be told that this behavior is unacceptable. Certainly food-allergic children may bully other children, but in this case these kids are far more likely to relate to the victim. Lots of allergic kids have anxiety about their food allergies, and many have already experienced food allergy bullying of some kind. They’re going to be more worried that someone may do this to them, not thinking of this as an idea to use on someone else.

Food allergy families can and should discuss how to respond to food allergy bullying, of course.

And what’s more, the children who most need to have this conversation are the least likely to get it. These are the kids who may already be bullying kids regarding their food allergies, or who are considering doing so. They are the ones who don’t believe that anything bad will really happen, or who want to induce pain (though their understanding that it can cause death is usually not completely there.) And–this isn’t always the case, but–they are often the ones who hear their parents complain about allergic children being a major inconvenience. They don’t see their parents modeling compassion, they see their parents exhibit impatience and irritation (or worse) whenever someone else’s food allergies come up. These kids won’t hear their parents say “don’t do that,” in regard to this movie. Instead, they’ll hear their parents laugh, and will take that as tacit approval to belittle and bully those with food allergies in the future.

This wasn’t bullying it was a battle, and anyway, kids do experience bullying.

When bullying does happen in kids’ movies, it usually tends to be done by the antagonists to the protagonists. Many kids relate to being bullied, and this can provide the character with motivation to grow. In the rare event that the protagonist is doing the bullying, it is usually at the beginning of the movie, and is used as a marker for the personal growth they are about to undergo. The fact that the protagonists of Peter Rabbit are the ones using food as a weapon makes the scene even more disturbing, and increases the likelihood that children will think this is okay.

And as to this being a battle, see my first point.

It’s happened in movies before.

Really? Someone making a bad decision before is an adequate excuse for doing it again?

And yes, people were offended by previous movies with poor treatment of food allergies. Your ignorance of their response does not mean it didn’t happen.

I know someone with food allergies who thought it was funny, so stop whining.

As previously mentioned, reactions to the film have been varied from food-allergy families and the non-allergic alike. Some people have higher levels of anxiety about their allergies than others–so while some kids will be horrified, others will barely notice. But normalizing violence using food allergies will lead to more people accepting it, which can lead to more people doing it, regardless of whether or not everyone is bothered.

It’s ultimately up to parents to determine if they want their children to view this movie, or any movie. We all make different decisions on what content is or is not acceptable to us as parents, and at what age kids should be exposed to different kinds of movies. Based on what we’ve heard, we choose not to watch this movie. I don’t want to subject my kids to watching someone be attacked by their allergen, nor do I want to support this movie with our money.

Characters with glasses can appear in movies without having them be intentionally broken, stolen, or the character being ridiculed for needing them–it has been a plot device, but except for experiencing bullying (above) this sort of humor isn’t very common these days. Likewise, characters can appear in wheelchairs without any additional drama than showing their difficulties in getting around. The word “retard,” originating for people with mental disabilities and then being used as a derogatory for being stupid, has gone out of favor to the point that young kids often haven’t even heard it. I hope for the day that Hollywood and the general public treat food allergies with respect for the serious and dangerous issue that they are, and that using them as a cheap punchline is no longer acceptable.