A month ago, my husband’s brother got married to a wonderful woman.  It was a beautiful ceremony, and in our family, one of the most exciting parts was our children being ring bearers for their uncle and new aunt. 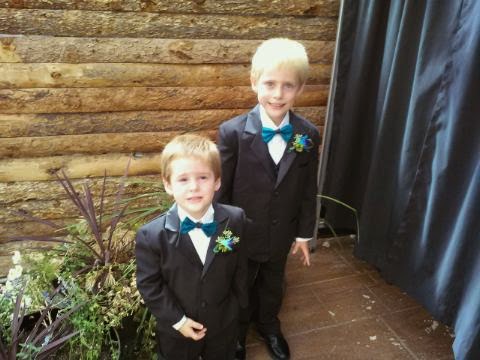 This was only the second wedding we’ve been invited to since having children, and the first we’ve been able to attend.  A few weeks before the ceremony, it dawned on me that I would need to provide Zax with a cupcake for the wedding, just like I do for birthday parties.  And then I wondered if I could plan ahead for the wedding food.
I got the caterer’s phone number from the bride and called ahead.  I easily learned that the wedding cake would be safe for Kal and myself (no peanuts or tree nuts–it did have egg, of course,) but beyond that, the caterer seemed less than eager to discuss the subject with me.  I stated that we would not only be at the wedding but in the wedding, I specified our three allergy concerns (peanuts, tree nuts, and eggs) and asked if we could find out which items would be safe for us to eat.  The man rattled off a few things he knew off-hand–a certain dip had pecans, a certain salad had almonds, the pastas would have egg–and then said he wasn’t sure of the rest and would have to pay attention while preparing the foods.  They would know the day of the wedding.  Would he specifically be at the wedding?  Yes, plus his employees would know all this information.  Not exactly what I’d been going for, but at least I knew who to contact on the wedding day.
Fast forward to the big day, and the ceremony was beautiful.  Our kids provided plenty of “cute” moments, like blowing kisses down the aisle and Zax not wanting to leave the podium after delivering his ring.  Because all our menfolk were in the wedding party, we stuck around for the pictures afterwards.
By the time I got into the reception hall, the appetizer station was pretty picked-over.  The caterers were milling around behind the buffet table, though, which gave me a good opportunity to ask them about allergens.  I went up, introduced myself, discovered which one was the boss, and repeated my query regarding which foods we could safely eat.
It was at this point that I realized this caterer was not very allergy aware.  The pecan dip he’d previously mentioned was smack in the middle of the veggie display on the appetizer table, so he told me not to have any dip.  No recognition of the fact that the dip was streaked all over the remaining veggies from where people had spilled it.  No raw veggies for me (and a shame I hadn’t made it inside earlier.)
Zax couldn’t eat any of the salads, due to toppings or the dressings.  He couldn’t have the bread, because it had egg.  He couldn’t have any pasta dishes for the same reason.  Many of these answers came after a good deal of pondering.  The green beans were safe, as was the roast beef.  And the chicken… “What do you think?” the head caterer asked one of his employees.
Talk about exasperation.  The only reason I hadn’t pressed for him to check his recipes and call me back was his assurance that he would know this information the day of the wedding.  I had warned him of our allergens, so he knew what I needed.  In fact, I would think that any caterer ought to be familiar with the top 8 allergen content of their menu because of the rising incidence of food allergies.  (Or maybe that’s just wishful thinking.  It has been a long time since I’ve been at a wedding.  I guess it’s not any different than a restaurant–and they’re all over the place.)
So Zax was able to have green beans, roast beef, and whatever raw fruits and veggies I could salvage for him from the appetizer station.  He didn’t want to eat the beans without his blue cheese dip, and didn’t want the roast beef without ketchup, so he survived the day on a handful of raw carrots and strawberries.  And you know, I hate it when people put egg in their bread.  At least if Zax could have eaten that, I could have filled his tummy with calories if not many nutrients.
Kal had a wider selection of safe foods, but still didn’t eat much.  He could’ve had salad, but doesn’t like it.  He could’ve had meat, but isn’t much of a carnivore yet.  He tried the macaroni and cheese, but this being gourmet wedding food with pepper and other spices mixed in, he didn’t like it.  He survived on Zax’s diet plus bread.
The boys didn’t care too much that their lunch was small.  They had a reception hall to explore, and grandparents to drag around the grounds.  Plus, there was cake.  How often are you allowed to fill up on cake in the middle of the afternoon?

Of course, while the rest of us ate wedding cake, Zax ate the cupcake I brought along.  My goal had been to make it resemble the wedding cake, if only slightly.  My blue was too turquoise, it should have been teal, but oh well.

So what did I learn from this experience?