This soup is an old favorite. It’s certainly not the healthiest soup in the world, but as long as you can handle dairy, it sure is tasty! It has a beer and cheddar cheese soup base, livened up with some spices and kielbasa sausage. Great for cold days, but it cooks fast enough to be good on hot ones too because you aren’t heating up the kitchen for very long. In fact, the speed with which I can throw this soup together is one of my favorite things about it! 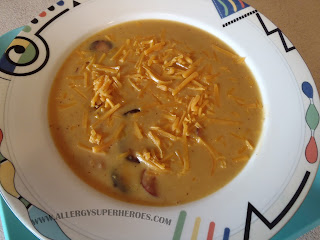 Someday, I will find a homemade Cheddar Cheese Soup recipe that I will love, and that will do away with all of the extra ingredients in Campbell’s. For now, however, I am using Campbell’s because that’s part of what makes this recipe fast! (A quick Google search found this recipe for a homemade soup base. I can’t vouch for it, though. If trying this recipe, I’d mix some of the flour into the cheese before adding it to the liquid so it doesn’t clump–a trick I learned from fondue.)

Polish Sausage Soup
Contains soy, wheat, and quite a bit of dairy 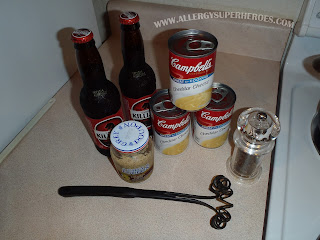 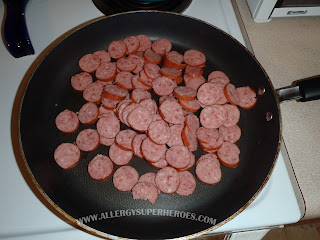 Chop the kielbasa into thin slices and then brown them in a frying pan. Transfer to a plate with a paper towel on it and blot with another paper towel to remove more of the grease. 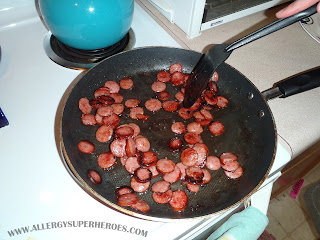 Browning the kielbasa is technically optional as they’re usually precooked, but I do it for two reasons: 1) I think it tastes better browned, and 2) it removes some of the extra fat. 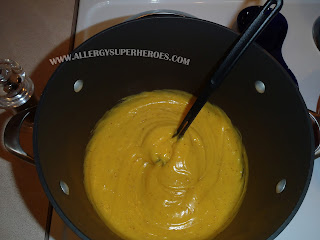 While the kilebasa cooks, whisk together cheddar cheese soup and mustard in a large soup pot. 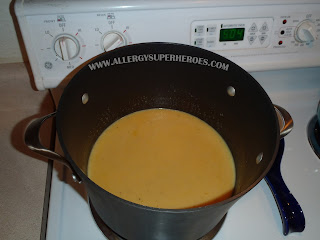 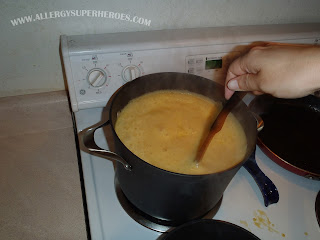 Bring to a careful boil, making sure to stir frequently. As the alcohol boils out of the beer, it threatens to boil over, so keep a watchful eye as it increases in volume and be ready to stir rapidly and turn the heat down as soon as it starts to reach the boiling point. 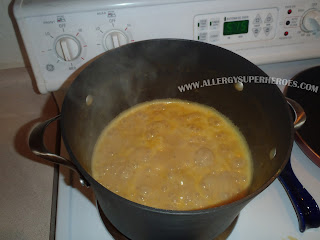 Reduce heat to medium and add the browned kielbasa. Simmer for 10 minutes. 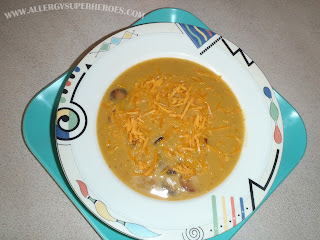 And don’t forget to check out all the cool gear we have to protect food-allergic kids over at www.allergysuperheroes.com!