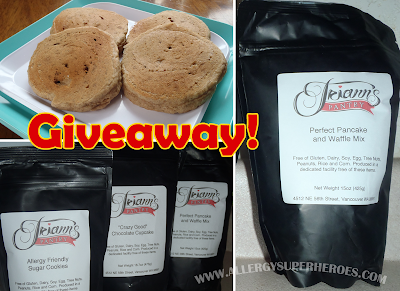 We’ve teamed up with Triann’s Pantry to offer you a special giveaway! My husband Dean (who is our Sunday breakfast guru) tried out their Perfect Pancake and Waffle Mix and reviewed it for you below! Then beneath that is the Rafflecopter for the Giveaway!

Dean here again with a guest blog post. I first came across Triann’s Pantry through a promotion they were doing on Twitter to help the Food Equality Initiative (an allergy-friendly food pantry). For every order Triann’s Panty got, they sent a duplicate to that organization. 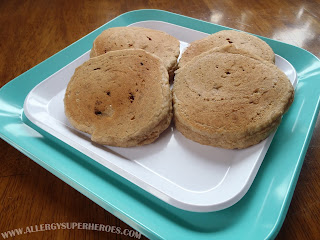 I sent them a message through Twitter that it was a wonderful promotion and we shared a similar experience of how a layoff from a long term job resulted in the creation of our allergy-friendly businesses. They offered to send us some samples of their products. We looked over their website and there were so many delicious looking mixes that it was hard to decide! We narrowed it down to three and said surprise us.
Surprise us they did. Shipping was impressive, it arrived in only a couple of days. The second surprise was they sent us all three: Perfect Pancake and Waffle Mix, Crazy Good Cupcakes and Allergy Friendly Sugar Cookies. So I decided to review their pancake mix since I make pancakes almost every Sunday morning. It’s known as Pancake Day now to the kids.
The mixes were wrapped in red tissue paper which went nicely with their black packaging. 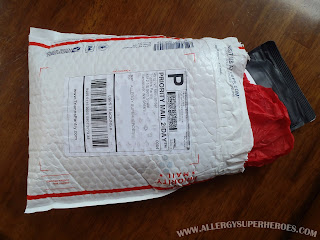 Right on the front of each package it tells you which of the main allergens it’s free of. The pancake mix was free of gluten, dairy, soy, egg, tree nuts, peanuts, rice and corn. It’s also produced in a dedicated facility free of those items. I’ll start by saying my kids are very used to their pancake mix and haven’t liked any other variety. They were at my parent’s house overnight recently and, as is customary for grandparents, my parents let them have as many as they wanted–but they only ate a couple because they tasted different. I was curious to see what the kids would think of this.
The package had a resealable zip lock to it in case you didn’t use up all of the mix. I can’t imagine anyone wanting to save half of their yummy mix though. When I first opened it I could tell there was something different about this mix. I breathed in and there was a definite hint of cinnamon. 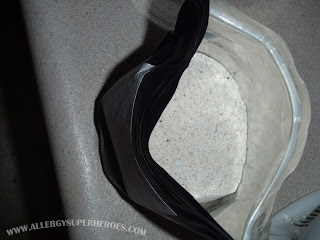 Mixing it up was simple enough, I only had to add oil and water. 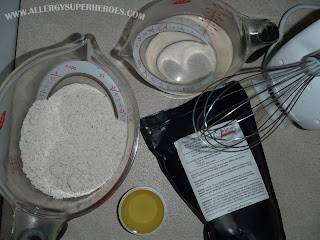 The mix was thick, very thick. The package noted that and said not to add any more liquid to thin it down. I was curious so I contacted them to ask why. “They are very thick… we are debating calling them breakfast cakes instead… It has to do with the chia instead of the eggs, and if you add more liquid it ends up very chewy. Has been a year long process looking for any alternative, but we ended up going with better taste and final consistency.” 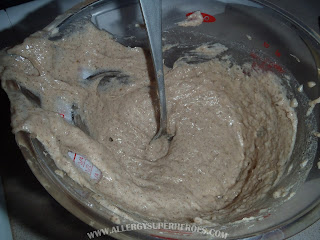 So however tempted you might be to add more liquid, DON’T DO IT! 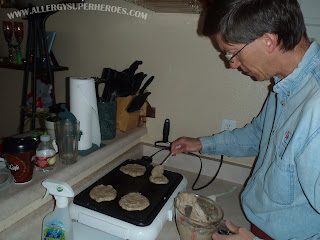 Our boys liked the smell of the mixture so I thought there was a good chance they would like the pancakes too. Our oldest correctly identified the cinnamon. I got ten pancakes out of it, just like the package said. I’ll usually get a lot more out of our usual batch (and the volume of batter was roughly the same as our usual pancakes), but again don’t add any more liquid to this. 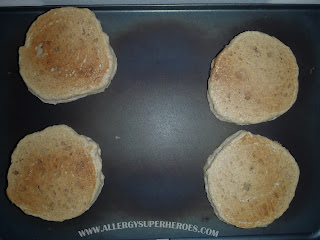 Now it was time for the taste test. We all tried a bite without anything on it. And the verdict was  . . .  we all liked it! The worst part was when our kids wanted more, they’re accustomed to getting a certain number of pancakes. This includes a larger; “Mickey Mouse” shaped one (which I was not going to try with such a thick mix). We had to explain that each pancake was like getting two, and that Mama and Dada wanted these as well. So they had to “settle” for some normal ones. I made a smaller batch of our usual pancakes, we have leftovers and it makes a quick breakfast for later in the week. It also gave a nice comparison of the two. 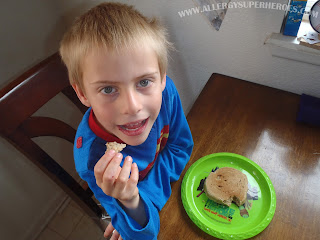 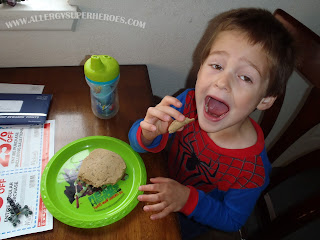 So even with our picky pancake eaters, they enjoyed this new variety. They are thicker, but they taste great which is really the most important thing. We highly recommend you give these a try! As an added bonus, Triann’s Pantry has let us offer a giveaway of their mixes so you can try them for yourself! The Perfect Pancake and Waffle Mix is $7.95 for a 15 oz package. 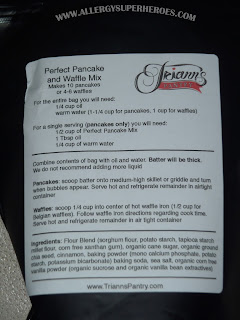 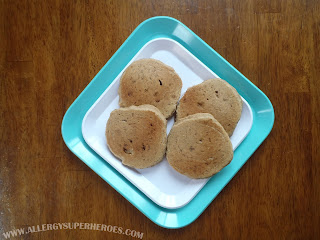 –   Very thick batter, may cause contention of how many each person gets

Until my next blog post, don’t forget how super you are!Now for the best part:

One lucky winner will receive three (3) Allergy Friendly Baking Mixes of their choice from Triann’s Pantry! (16.7oz size maximum per item.) Check out their store to see what you might want to win and enter with the Rafflecopter below! 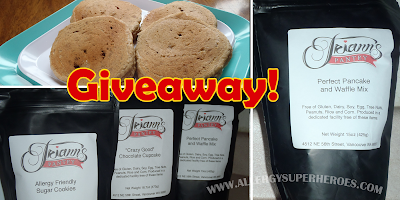 Winner will be announced no later than August 6th. Good luck!

Disclaimer: We received three baking mixes for free from Triann’s Pantry. We were not required to give a positive review and all opinions are our own. 🙂