In case you missed it, I did a guest blog post for Kids with Food Allergies on October 22nd. Follow this link to see the tasty recipe!

I thought I’d post a few behind-the-scenes pictures of that cake, in case anyone is interested in more details.

I didn’t put any ingredient pictures on my guest post, so if you’re wondering what brands I used, here they are: 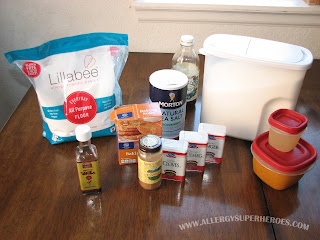 Lillabee Gluten Free Flour
Kroger Granulated Sugar (in the big bin)
Kroger Apple Cider Vinegar
Kroger Baking Soda
Morton Sea Salt
Mexican Vanilla
Mostly Kroger Spices (the Spice Islands Cinnamon was given to me by someone)
The Aquafaba is in the small rubbermaid bin, it’s from Kuner’s No Salt Added Garbanzo Beans
My Pumpkin Puree is in the larger rubbermaid bin. It’s homemade
Other successful flours included:
All-purpose wheat flour. If it doesn’t need to be gluten free, it works well with the regular stuff
Pamela’s All-Purpose Flour
Deby’s Gluten-Free Food All-Purpose Flour Blend
UNSUCCESSFUL flours included:
Bob’s Red Mill Gluten Free 1 to 1 Baking Flour
Kathy P’s Brown Rice Flour Mix
Bella Gluten-Free All Purpose Baking Mix – sort of worked, not perfect but not horrible
It’s funny taking pictures for a blog post, especially a guest blog post. I spent a good deal of time making my house look Martha Stewart-worthy, but only about six square feet of it. I thought it was funny to capture some of the kitchen mess and the random toys my son left on the floor near where I was working. (My house is actually much messier than you can see here, but there weren’t many good angles to capture the table and the mess.) 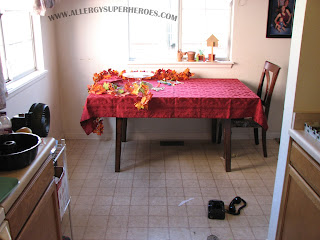 Here’s one of the bundt cakes fresh from the oven. You can really see the texture well in this photo. 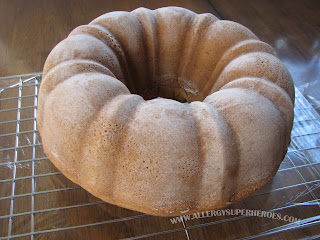 My frosting ingredients. I was trying to make this corn-free too, but I don’t know exactly where corn can hide, so it may still be in the Earth Balance or the Rice Dream. 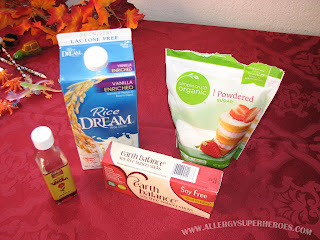 Teal food coloring. I got this tube at Hobby Lobby. (This does have corn in it.) I try to limit food dyes in most of our food, but when it comes to cakes they’re just too much fun. I’m sure you can get a pretty color that is close to teal using some of the natural food colorings that are starting to become available. 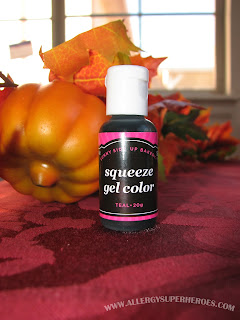 Quick! Get a picture of the cake before adding the frosting, just in case I totally screw it up! 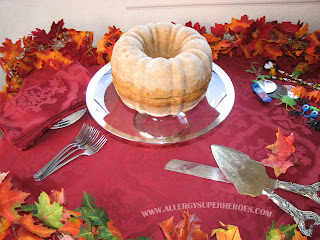 Partway through frosting it. In the back, you can see a spot where I screwed up the frosting and scraped it off before starting again. The final coat of frosting covered what was left of the aborted attempt. 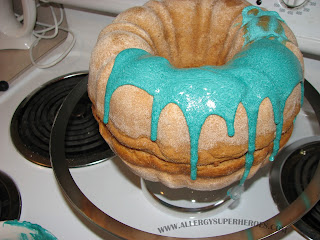 Me piping KFA’s Teal Pumpkin face on the cake 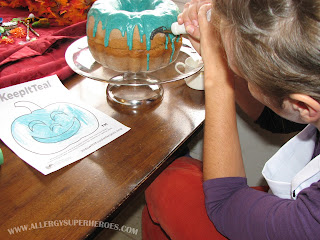 Kal watched me make this all day long–the day I finally did the decorating he was off from preschool. After being gently asked and sternly told to leave the kitchen several times, I couldn’t say “no” to a sweet picture with him in it! 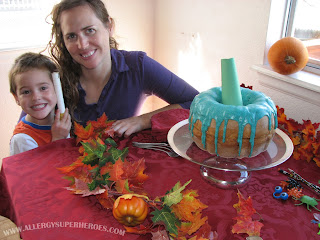