We found out about Zing Bars through a Freedible Twitter party. (If you don’t know about Freedible it’s a great community that focuses on custom eating and helps you find others with your dietary restrictions. It’s a great place for recipes and support! Visit their site here!)

Zing offered all of us a sample box of their bars. When our box arrived, we were surprised with how much swag came with it. Including the most unusual one–a box cutter! 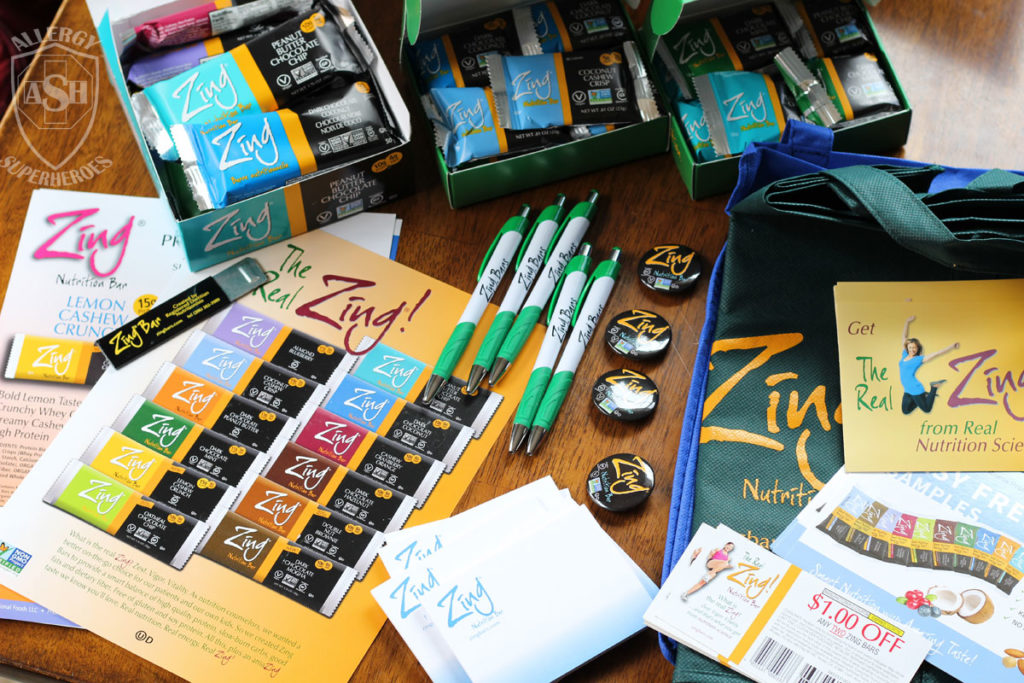 We got a sample pack of their bars which included all 12 varieties.

As you can see by the photo, these are a very dense bar. They reminded me a little of a PowerBar, but chewier/softer. 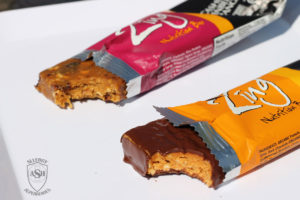 Regular bar and the ones with a dark chocolate coating.

Each bar is certified gluten-free. That seems to be their main focus for their bars since there are other allergens present.

The bars have a “Produced on equipment that also processes peanuts, tree nuts, milk, soy and egg” warning on them.

I spoke with their inside sales manager, Emily Tower about this:

‘We also include a “PRODUCED ON” statement on each of our bars, as a coverage from the slim possibility of cross-contamination. The ingredients listed on the “PRODUCED ON” are controlled using wash downs and good manufacturing practices, but listed on the package in the slim possibility of cross-contamination.

For my review, I listed each variety by what allergen it contains and any cross contact warning. I put on the flavors that I detected and my own personal thoughts on each one. With so many of them containing tree nuts, Eileen had no interest in trying any because of her tree nut allergy. There was also some weirdness with the allergen packaging statements.

In the first photo, only one of the mini-bars had a statement on it and it said “manufactured on” not “produced on.” Kind of strange that the verbiage wouldn’t be consistent on all of them. On the second photo, they all had the “produced on” statement, but a few of them also said “Traces of” for various allergens. It was these packaging discrepancies plus this being a company that we haven’t heard of before, is what led Eileen to decide against trying them. 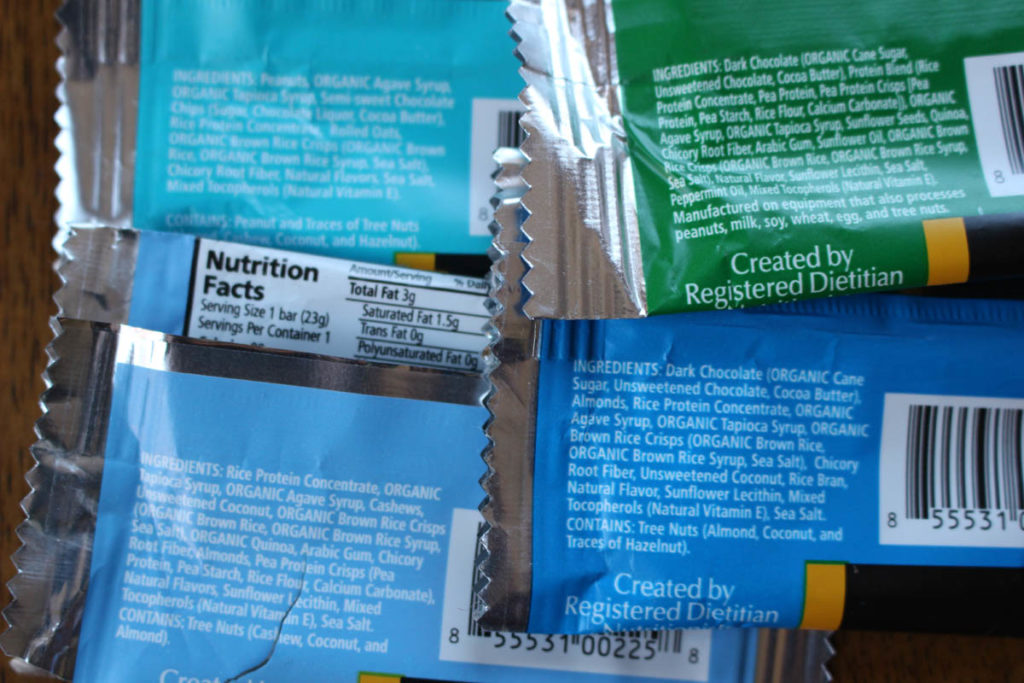 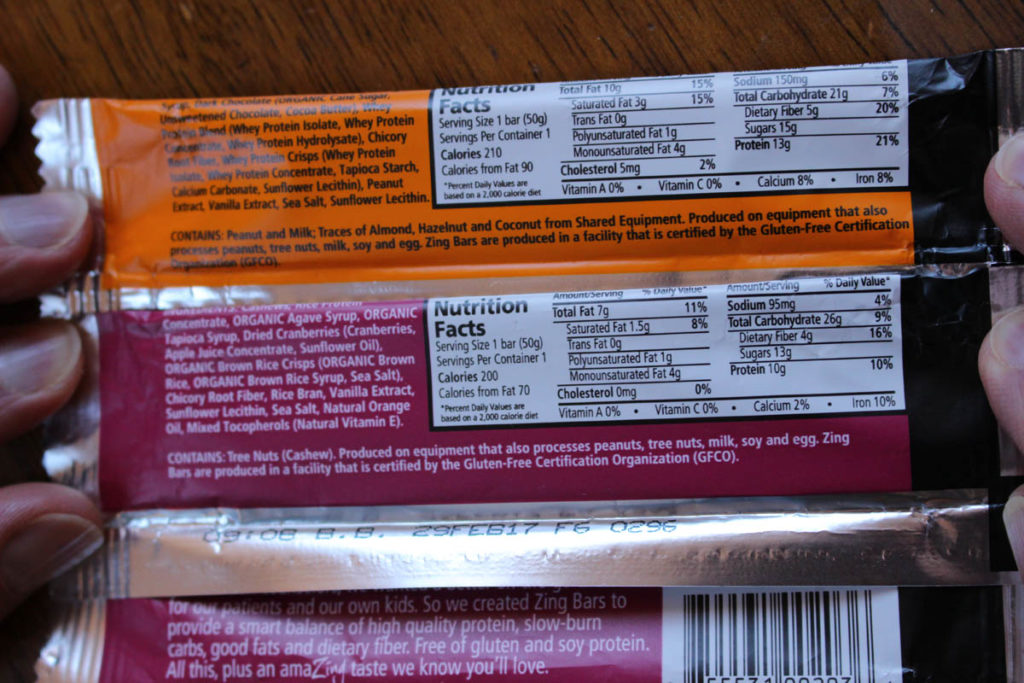 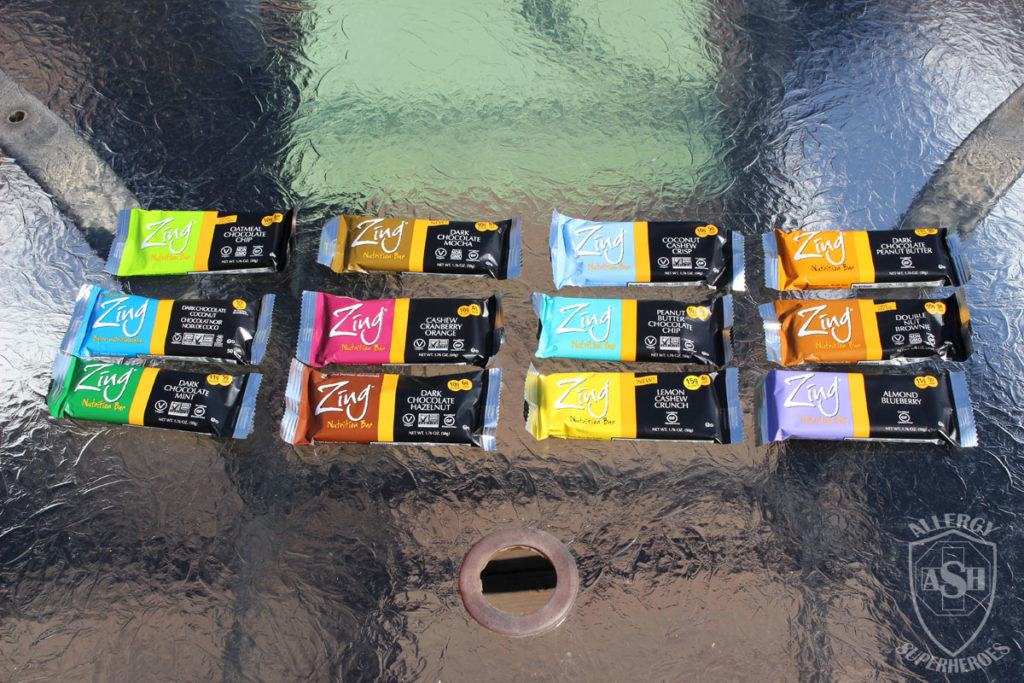 Strong peanut butter taste, light on the chocolate. It has chunks of something (peanut probably) which makes it crunchy.

Seems thicker, more dense than the other dark chocolate covered bars. Detect a hint of something – coffee flavor or something. Surprisingly, it was not one of my favorites since I love chocolate & peanut butter so much.

Contains Cashew. (This package didn’t have any “produced on” statement.)

Smelled like oatmeal as soon as I opened the package. It had a strong oatmeal taste, but not as much chocolate chip.

Contains almonds and coconut. Traces of hazelnut from shared equipment.

Hint of coconut, covered in dark chocolate. Tasted more chocolate than coconut, but this was soft and chewy. I liked it.

Contains milk and almonds. Traces of cashew and coconut from shared equipment.

Chewy with chunks of blueberry. I thought it was a little grainy and a bit weird.

Contains almond and hazelnut. Traces of cashew and coconut from shared equipment.

Very dense, chewy and nutty. It was okay.

Contains cashew, coconut, and almond. (This package didn’t have any “produced on” statement.)

I could smell the coconut as soon as I opened the package. I love coconut so this is a good thing! It also had a solid coconut taste to it and a light crunch. We got a few smaller sized bars of this one and I’m looking forward to gobbling these up.

A softer and chewier bar than the others, also covered in a layer of dark chocolate. I think all the dark chocolate ones might be like this. It was pretty good, good chocolate taste, definitely nutty.

Strong lemon smell and taste. The most dense so far and chewy. It reminded me the most like a Power Bar. Very lemony and spring-like, if you’re into lemon.

Very fruity. Strong orange flavor, chunks of cranberries. It reminds me of summer.

I could smell the mint as soon as I opened it. Very strong mint flavor, reminds me of those Andes Mints but in a bar form. It was good. If you like mint then this is the one for you!

I was a little apprehensive of this one since I’m not a coffee fan. It’s soft and chewy and coated in chocolate. It has a light coffee taste to it. It wasn’t strong so I didn’t mind it too much.

With twelve varieties there are certainly a lot of choices, so you would probably find one that you’d enjoy! I think this makes for another great option for those looking for a gluten-free nutrition/protein/breakfast bar. It comes down to your own personal feelings for any other food allergies present. I think overall they tasted good. They were sweet, but they have less sugar than other allergy friendly bars that I’ve had. Learn more about Zing Bars here.