The Allergy Superheroes themselves have finally graduated from the Academy of Heroes!  I’m thrilled to introduce them to you!

Jet Trail and Arctic Storm will be appearing on some great allergy gear, coming up very soon!

ARCTIC STORM
Arctic Storm is a wondrous young woman who has amazing ice powers.  She can freeze Villains in their tracks or build ice walls to keep them out.  She loves to ice skate, and gets around by making an ice path on the ground and skating along it on ice blades. 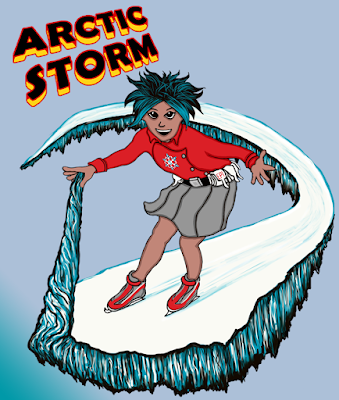 Arctic Storm happens to have food allergies.  She knows how isolating allergies can be, and so she focuses on anti-bullying.  She empowers kids with food allergies to remember that they are special and super, and that they don’t have to take bullying from anyone—not from kids, not from grown-ups, and not from the Food Allergy Villains!
HISTORY
Arctic Storm is the daughter of research scientists.  She has moved around a lot—mostly to places that are cold.  She doesn’t mind, however, because she loves outdoor winter activities.  She has always enjoyed sledding, snowshoeing, skiing, snowboarding, ice skating, and eating icicles.
Since she was often the new kid in school, Arctic Storm was quiet and shy, and not quite sure where fit in.  Unfortunately, school bullies exploited these traits and picked on her.  She usually stood her ground, but the bullying got worse when the bullies realized she had food allergies.  Arctic Storm again stood tall against their taunts, but worried that she wasn’t safe.
When Arctic Storm’s parents got jobs at a research station in Antarctica, she welcomed the chance to explore one of the world’s wild, untamed landscapes.  The isolation was a relief too—she was in her element in the snow and felt free to be herself.
Arctic Storm loved exploring—although she always obeyed her parents’ rules and kept the research station’s radio tower in sight.  While sledding one morning, she found a new fissure in the ice that was glowing green.  Upon closer inspection, she saw that the fissure went most of the way around a large shape buried under the ice.  She ran back to tell her parents about it, but not before snagging some green-tinted icicles to snack on.
Many scientists were interested in the green shape, but Arctic Storm was more concerned about herself.  After eating the green ice, she began to feel very strange.  She felt cold at first, and then unusually hot.  Her hands felt tingly, and she thought she could feel the movements in the ice and snow all around her.
Her mother tried to bring some hot tea, but Arctic Storm didn’t want anything hot.  She pushed the mug away, and to everyone’s surprise, the tea inside froze.  That was the moment when Arctic Storm realized she had ice powers.
Her body settled down after a few weeks, but the ice powers didn’t go away.  In fact, they got stronger.  Her parents took her back to the mainland, where she was quickly recruited by the Academy of Heroes.  There, she learned to master her powers.  She could freeze enemies in their tracks, she could build ice walls, and she could make a path of ice—and affix ice blades to her shoes—so that she could skate on her own ice.
Becoming a part of the Allergy Superheroes helped Arctic Storm grow as a person.  For the first time, she was an important part of an important group, and she loved having friends around her.  Now that she’s graduated from the Academy, she focuses on preventing kids with food allergies from getting bullied by anyone—peers, adults, or the Food Allergy Villains.

Jet Trail is an amazing boy who can move things with his mind using a power called Telekinesis.  This is a fantastic power for a Superhero, because he can move heavy objects and also keep Villains far away.  Jet Trail loves things that fly, so he discovered that he could use telekinesis on himself to make himself fly. 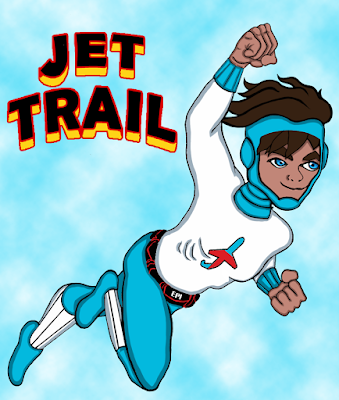 Jet Trail also happens to have food allergies, but he doesn’t allow those food allergies to define him or slow him down.  He uses his Superhero training to keep other people with food allergies safe by fighting off the Food Allergy Villains.  He wants to remind other allergic kids that having a food allergy doesn’t make them any less super!
HISTORY
To begin with, Jet Trail was just an ordinary boy who loved everything that could fly:  birds, planes, helicopters, hang gliders, kites, blimps, hot air balloons… even paper airplanes.  If it could hang in the air, Jet Trail loved it.  He spent hours watching planes take off and land at a nearby airstrip, and he was going to be a pilot when he grew up—just like his dad.
Nobody thought there was anything different about Jet Trail until one day at the age of four, when he tried to reach a container of cookies on top of the refrigerator.  He wasn’t tall enough to reach them, but when he stretched his hand up toward the enticing prize, the container came down to his hand magically.  Thrilled, Jet Trail dug in.
Unfortunately, this amazing new ability proved to Jet Trail’s family that they couldn’t keep allergenic foods in the house.  The cookies had been out of reach because they contained ingredients that Jet Trail was allergic to, but fortunately his mother witnessed the extraordinary event, stopped him from eating more than a few bites, and took care of his resulting allergic reaction right away.  Jet Trail learned three things that day:  1) to always check the safety of a food before eating it, 2) that Epinephrine saves lives and should always be kept nearby, and 3) that he had the ability to move things with his mind—a power called telekinesis.
Shortly after, officials from the Academy of Heroes recruited Jet Trail and helped him learn how to control his powers.  He could be an amazing force of good in the world, if only he would use his powers to help people.  That became Jet Trail’s goal in life—to become a Superhero and to help people.
Jet Trail became very good at using his telekinesis over the next few years.  As long as he could see an object, he could move it; although the closer he was, the more precise he would be.
Through all of his training, Jet Trail was still obsessed with flight.  So one day he told his instructors that he wanted to try levitating himself.  They set up plenty of padding on the ground and agreed to let Jet Trail try to fly.  To everyone’s surprise and delight, it worked!  It took Jet Trail more than a year to gain full control (because using his powers on other objects was much different than using them on himself) but he eventually became a master flyer.
Jet Trail was thrilled to combine his love of flying with becoming a Superhero.  He promises to do his best to protect your little heroes from the Food Allergy Villains!