It’s been a while, but I wanted to share the rest of the Allergy Superheroes villains here on the blog. With these four characters, our Rogue’s Gallery is complete! (For now.)
You can see the entire Rogue’s Gallery here! 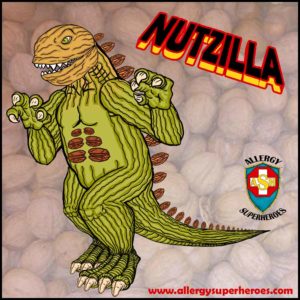 NUTZILLA
Nutzilla was created when a radioactive explosion caught a poor, helpless lizard in the middle of a nut farm. The resulting DNA-scrambling mutation grew at immense speed until she reached a height of 35 feet tall.

Nutzilla is still an animal, so her main goals are to survive. She primarily eats nuts, though she will settle for animals when nuts aren’t in season. She prefers to shelter underneath walnut or pecan trees when the weather gets bad. She generally remains in the country except when conditions force her to search for food elsewhere.

Already a menace due to her large size and ability to eat people in a single bite, Nutzilla is particularly dangerous to those with nut allergies because her scales are made of tree nuts. And because she scatters nut residue over an area the size of a football field when feeding. 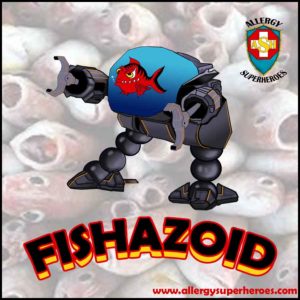 FISHAZOID
Fishazoid doesn’t know where his power came from. All he knows is that first he was content to swim with the school, but there was something fishy about that patch of murky water he swam through one day, and the ocean just didn’t seem big enough anymore.

The world above the water seemed ripe for the taking, so Fishazoid used his newfound brainpower to construct a Mecha-suit out of parts scavenged from sunken boats and submarines.

The world of land had bigger fish to fry than he’d anticipated, but he still wanted it all. Right at this moment he is making plans for world domination, encouraged by the fact that people with fish allergies, in particular, are intimidated by him. But the Allergy Superheroes have no intention of letting this freaky fish harm anyone with a fish allergy. Or take over the world. 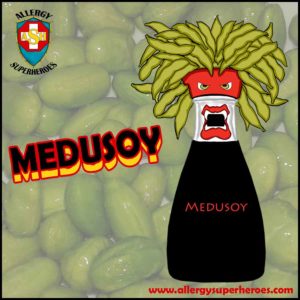 MEDUSOY
Medusoy is the fabled Medusa’s lesser-known little sister. One look at her can’t turn you into stone, but she has been known to paralyze soy-allergic victims with fear.

Medusoy has a severe case of stage fright, which has kept her out of the spotlight for centuries. However, the recent increase in soy allergies got her thinking that she could claim some of the glory usually attributed to her sister. However, Medusoy is too timid for a direct attack, preferring to lurk in unsuspecting corners in order to catch people by surprise. 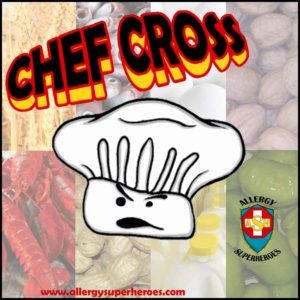 CHEF CROSS
There was once a magician who also worked a side job as a cook. He wanted his magic to pay his bills but it didn’t, so he was angry a lot. One day he decided to put magic into a black top hat. He tried spell after spell, but all the magic went into the chef hat the magician wore at his restaurant job.

He wore this newly-magical hat to work, where he spent the evening fuming about all of the “special requests” from the diners. He didn’t really believe that simply touching one food to another would hurt a customer with food allergies, and he resented all the extra steps he had to take every time an “allergy order” came in. Chef Cross, the hat who had just been magicked to life, quickly shared the magician’s anger about food allergies and longed to cross contaminate a plate, just to see what would happen.

The next day, the magician threw Chef Cross away–but being alive he set off on his own. Chef Cross learned, as he searched for another home, that he had a psychic power over anyone whose head he sat upon; particularly over the foods they ate or touched.

The Allergy Superheroes are constantly working to educate other about the dangers of cross contact, in order to counteract the influence of Chef Cross and others who don’t understand the dangers of food allergies.

So now you’ve seen them all! Which Food Allergy Villain is your Nemesis?