This is the theme of Food Allergy Month this year. The campaign encourages others to be respectful (not dismissive, impatient, or mean) when learning that someone has a food allergy–especially if it requires them to take added precautions. This is certainly a courtesy we want others to offer us in restaurants and when we’re sending our children to school, camps, and playdates.

But you know what? People without food allergies aren’t the only ones who need to React with Respect. If those of us who deal with food allergies on a daily basis, and who often feel affronted by the disrespectul responses of others, could remember to React with Respect when someone makes a stupid comment, we would get a lot more respect in return.

All too often, when people (especially people hiding behind their device screens) make ignorant comments about food allergies or Food Allergy Parents/Kids, we fall back upon our knee-jerk reactions to these attacks. The problem with our knee-jerk reactions is that they usually just fuel the fire, either reinforcing the other person’s perception of us or putting them on the defensive–which is a time when people don’t think compassionately, they just get ready to fight further.

If, however, we can distance ourselves from our roiling emotions to such attacks and respond calmly (and with the intent to inform), we make so much more progress!

For example, when I was browsing the #tealpumpkinproject hashtag last October, I came across a post of a teal pumpkin with the caption “Now we know which houses will have the lame candy.” The description also included the hashtag #KidsAreWimps

My gut reaction to seeing this post was the same as most other food allergy parents, which was to think “How DARE you call my kid a wimp for having food allergies and making fun of our awesome, inclusive movement you heartless @$*&**#!!” But I didn’t actually comment that–though several people already had.

Instead, I tried a different approach. I carefully wrote a lengthy reply, in which I told the poster that nobody chooses to have food allergies but that the number of allergic kids is rising dramatically, and that I hoped he realized he’s lucky not to have to live in fear of food. I pointed out that the Teal Pumpkin Project was not required of him, nor was anyone asking him to join, and that it is a great, inclusive gesture for those kids who can’t eat much (or any) of the traditional candy. I can’t remember all of my points because I failed to take a screenshot, but I know that I ended, in response to the #KidsAreWimps barb, that there is nothing wimpy about not wanting to die of asphyxiation on your own throat.

I expected, if anything, that he would probably continue being a troll or maybe delete the comments, but it was important to me that I try to appeal to his good side. It was with a little trepidation that I noticed a direct message from him the following day. I went ahead and opened it, and was glad that I had!

He apologized for being offensive and told me he’d taken the post and all of its comments down. He told me he had an infant son and his wife was pregnant with the next, and that they’d been lucky health-wise and he hoped they would continue to be so, but he knew that could all change in an instant. He apologized again and wished us well.

If I hadn’t taken the time to calm down and respectfully explain things to him, he might have remained a Food Allergy Internet Troll. Instead, he took down his offensive Instagram post and made quite a humble apology. I can’t know that he’ll never be a troll again, but I’d like to optimistically think that I made a positive impact and that he’ll refrain from poking fun at food allergies again. He’s certainly more aware now, and awareness is one of our main goals. I might even hope that he will tell his buddies to stop being dicks if one of them pokes fun at food allergies. I can dream. 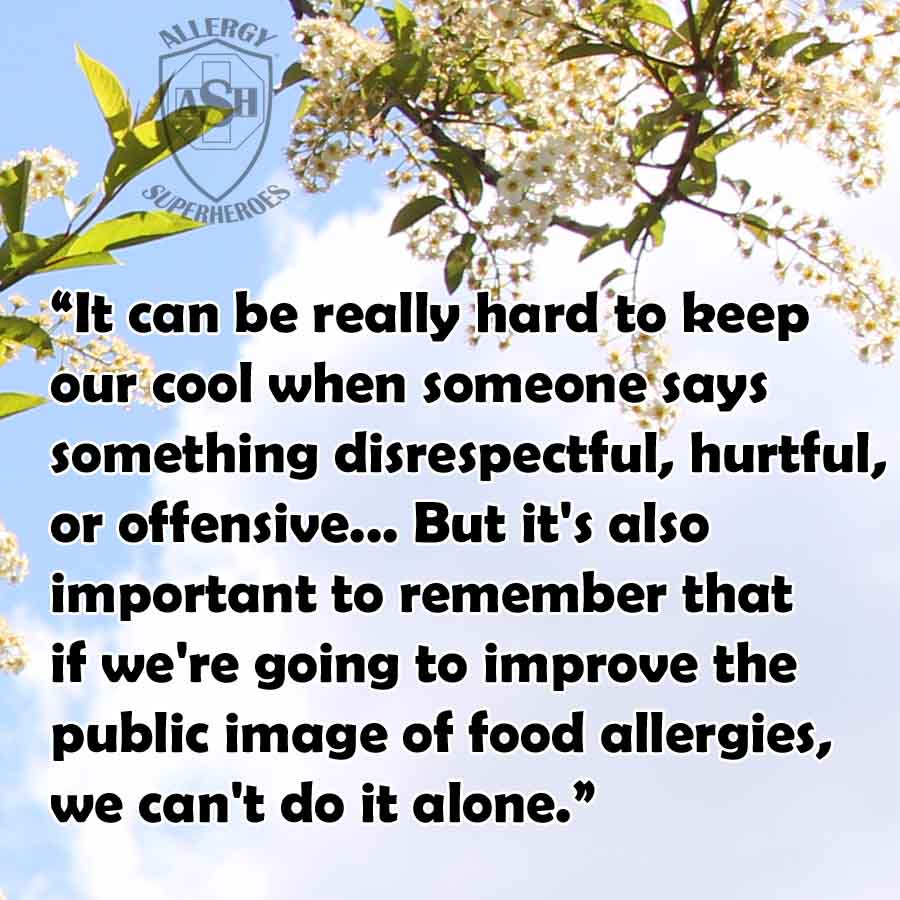 It can be really hard to keep our cool when someone says something disrespectful, hurtful, offensive, and even downright dangerous about us or our children. But it’s also important to remember that if we’re going to improve the public image of food allergies, we can’t do it alone. No matter how many of us there are in the food allergy community, we’re outnumbered by those without allergies and we need their support. Instead of reinforcing their stereotypical views of us, we need to turn them into allies!

So next time, instead of immediately hitting “send” when you’ve written a tirade to someone’s ignorant comment, take advantage of your own anonymity behind your screen and cool down for a minute. After you’re calm, read your reply again and ask yourself “will this help the person understand, or will it just attack them?” If it attacks back, try to rephrase it before replying. Try making “I” statements instead of “you” statements–they’re less intimidating to people. Or turn the other cheek and don’t reply at all.

We won’t win over everybody. I certainly haven’t. The internet is full of Trolls, and it always will be. But if we can show a united front of compassion and respect, we will win a whole lot more supporters than we will by saying “Fuck You and Your Peanuts.”

Resolutions for the Food Allergy Parent

One thought on “The Wrong Approach to Food Allergy Awareness”