A few weeks ago, I shared a link on our social media channels about a second Smart Case and App for carrying epinephrine autoinjectors–the case monitors temperature and other storage conditions, plus the app sends alerts if the person forgets to bring their life-saving medicine–or if they open it. The new app-and-case combo is called AnAPPhylaxis, and is being developed in Spain. (The first Smart Epinephrine Case that we’d ever heard of was the Veta Smart Case. We met the team behind it at FABlogCon!)

The press release regarding AnAPPhylaxis ended, as allergy articles often do, with a paragraph or two filled with allergy facts and statistics. What was interesting about the way this article ended was that the stats weren’t USA stats, but worldwide allergy stats. Here it is:

“Worldwide, it is estimated that 150 million individuals are considered to be at risk for experiencing anaphylaxis, with an alarmingly high mortality rate from the condition (One in 150). Over five million epinephrine autoinjectors are produced annually in the world, with 80 percent of the epinephrine autoinjector market based in the United States.” 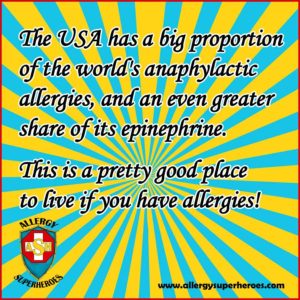 d several things fascinating about this paragraph, so I felt like examining them in further detail.

First off, I’d like to state that I have not verified these stats. I don’t know what source they came from, nor do I know if they are correct. However, I would like to believe that a biotech firm capable of funding a product like this would have fact-checked this sort of statistic before including it in their press release. Therefore, for the sake of this post, I am going to assume that these statistics are correct.

Individuals by the Numbers

“Worldwide, it is estimated that 150 million individuals are considered to be at risk for experiencing anaphylaxis…”

We regularly hear that 15 million Americans have food allergies. If our 15 million Food Allergic Americans are all at risk of anaphylaxis, and 150 million people worldwide are at risk of anaphylaxis, that would mean that 10% of all anaphylactic individuals live in the United States. By comparison, the United States has about 4.4% of the world’s population.

Now, that math may not be completely accurate. After all, people are anaphylactic to other things, such as insect stings, medications, latex, and even animals. That could bump the numbers up–although on the other hand, not all people with food allergies are considered at risk of anaphylaxis, despite all the time doctors spend telling us that a supposedly “mild” allergy could become anaphylactic at any time and without warning.

Mortality by the numbers

“…with an alarmingly high mortality rate from the condition (One in 150).”

This number shocked me. Again, I haven’t confirmed if it’s accurate, but it’s certainly not the case in the USA. I did some digging and the latest estimate says that approximately 200 people die from anaphylaxis each year, and the “good news” for food allergy sufferers is that the majority of those comes from drug reactions (58.8%), followed by “unspecified” (19.3%), venom (i.e. bee sting, etc, 15.2%), and food (6.7%). source

So looking at the number of anaphylactic individuals in the USA again, if we take the low estimate, then

If we take the generous estimate, then

Actually, these are very reassuring numbers. Perhaps those of us carrying our Epis everywhere can take a deep breath and relax a little, knowing that the odds are definitely in our favor–especially if we use those Epis!

But if the worldwide statistic is that 1 in 150 anaphylactic individuals will die of the condition, then that means that even more than 1 in 150 die in other countries to average our much smaller numbers in the USA.

Epinephrine by the Numbers

If 5 million Epis are made each year, and 80% of the market is in the USA, that’s 4 million Epis in the USA every year. That’s not even enough for every anaphylactic American to have one, even by the most conservative estimate. But let’s also remember that they don’t come individually–they always come in pairs. So that’s about 2 million epinephrine two-packs sold each year in the USA, and some of those go to people with known drug, latex, insect sting, and other allergies–not just food.

We also need to consider than many individuals get more than one two-pack of epinephrine. I get just one set for myself each year, but the boys each have a set at “home” and a set at school. So between the three allergic individuals in our household, we have 5 sets of Epis each year. And there are many self-proclaimed “Epi Hoarders” who have more than that: one set at school, one set in the child’s backpack, one set at home/in Mom’s purse, one set at Grandma’s…

When you take this into account, the number of anaphylactic individuals in the United States who carry epinephrine may approach 1.5 million or even 1 million. Which leaves a huge gap.

Certainly, nowhere near all of the 15 million Americans with food allergies are carrying epinephrine.

I’m sure Mylan and other pharmaceutical companies would be happy to fill this gap, but I’m guessing that many of these people are making a conscious choice not to Carry. And yet, our death toll is still pretty low compared to the rest of the world. This is probably somewhat due to the fact that even those who don’t Carry (or who experience their first reaction) have pretty fast access to epinephrine through an ambulance or their Emergency Room–and that epinephrine isn’t included in the 5 million autoinjectors statistic, because medical organizations carry it in vials.

So if there are between 135 and 145 million anaphylactic individuals in the rest of the world, and only 1 million autoinjectors to share between them, perhaps it’s no wonder that the average death toll is 1 in 150. The USA is a good place to live if you have food allergies, or other anaphylactic allergies. I feel certain that Canada and Europe account for most of the other 1 million Epis, and they probably also have similarly favorable numbers.

That makes it a bit disturbing to think about the allergic people in the rest of the world, and how their allergies must be handled. Perhaps someday we can spread greater awareness and more life-saving medication throughout the world.