We’re already well into the season.

You know the one. That season. The one in which, if you’re afflicted by hayfever, has you sniffling, sneezing, coughing, itching, has your eyes watering, and/or generally makes you feel like the outside world hates you.

I’m there too sometimes, don’t get me wrong. I’ve had somewhat of a reduction in symptoms in recent years (with no clear idea whether lifestyle changes have had any impact) and for that I am grateful, but there are still moments when it seems like the outside wants to kill me. Especially if I let my skin touch grass. Dang that grass!

However, unlike many of you, I am not taking a daily antihistamine to cope with the madness. 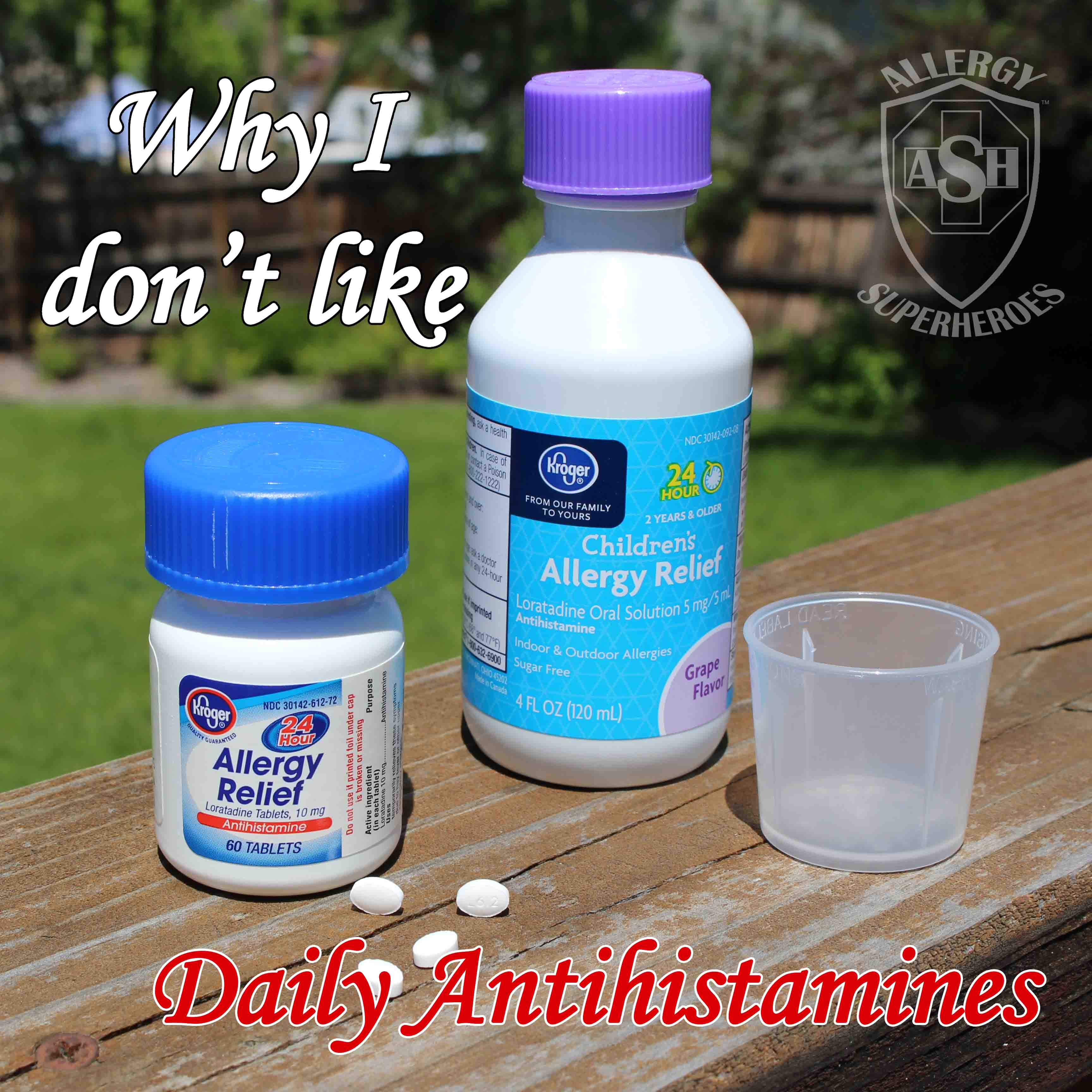 I haven’t taken a daily antihistamine daily in nearly five years. I do take them on occasion: for example, anytime we head to my inlaws’ house, I take one to stave off the cat. And if there’s a day where my environmental symptoms make me truly miserable and unable to function, I will take the drugs for a few days, but then taper it off to see if I can cope again.

Why would I do this to myself? The answer is simple:

I have food allergies.

What do food allergies have to do with it, you might ask? Well, let me tell you a (true) story.

Almost five years ago, about a month after the birth of my second child, my family and I went to the housewarming party of a friend. I’ll admit to not having been properly careful at that particular party. I checked all the labels that were available on the foods, but when it came to homemade items, I made assumptions about what would be safe based on what is usually safe, and what I never expected to find nuts in. I filled my plate with veggies, egg rolls, chicken wings, chips, etc. Then I sat down to eat.

A bite or two into my chicken wing, I felt the telltale tingling in my mouth that an allergic reaction was beginning. “Does this chicken wing have pesto sauce?” I asked myself. I sat for a moment, concentrating on the feelings in my body, and there was no denying that what I felt was an allergic reaction. I washed my hands to rid them of any residue, rinsed my mouth out for the same reason, and then went to get my purse (and my Benadryl.)

As I was opening my purse, my husband found me and said, “Don’t eat the egg rolls, they have walnuts!”

“I know that,” I replied. Kind of a dumb response, but as he said it, my reaction made perfect sense. Well, not quite perfect sense, but it connected the dots. It wasn’t a pesto chicken wing, it was a walnut-laced egg roll.

For the record, there was nothing crunchy in the egg roll I ate just before eating the chicken wing. That would have stopped me in my tracks. An unexpected crunch in a food usually brings on a sense of immediate dread, along with the thought “What did I just bite into and am I going to react to it?” But there was no crunch in my egg roll (it had actually been rather tasty, as I recall.) While my husband found a whole walnut in his, mine had simply mingled with walnuts before being spooned into the egg roll wrappers.

Which allergy folks know means it will cause a reaction just as quickly, but without the obvious warning.

I popped a pair of Benadryl and then asked myself a question most parents never have: “If I nurse my infant son while having an allergic reaction, am I going to pass anti-walnut antibodies on to him, giving him the allergy too?”

There was nobody I could ask that question of, and on top of that, it was time for infant Kal to EAT! We didn’t have any formula with us. So I nursed him at the party and consoled myself with the knowledge that the milk baby drinks while nursing was made by mom’s body in the hours prior to the feeding, not right at that moment. At least, that’s what I had read, and I was hoping it was true.

(I also made the decision to pump and dump for the next 24 hours, while letting hubby feed Kal formula. What I should have done was pump and freeze it, and then found a researcher interested in testing my unique breast milk in order to find an answer to that question. But I wasn’t involved in the online allergy community at the time, and it never occurred to me.)

The next several hours were pretty painful, even though the reaction didn’t start out bad. While I nursed Kal, the feelings in my mouth/throat went from minor to bad, and I started getting waves of cramping. The cramps weren’t in my abdomen though–they were in my back, in an area that tends to cramp up when stress or my posture gets to be too much. These cramps were pretty severe, and I found myself breathing through them just like I’d done through contractions scarcely a month before. After nursing I headed to the bathroom and saw that my skin had turned bright red everywhere that it was visible.

This should have been a straightforward case of “It’s time to Epi,” but I didn’t. I think it was partly holdover from my childhood when the prevailing wisdom was “use Benadryl and wait,” partly not wanting to spoil my friend’s party by openly showing her what had happened, and partly denial that it was that bad. I could breathe, so things were good, right? (p.s. Very bad decision!)

I Benadryled religiously for the next 24 hours, and by late the next morning I finally felt normal. But there were two things about that reaction that bothered me:

Number 2 was particularly troubling. You see, up until this point, at least from my teen years onward, my allergic reactions had been pretty much instantaneous. I could tell that a food contained nuts within seconds of putting it in my mouth (by feel, not by taste) so I generally didn’t swallow much of it. My husband called it my super sense. I’m not saying I wouldn’t have allergic reactions, but they were typically smaller than they could have been, if I’d eaten significant amounts of allergenic foods.

So why did this “super sense” fail me?

This question led me to make an appointment for myself with my son’s allergist, because for years I had just been getting my own EpiPens from my PCP and not thinking too hard about my allergies. But if they were changing on me, what did that mean?

I’d been taking Zyrtec daily at the time, and my suspicion was that the Zyrtec had raised my threshold ever so slightly, or had fought off or “masked” my initial symptoms. In either case, it was just enough for me to eat the whole egg roll and move on before feeling anything–in which case, it made the allergy more dangerous, not less, because it allowed me to eat a larger dose of allergen.

It wiped out my early warning system.

The allergist was not impressed by this theory. “You said you reacted within two minutes of eating it, how is that not fast?” “Umm, because it wasn’t instantaneous. That’s what I’m used to.” But she still seemed to think that the Zyrtec wouldn’t have had a noticable effect on my food allergy.

However, she offered no other theory. I still thought the Zyrtec was the reason I didn’t react fast enough, and I began avoiding daily antihistamines when I could tolerate doing so. That’s when I discovered that my seasonal allergies are not constant all season long; they ebb and flow with the different months and pollen levels.

Last year though, I finally got validation of my theory. Well, not exactly validation, but agreement from several members of the medical community. The first occurred when Zax was in a food allergy study, and after feeding him successive doses of egg until he began to have a reaction, they offered him a meltaway Zyrtec to treat it. When I pressed for information, they said that it hasn’t been rigorously tested, but that a fast-acting Zyrtec (and possibly Allegra) was about as effective at treating minor reactions as Benadryl, but without the side-effect of getting drowsy.

So if a Zyrtec could clear up my son’s symptoms, could taking one daily delay a reaction? The doctor from that study seemed to think it was plausible.

Zax is in another, ongoing food allergy study, and I’ve mentioned this story to several nurses. I’ve told them that it’s the reason I don’t give my kids daily antihistamines unless I have to, and they’ve all agreed that it is a risk.

However, I believe that daily antihistamines make food allergies more dangerous. I’d rather put up with itching and sneezing than have an antihistamine mask another anaphylactic reaction.

It’s as simple as that.

It Matters Who You Ask