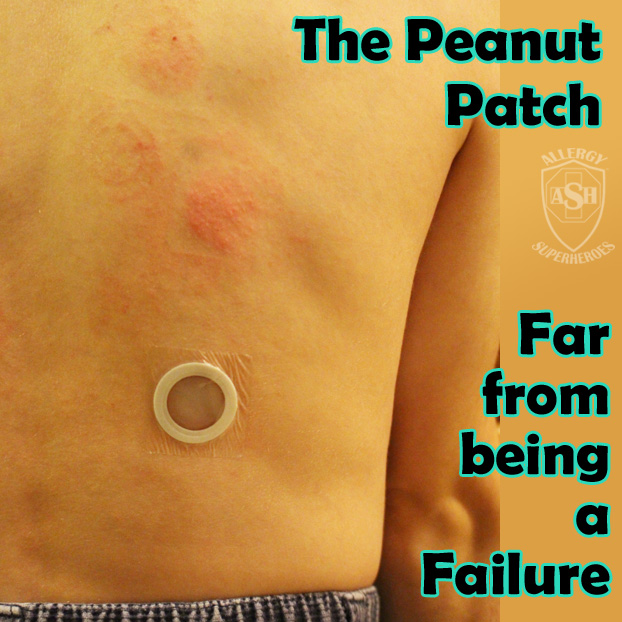 You may have recently seen disturbing headlines regarding the Peanut Patch treatments, or read an article that said it failed. Many are worried that this is the end of the Peanut Patch–that it will never make it out of clinical trials, much less into your local allergist’s office, and a lot of people have expressed sadness and disappointment in online discussions.

If this is how you’re feeling, please relax. Nothing has failed.

The Peanut Patch is a new, experimental treatment for peanut allergies, made by DBV Technologies. Allergic patients wear a patch on the skin, which contains a small amount of peanut protein. The patient’s sweat dissolves the proteins and carries it into the skin and to they lymph system, bypassing the bloodstream. Patches are changed daily and are rotated through multiple spots on the skin, in order to always be placed on unbroken skin. Over time this process, called Epicutaneous Immunotherapy, has shown promising signs that it will desensitize most patients to their allergens. Localized skin reactions are common, but the risk of more serious reactions is extremely low.

This isn’t a “cure” or a “vaccine”–patients are still allergic, but the amount of allergen it takes to cause a reaction will go up, making the world a much safer place. The peanut patch is still in clinical trials and is being evaluated–though it has received both “fast track” and “breakthrough” status by the FDA. DBV is also developing milk and egg patches, with the hope that more will follow.

The recent media (and stock market) hoopla came because DBV recently released data from the first year of one of their research studies. Some of that data is not what they expected–and unfortunately, it is being misrepresented and sensationalized by the media.

Is anybody really surprised to see the mainstream media report incomplete or even downright incorrect information on food allergies? I’m not. After all, how many times have we in the food allergy community fended off people asking us “when are you going to get your kid cured already??” after a study for a promising therapy makes headlines like “Peanut Allergy Cure is Here!” We have to tell everybody to calm down because one study doesn’t mean something is widely available (not to mention is far from being a “cure.”)

This is no different. It just went in the other direction. Here’s what really happened:

DBV Technologies just released the topline data from the first year of the PEPITES Viaskin Peanut Patch study. During that year, PEPITES had 356 total patients: 238 on the active patch and 118 on placebo. All patients underwent food challenges (where they ate increasing doses of peanut in order to see at what point they would react) at the beginning of the study (their “baseline” challenge) and at the end of one year of treatment.

As you can see, this still leaves plenty of room for improvement even for patients who didn’t meet the criteria for “responder.” While some may not have responded at all to the active patch, the bulk of the remaining 65% likely had smaller improvements. In addition, this only accounts for the dose at which they reacted–some likely reacted too soon to be called a responder, but they may have had a less severe reaction this time around (only needing antihistamine vs. needing epi the first time, or only needing 1 epi where they needed 2 the first time.)

For the placebo participants, 13.6% increased their tolerance enough to be considered a responder. This was higher than expected–DBV had predicted less than 10%. This is really where the problem arose–there’s something called the “confidence interval” which is a comparison of these groups to the entire study population. I don’t know how the math is calculated, but they were expecting a confidence interval of 15%, and it came in at 12.4%. This is largely because of the high placebo rate, and this is the study endpoint that they failed to meet. Their active responder rate was similar to previous trials.

Specifically, on average, active participants reacted by 210mg at their baseline challenge and at 900mg at their one-year challenge. Placebo patients reacted by 213mg at baseline and at 361mg at the one-year challenge–and the ones who became “responders” likely accounted for most of that increase. DBV does not know why so many placebo participants became responders. My guess is that some of them outgrew their peanut allergy naturally during the study.

Also bear in mind that this is only after the first year. Previous trials have shown dramatic increases after two or more years on active treatment, and this trial did not (and was never meant to) stop at one year. Eligible PEPITES participants were given the option to roll into the extension phase of the trial, called PEOPLE. Everyone in PEOPLE got rolled into the active patch, regardless of whether they were placebo or active to begin with. 93% of PEPITES patients have enrolled in PEOPLE. Because of this, there will be no further comparison between active and placebo groups in this study, since nobody is placebo anymore.

Please note that DBV had this data for less than 24 hours before they released it. It’s raw data and they themselves have had little time to analyze.

DBV HAS HAD POSITIVE CONVERSATIONS WITH THE FDA AND WILL CONTINUE WITH ALL TRIALS AS PLANNED. THIS IS NOT STOPPING THEM. BOTH DBV AND THE FDA AGREE THERE IS A PATH FORWARD TOWARD FDA APPROVAL. I’ve also heard through the grapevine that phase II patch trials had similar initial results. Public awareness and understanding swings like a pendulum.

THE GLOOM AND DOOM HEADLINES ARE REACTIONARY, WRITTEN TO ELICIT STRONG EMOTIONAL RESPONSES. This is usually the case with most news. It’s certainly the case when food allergies reach the news. Exciting headlines result in clicks and eyes on the article.

Unfortunately, many of these news articles took this data and ran the wrong way with it. I saw one claim that the study didn’t achieve more tolerance with patch than with placebo–which is false. The difference between groups was smaller than expected, but active definitely achieved mroe tolerance than placebo. Another article said the peanut “vaccine” failed–the patch isn’t a vaccine, and this demonstrates how little journalists sometimes try to understand the things they’re asked to write about. Again, think of the times that the general public suddenly thinks there’s a food allergy cure because one promising study releases results. It is a shame that the headlines and news snippets have resulted in a dramatic drop in DBV’s stocks, though.

I haven’t blogged about it yet, but we enrolled our son in Viaskin REALISE back in March. We haven’t received any notifications that the trial is over, nor do we expect to. And we will happily keep him in there! 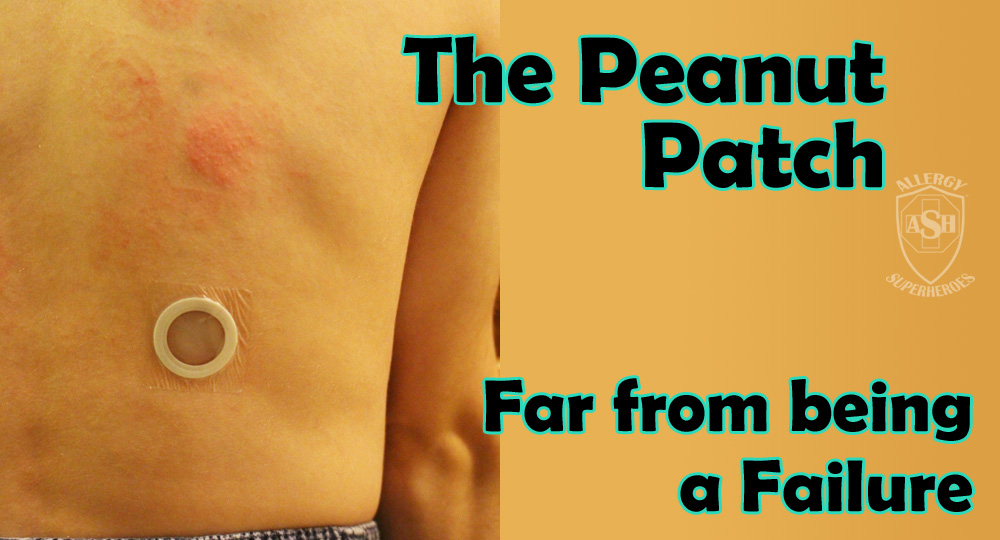 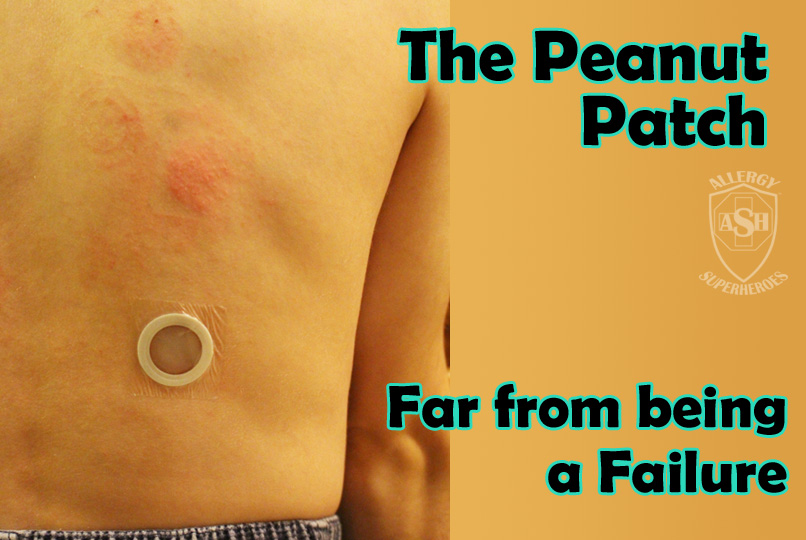