In case you weren’t aware, Saturday was the Ultimate Pi Day! 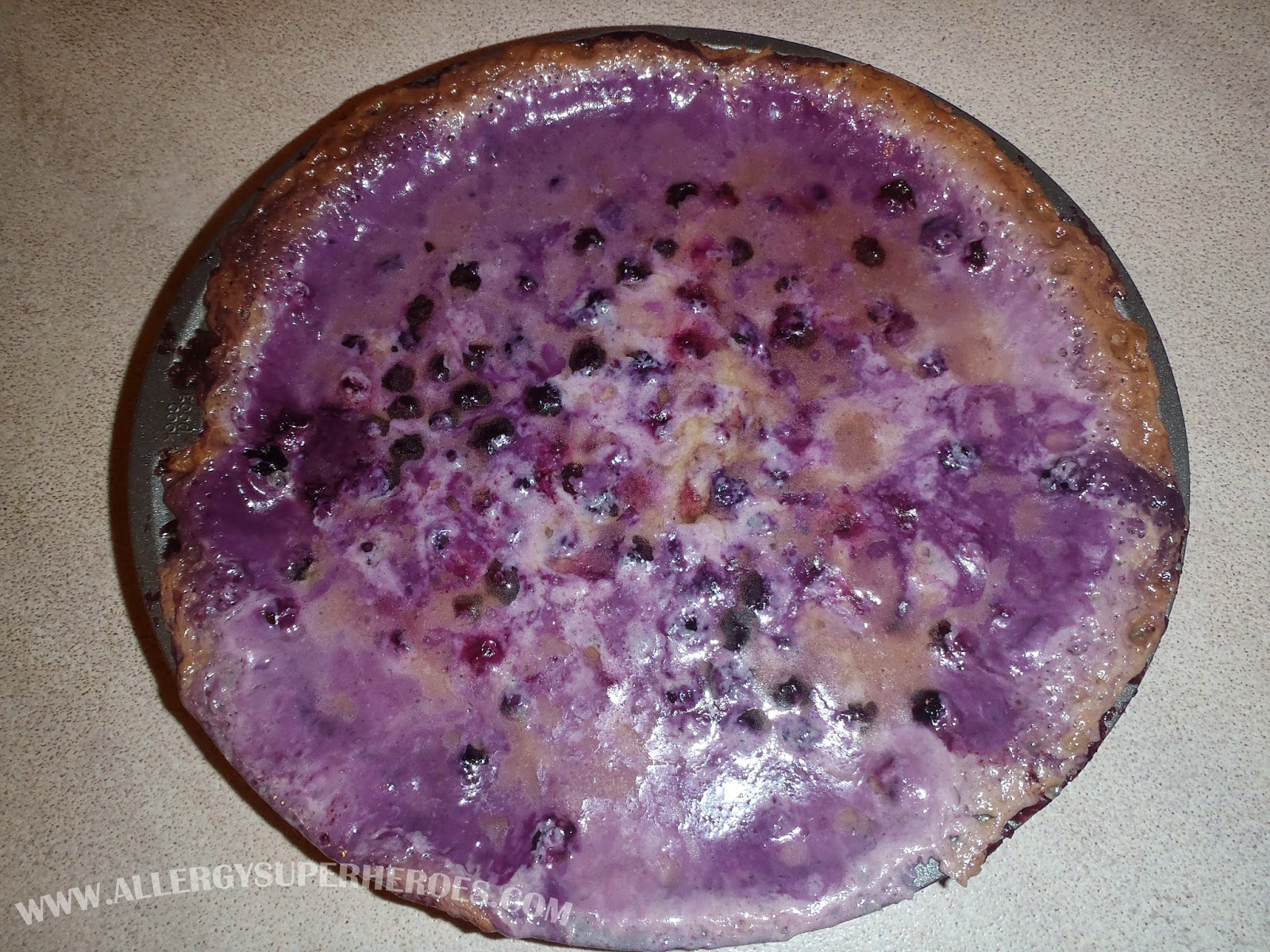 We were going out on a limb on this one. We have a couple of recipes for cheesecake pies, and we have a ton of frozen blueberries. That part was easy enough to figure. But then we found out about the contest from So Delicious. For every photo of an allergy-friendly pie uploaded to Instagram this past weekend with the tag #Pi4All, they will donate $3.14 to the Kids with Food Allergies Foundation. They will also give one lucky winner $314.

So we decided, “heck, let’s take our already-peanut-tree-nut-and-egg-free pie and make it even more allergy friendly.” So we went out and purchased Earth Balance “butter,” Daiya “cream cheese,” and Enjoy Life Sugar Cookies to crumble into a homemade crust. Which meant that our pie, which was already going to be an experiment, turned into quite a big experiment because we’ve never baked with dairy substitutes before (nor done much gluten free, either.) 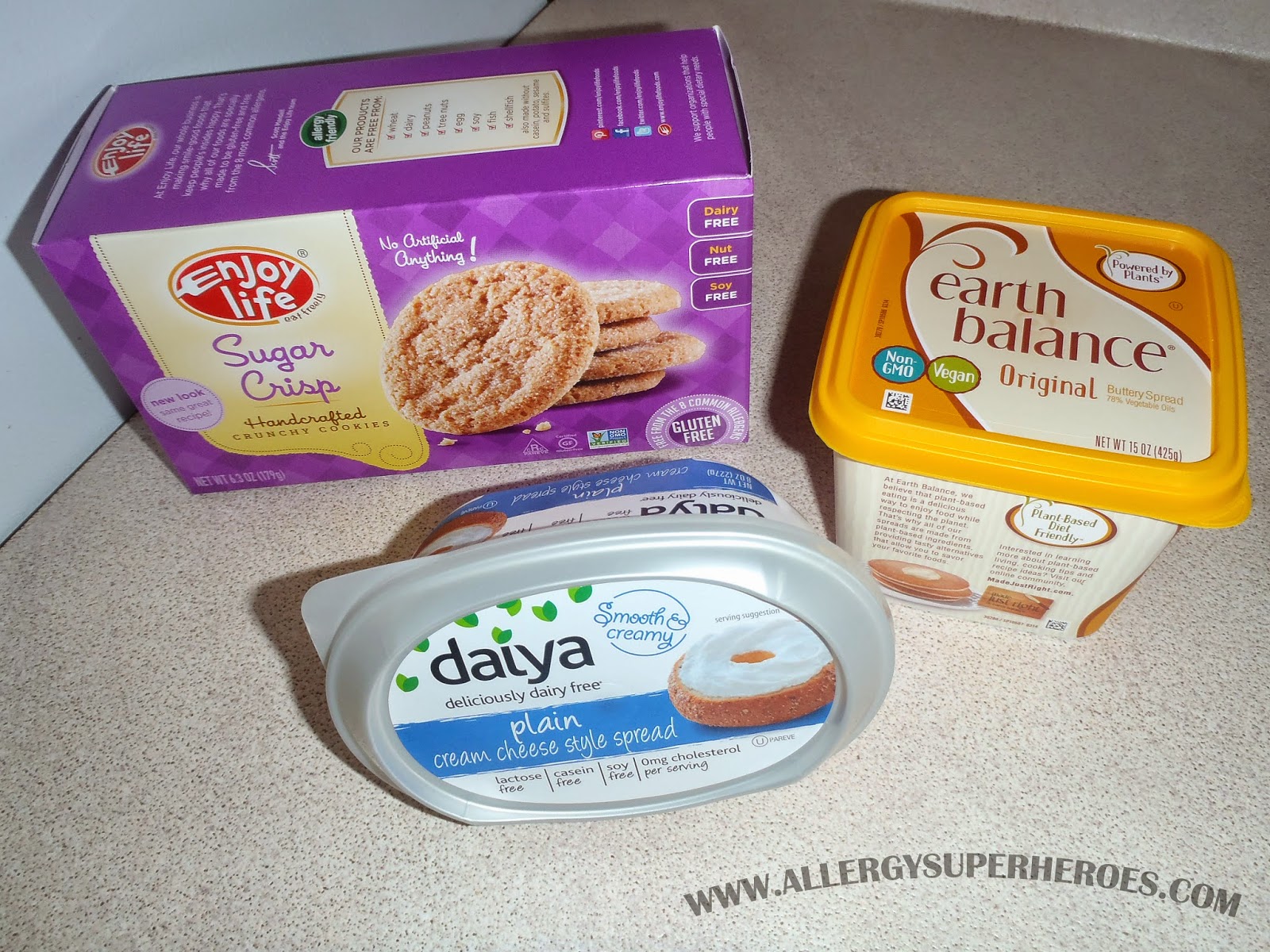 The pre-baked pie is very pretty. The baked pie turned into something of a disaster. It still tasted good, but it certainly won’t win any beauty contests.

I don’t know whether this pie is fit to replicate, but I’m including the recipe for what I did anyway. There are a lot of tweaks I will make before trying it again, and I’ll mention them as we go along, so that if you decide to try making our pie, you might have a leg up on making it just a little better.

The following recipe was free of the big 8 except for soy. If I’d known at the time that I’d need “butter,” I would have purchased the soy-free Earth Balance sticks while I had them in front of me. I didn’t know, though, and didn’t feel like going all the way across town to get them, so I stuck with regular Earth Balance spread, which has soy. 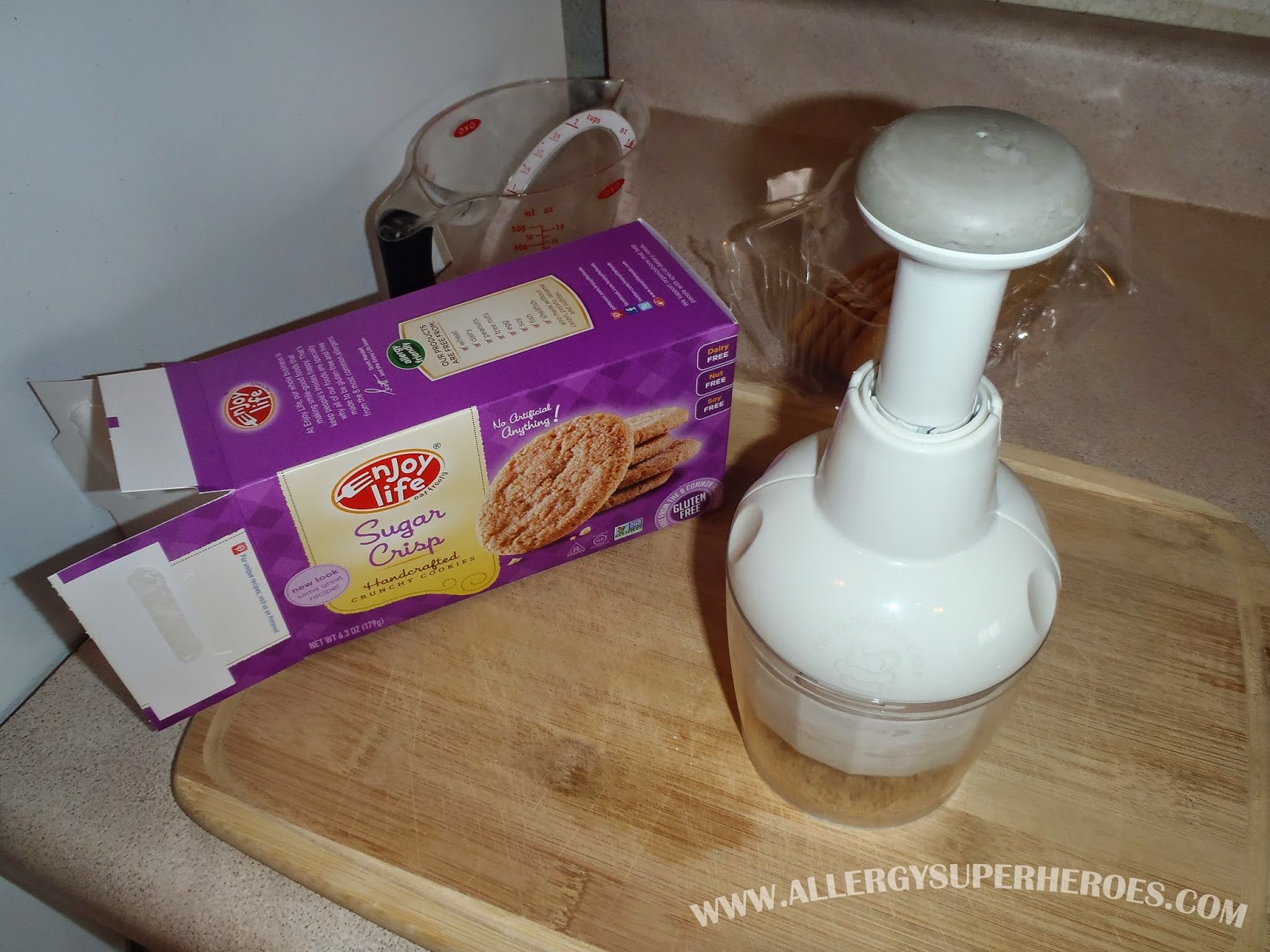 Crush or chop the sugar cookies in a food processor, a closed plastic bag with a rolling pin, or a pampered chef chopper until you have fine crumbs. 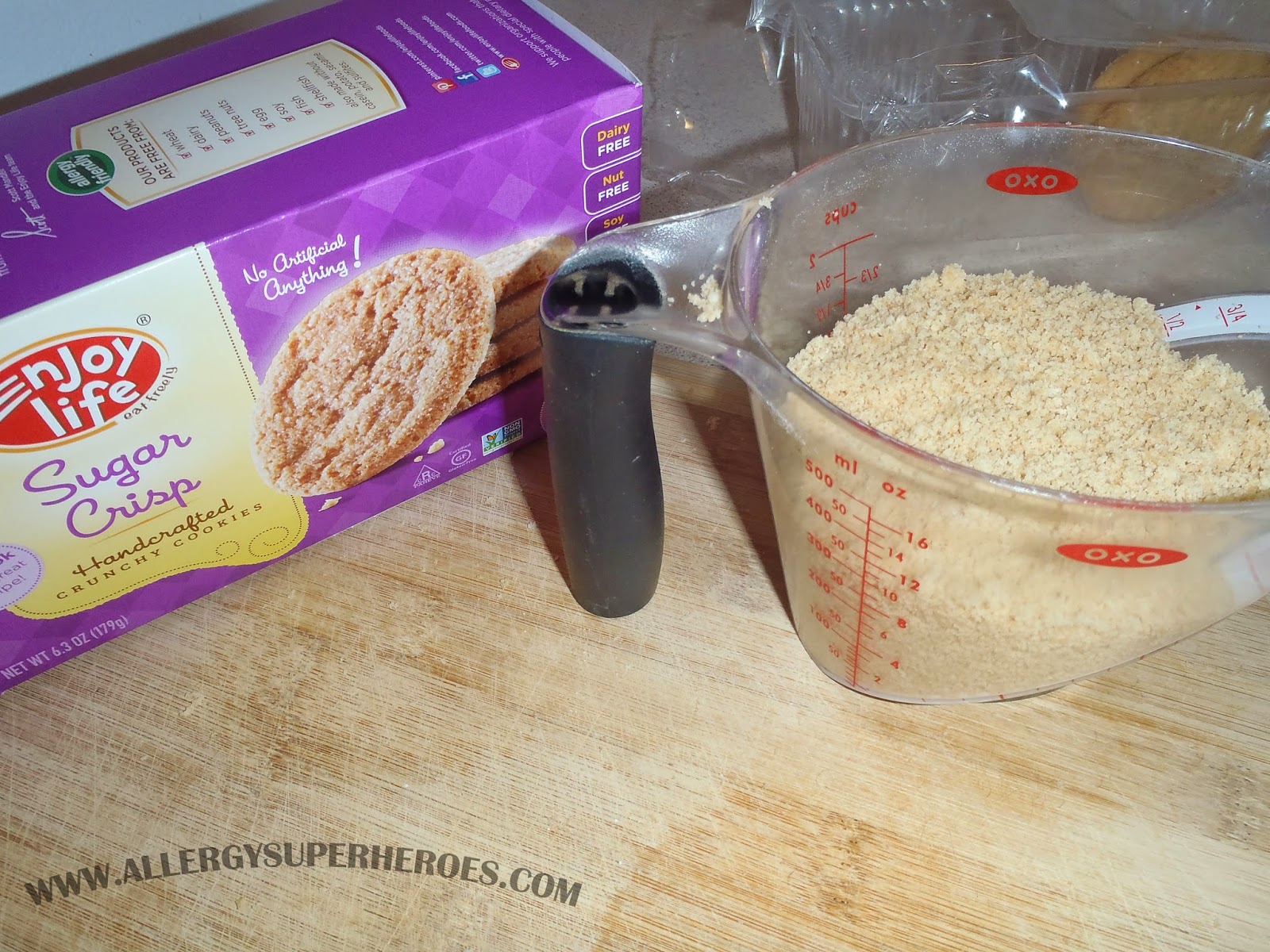 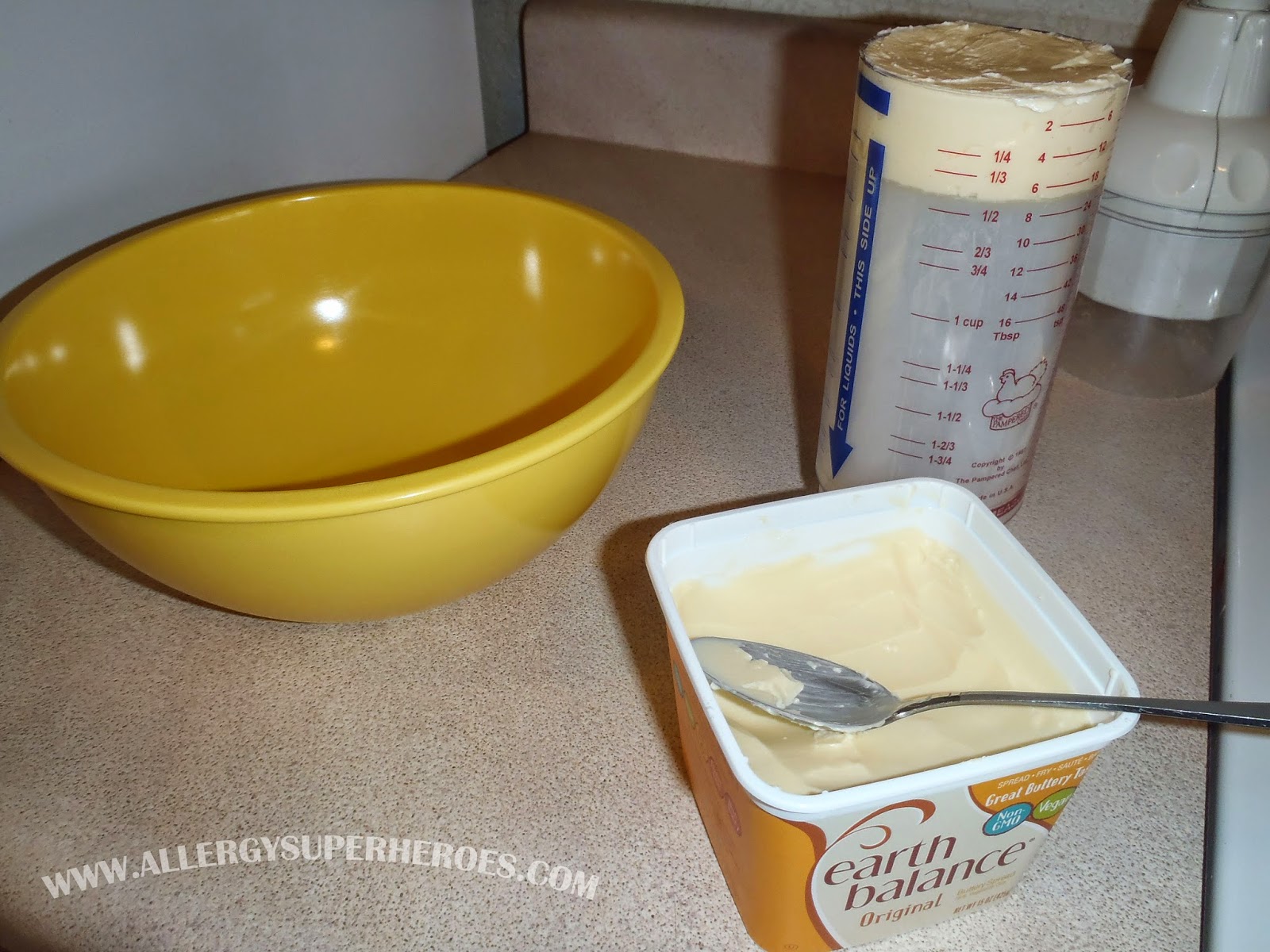 Melt your Earth Balance on the stove or in the microwave. 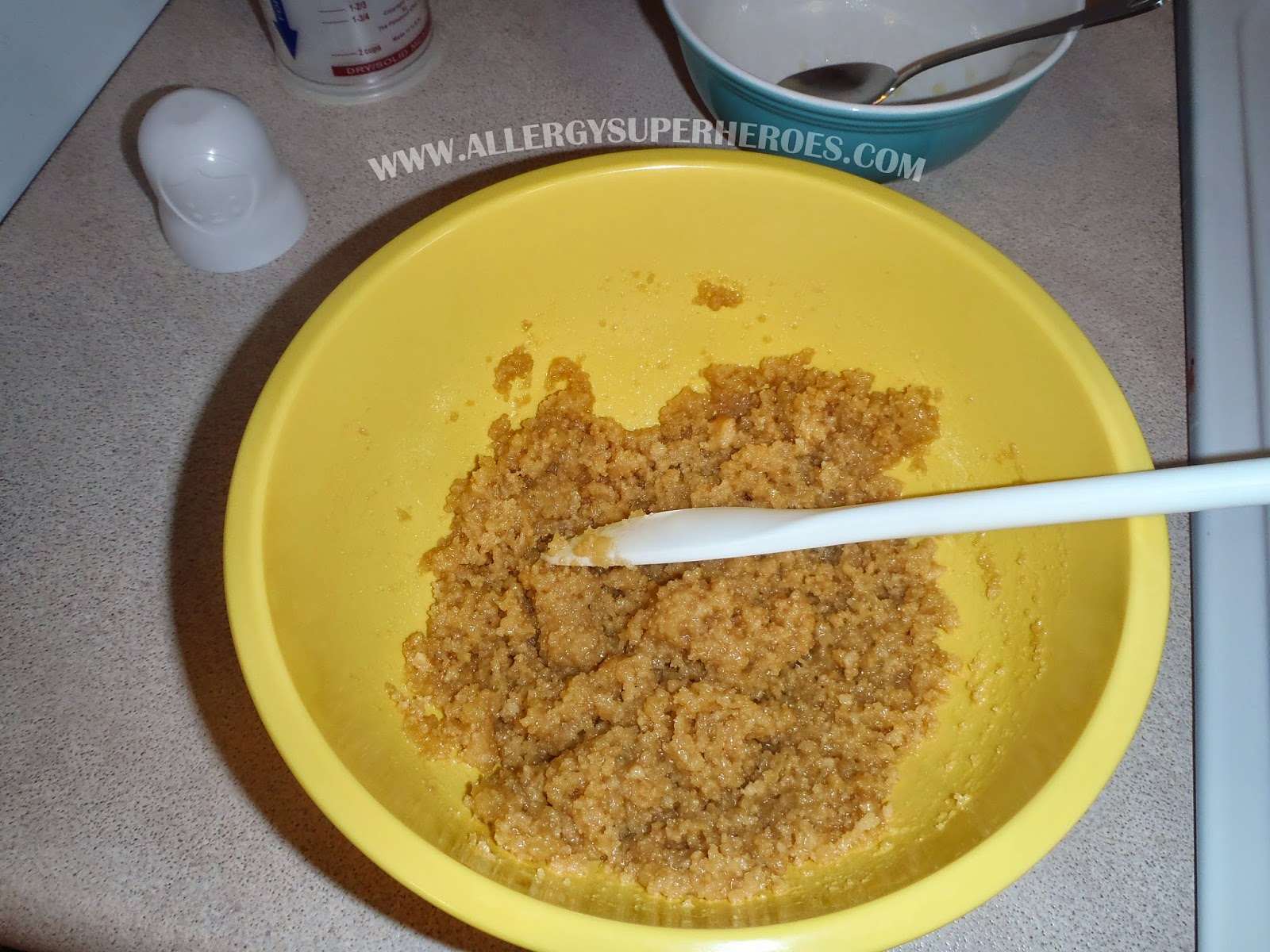 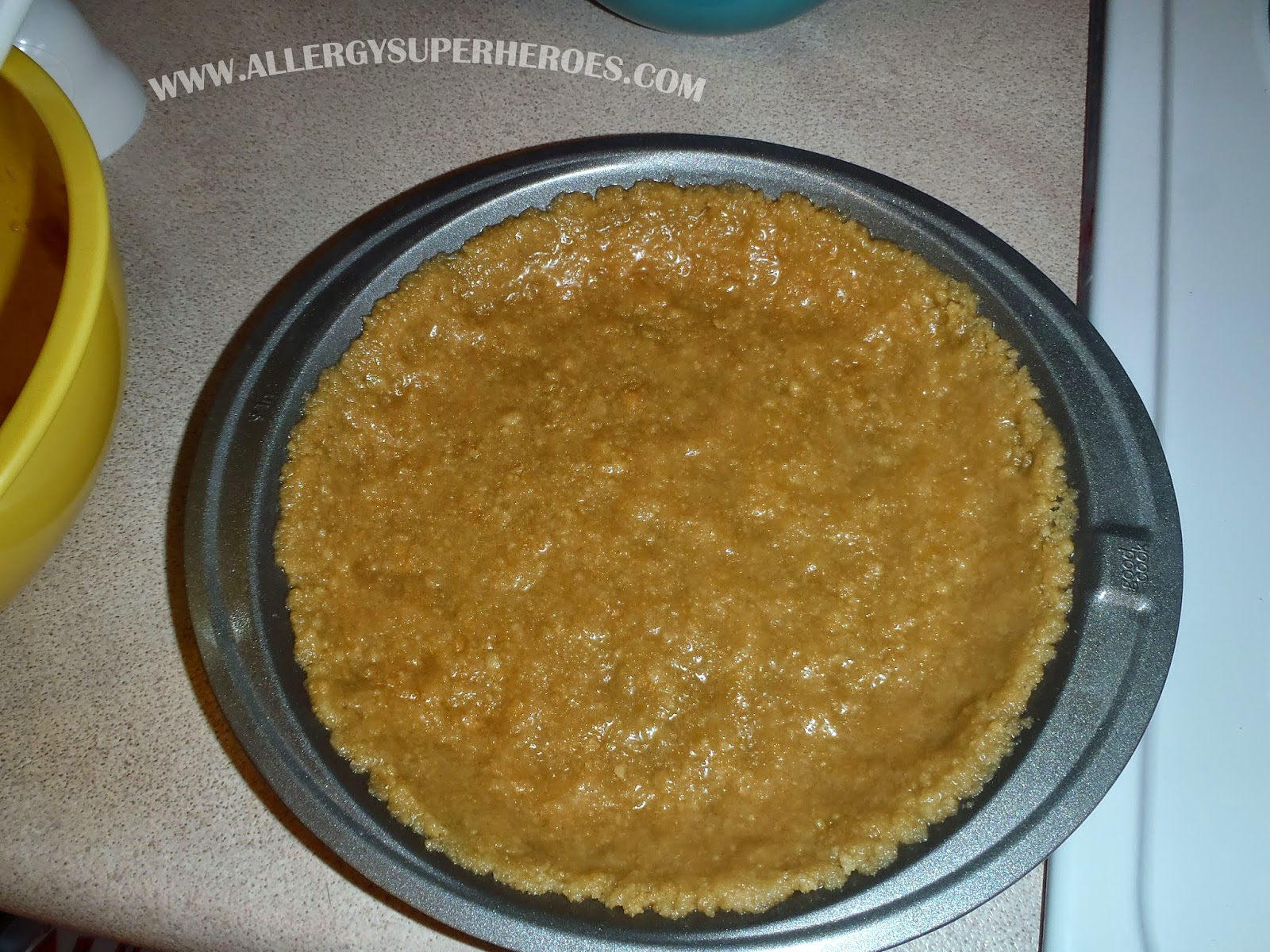 Press mixture into a pie plate.
Bake at 375 degrees for 7 minutes. 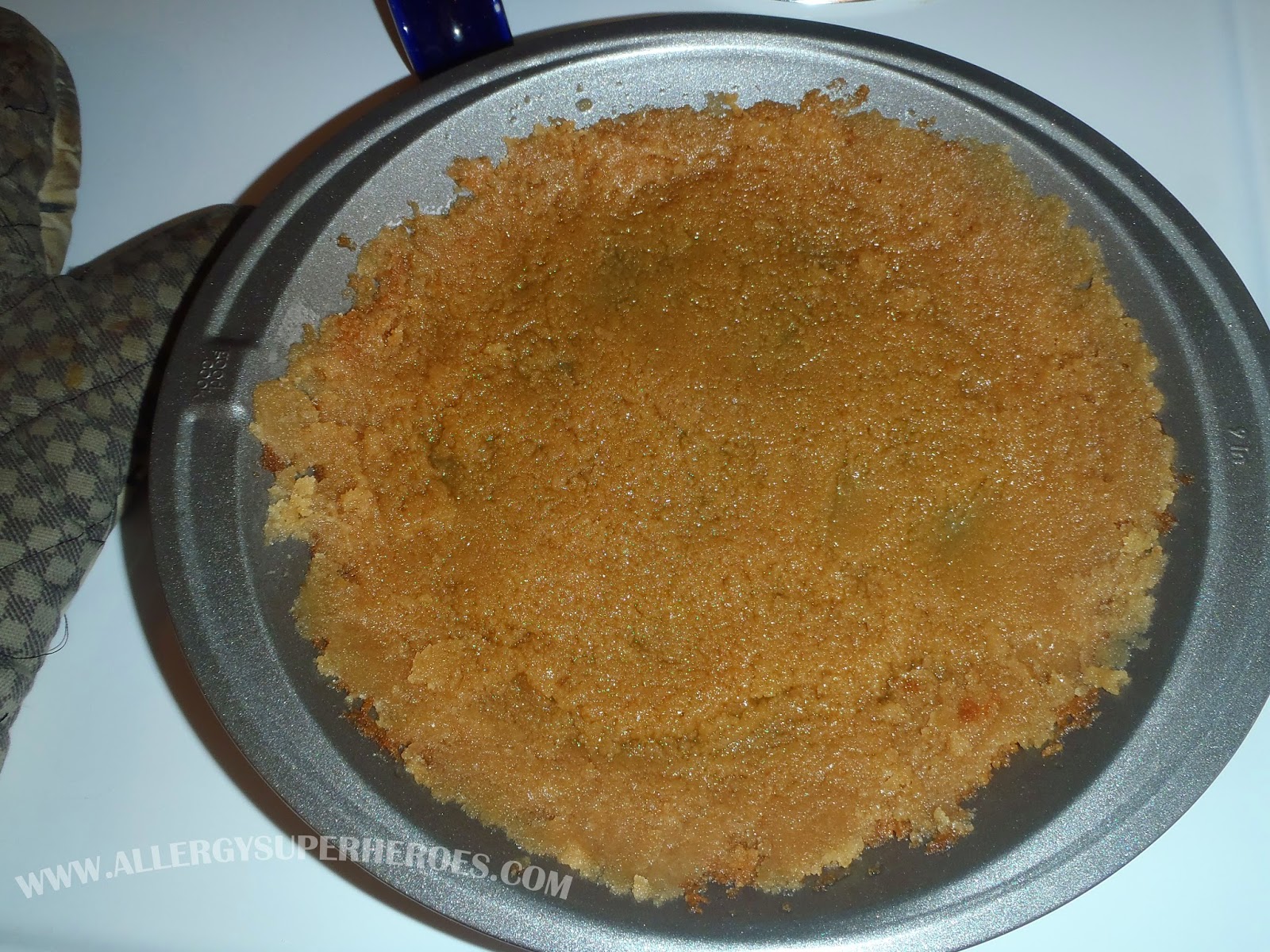 7 Tbsp of Earth Balance was probably too much for this, it was pretty wet. And after baking, it had all slid down the sides of the pan to the bottom, and was VERY greasy. I used a spoon to lift the crust up the sides of the pan again and press it into place, which I was only able to do when it was still greasy and fresh out of the oven. It set up after a few minutes at room temperature. After I finished reshaping it, I took a paper towel and sopped up some of the extra grease that was pooling on the top. If I were to repeat this, I would use 6 or even 5 Tbsp of Earth Balance. I might still have to reshape it fresh out of the oven, though.
Blueberry “Cheese”cake Pie Filling
Ingredients 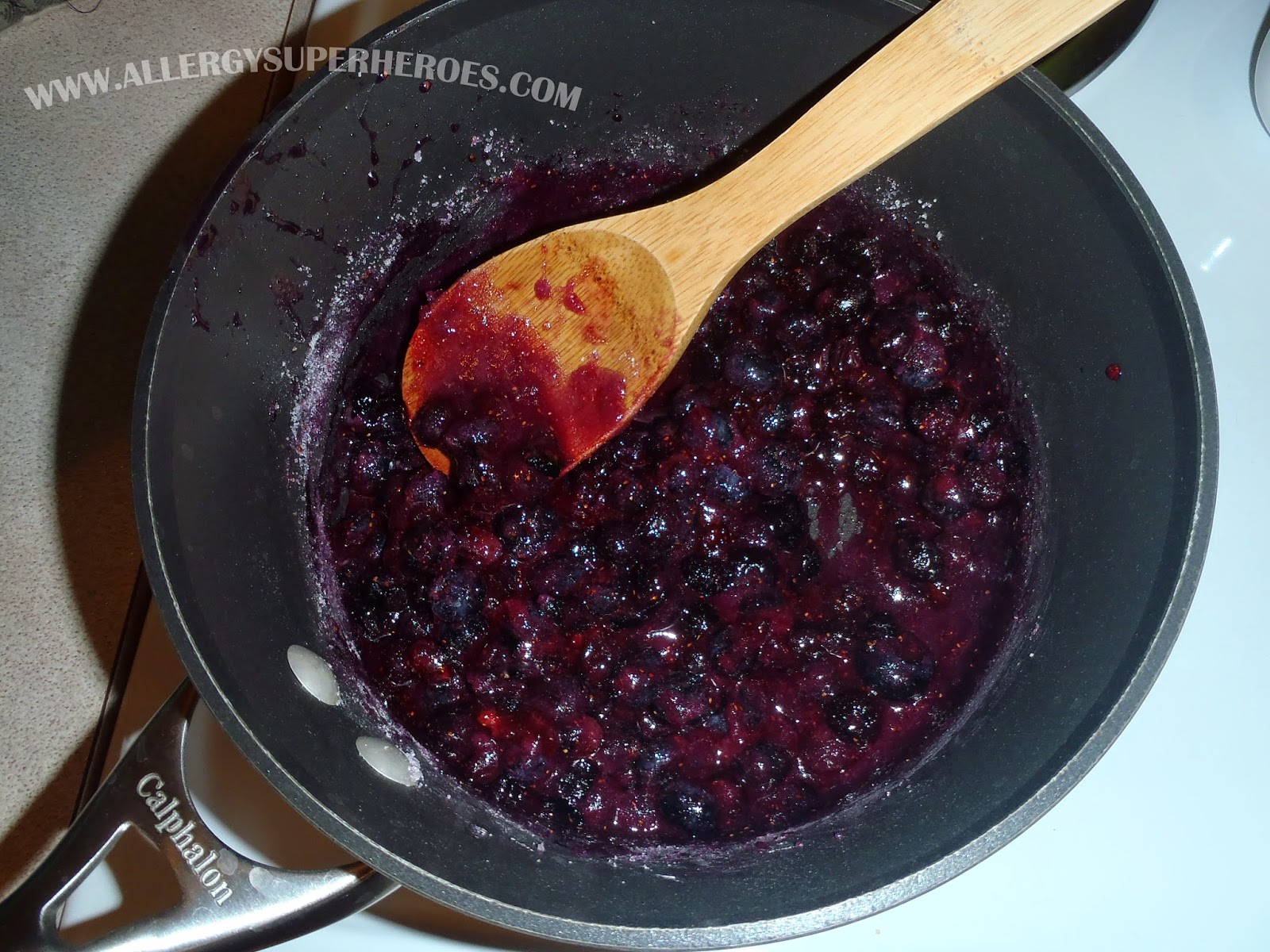 Start by mixing the ground flax with 6 Tbsp water and setting the mixture aside, allowing it to thicken.
Combine 1 1/2 cups of blueberries and 3/4 cup sugar in a pan. Simmer on low or medium-low heat until sugar is melted and mixture is very liquid. This should take about 5 minutes with fresh berries; mine took longer because they were frozen. 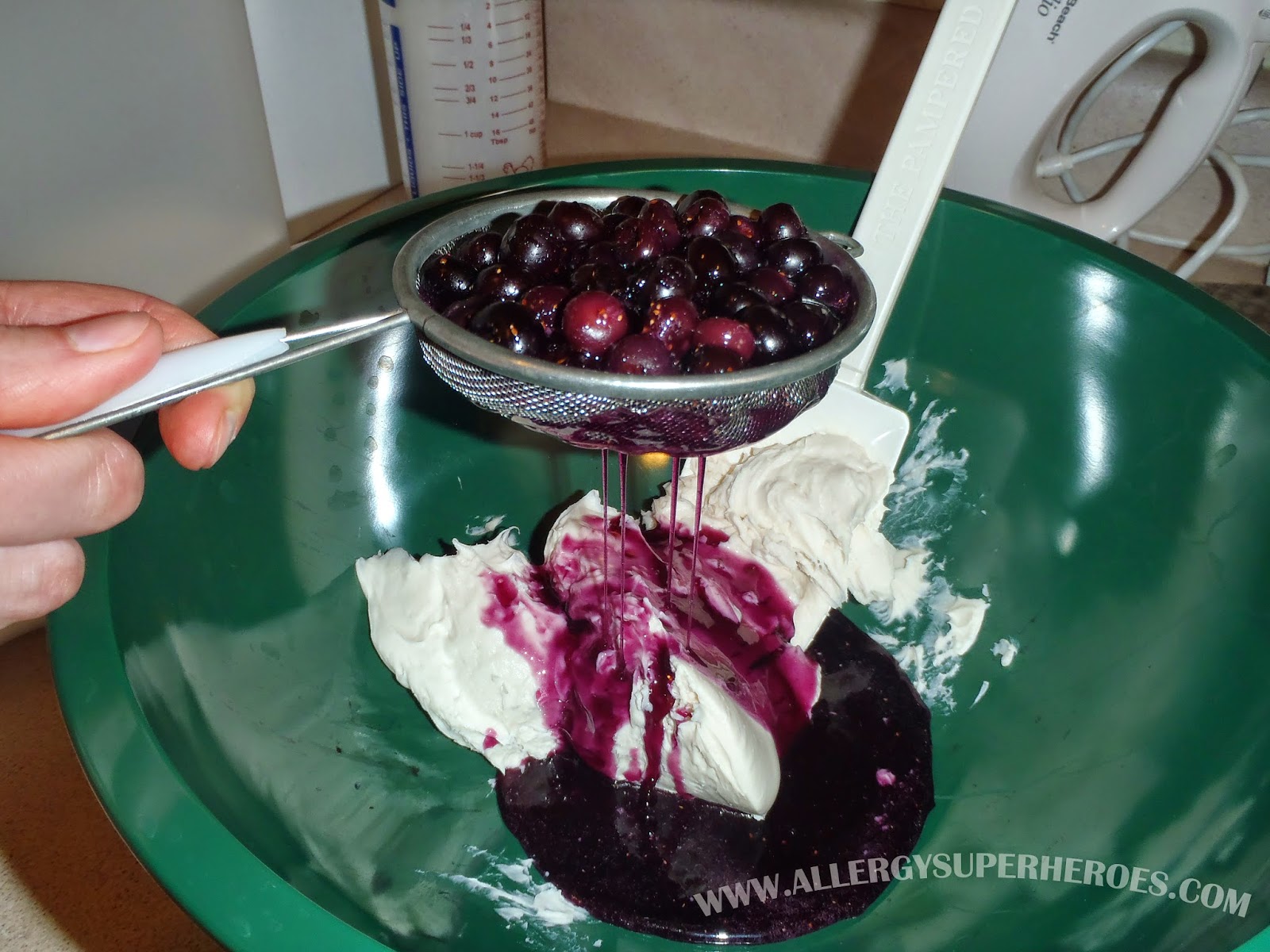 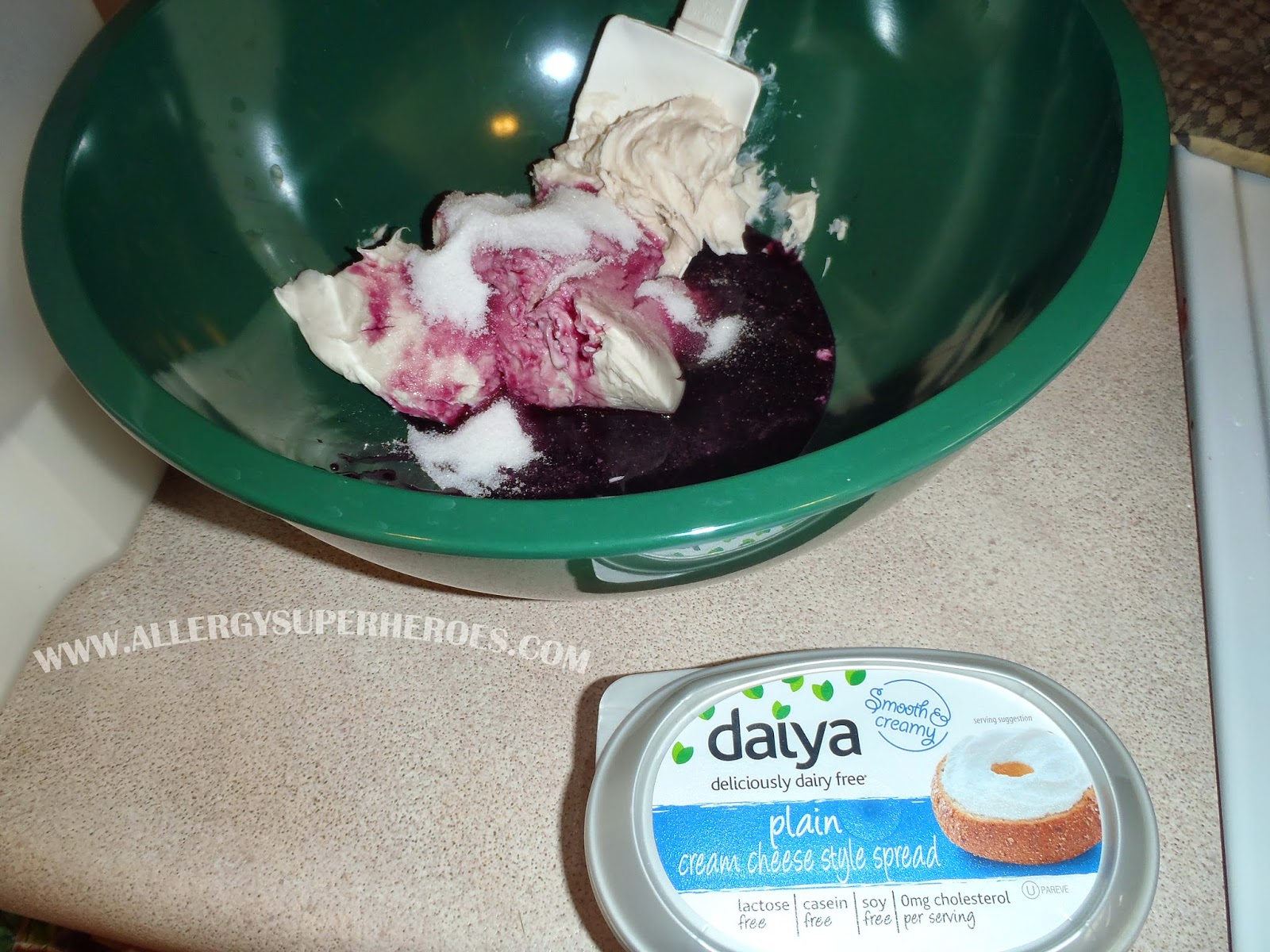 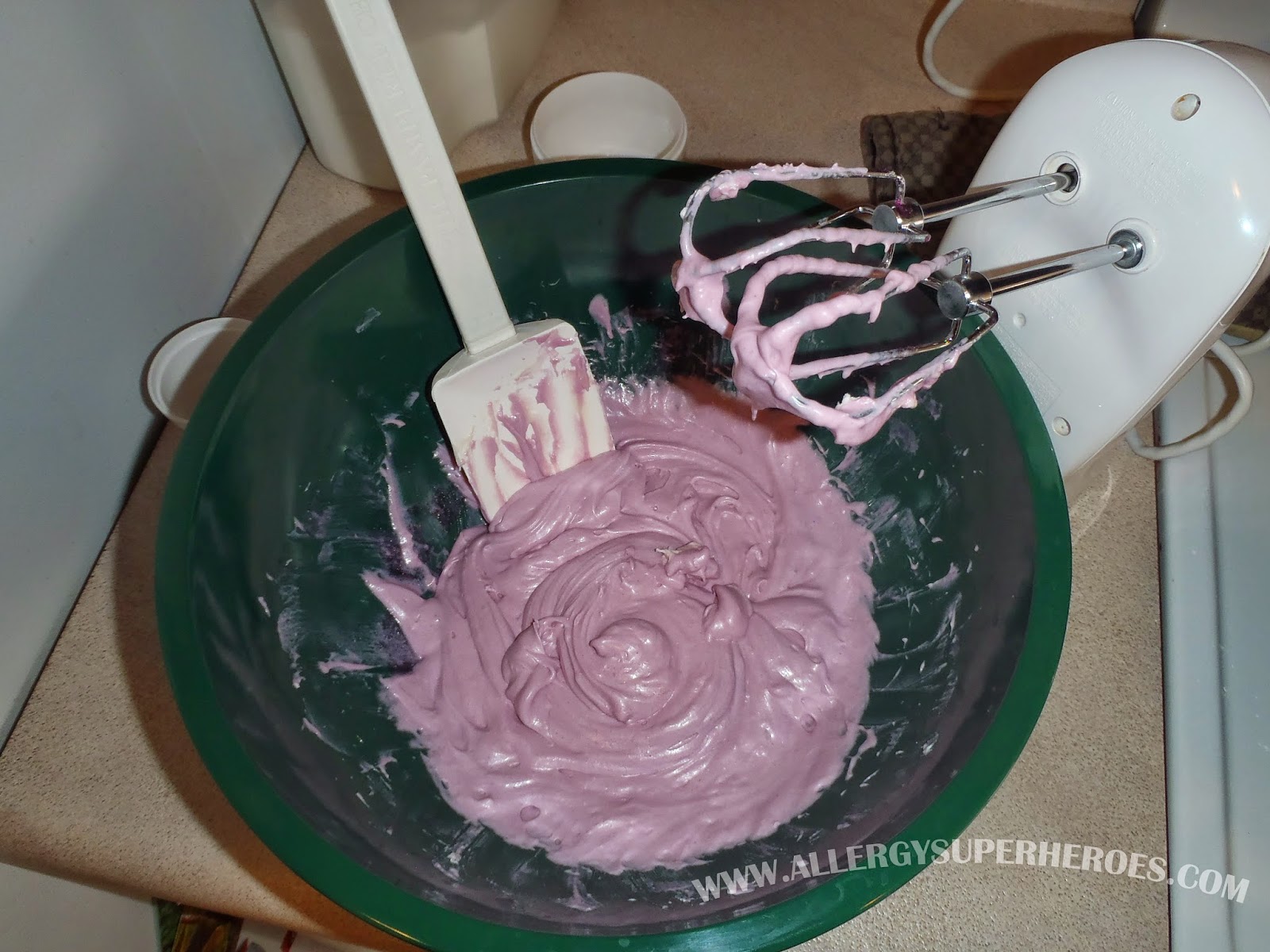 Beat together until fluffy. 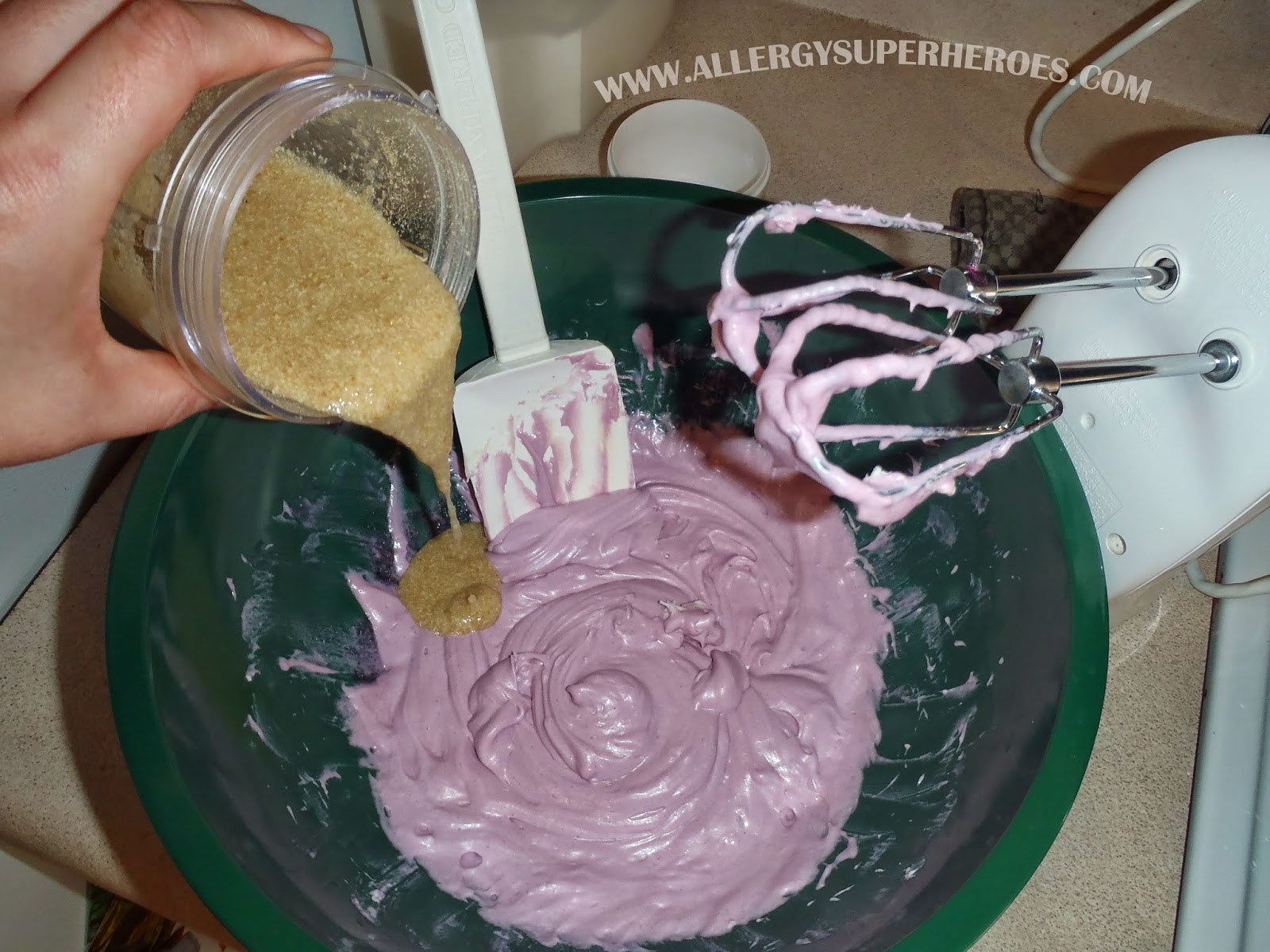 Add the flax mixture and beat until just combined. 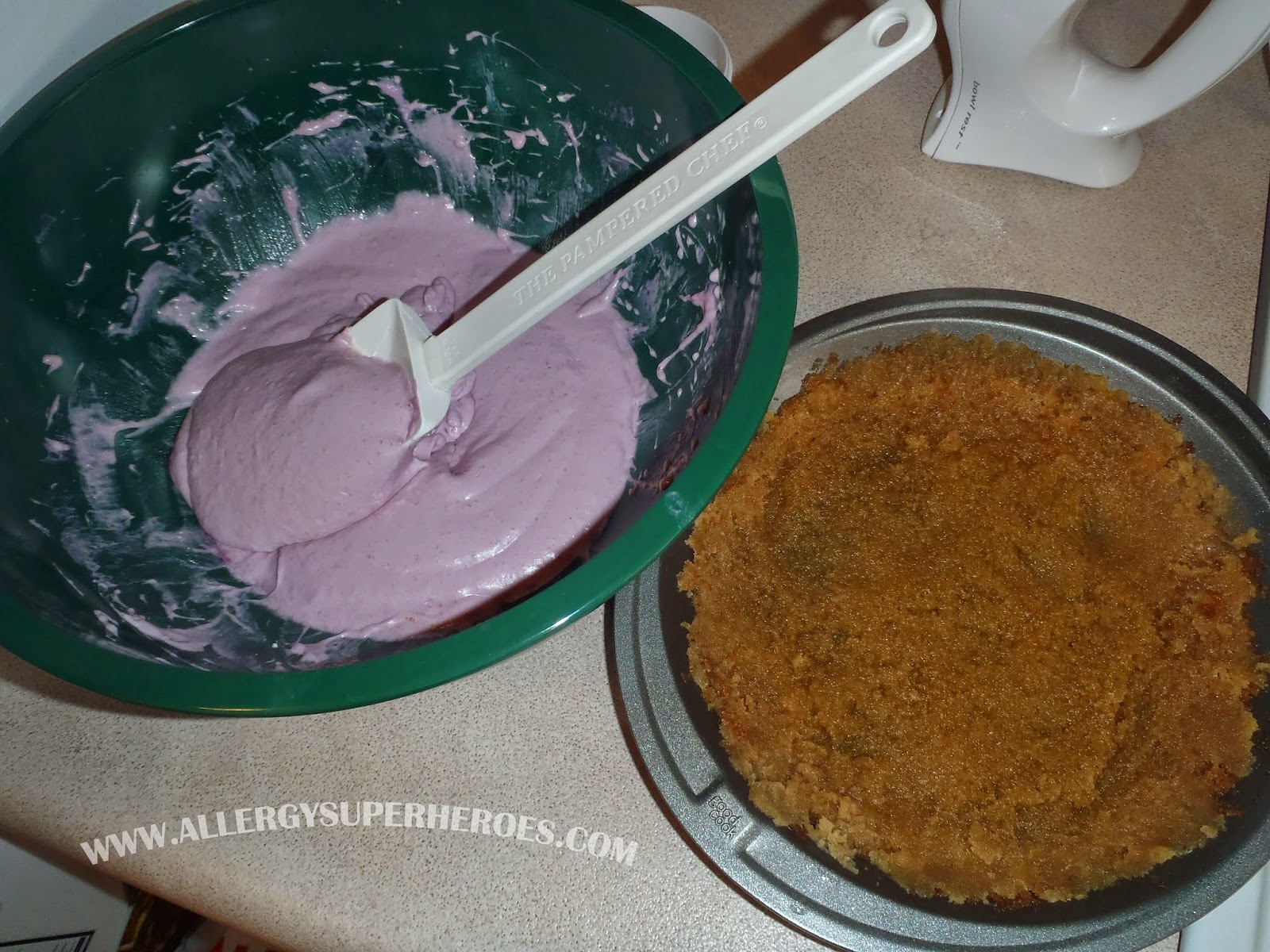 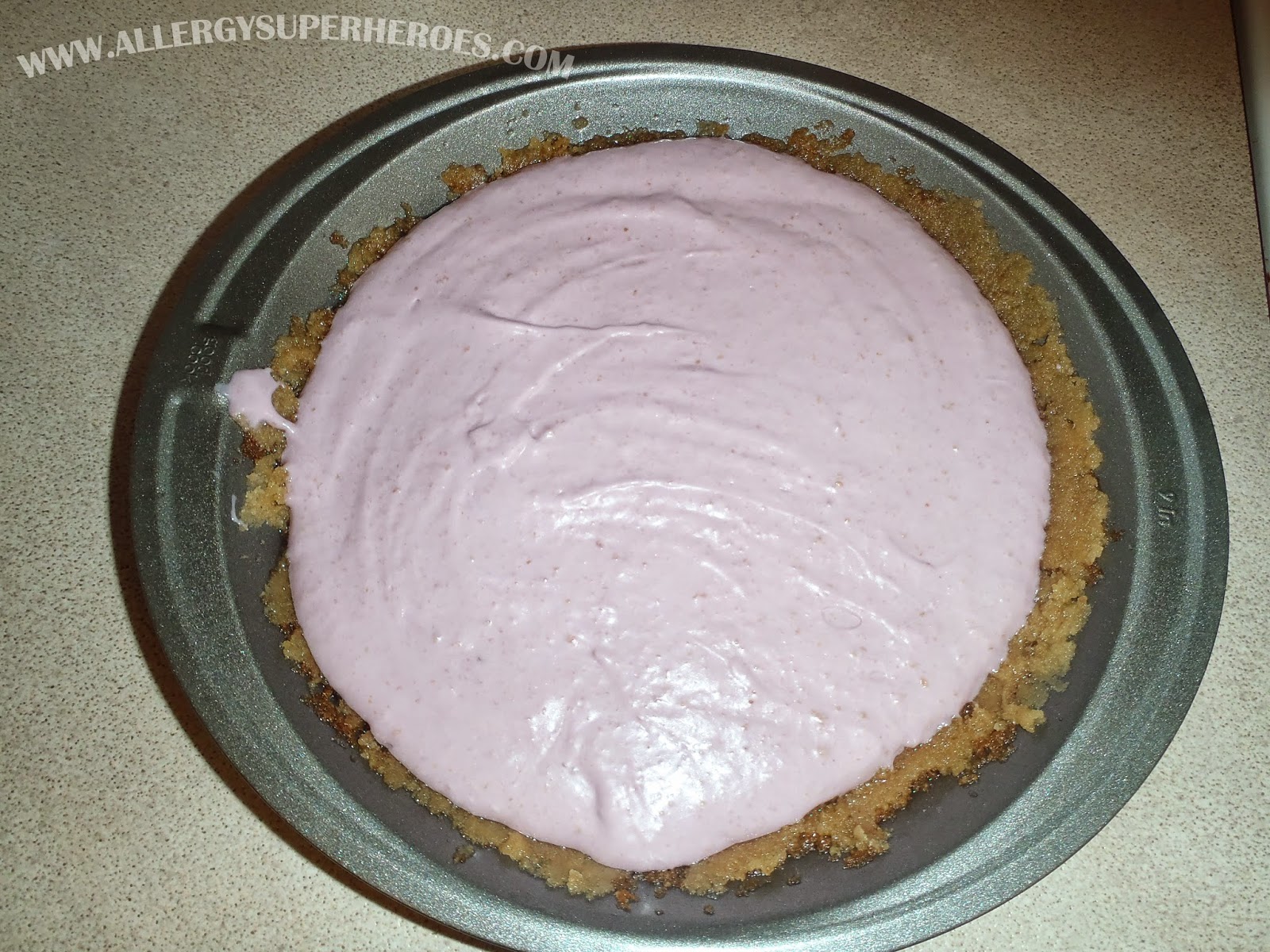 Spread into the pie crust. I had a little bit left over with my 9 inch pie pan, so I put the rest into my muffin tin. 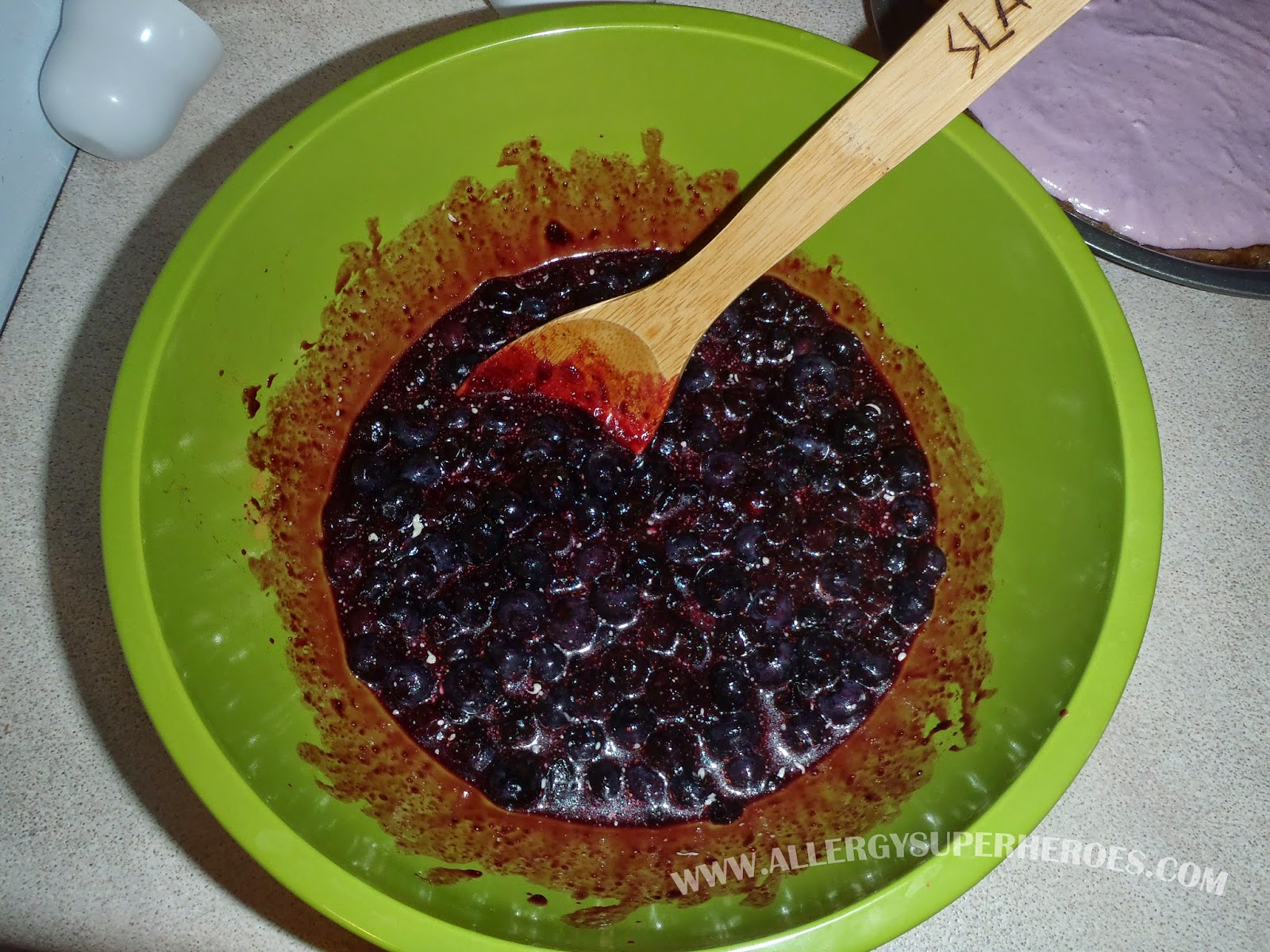 By now, the blueberry mixture should be fully cooked. Remove it to a bowl and allow to cool somewhat. 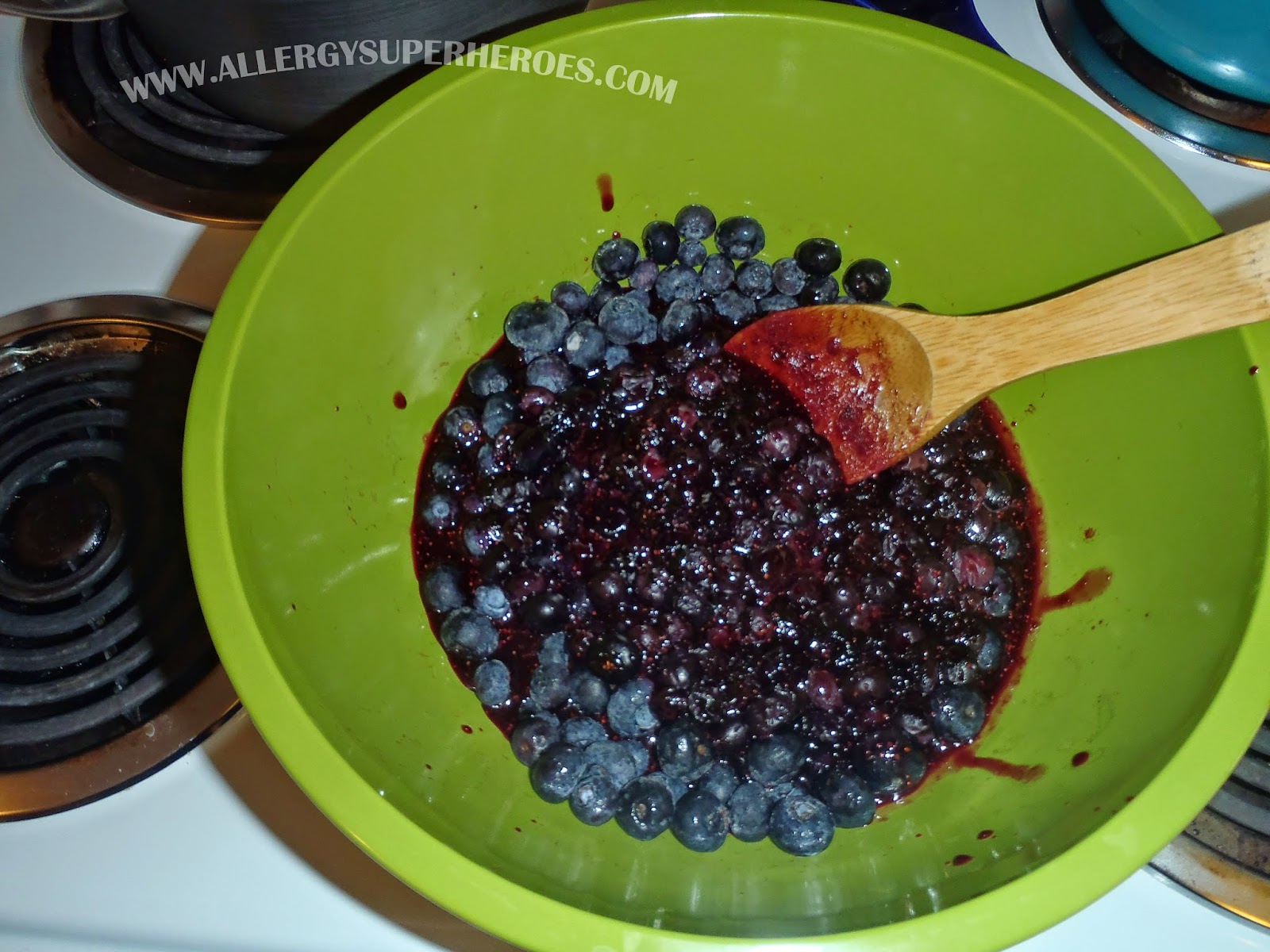 Fold in remaining 2 cups of blueberries, along with the lemon rind, cinnamon, nutmeg, and Earth Balance. 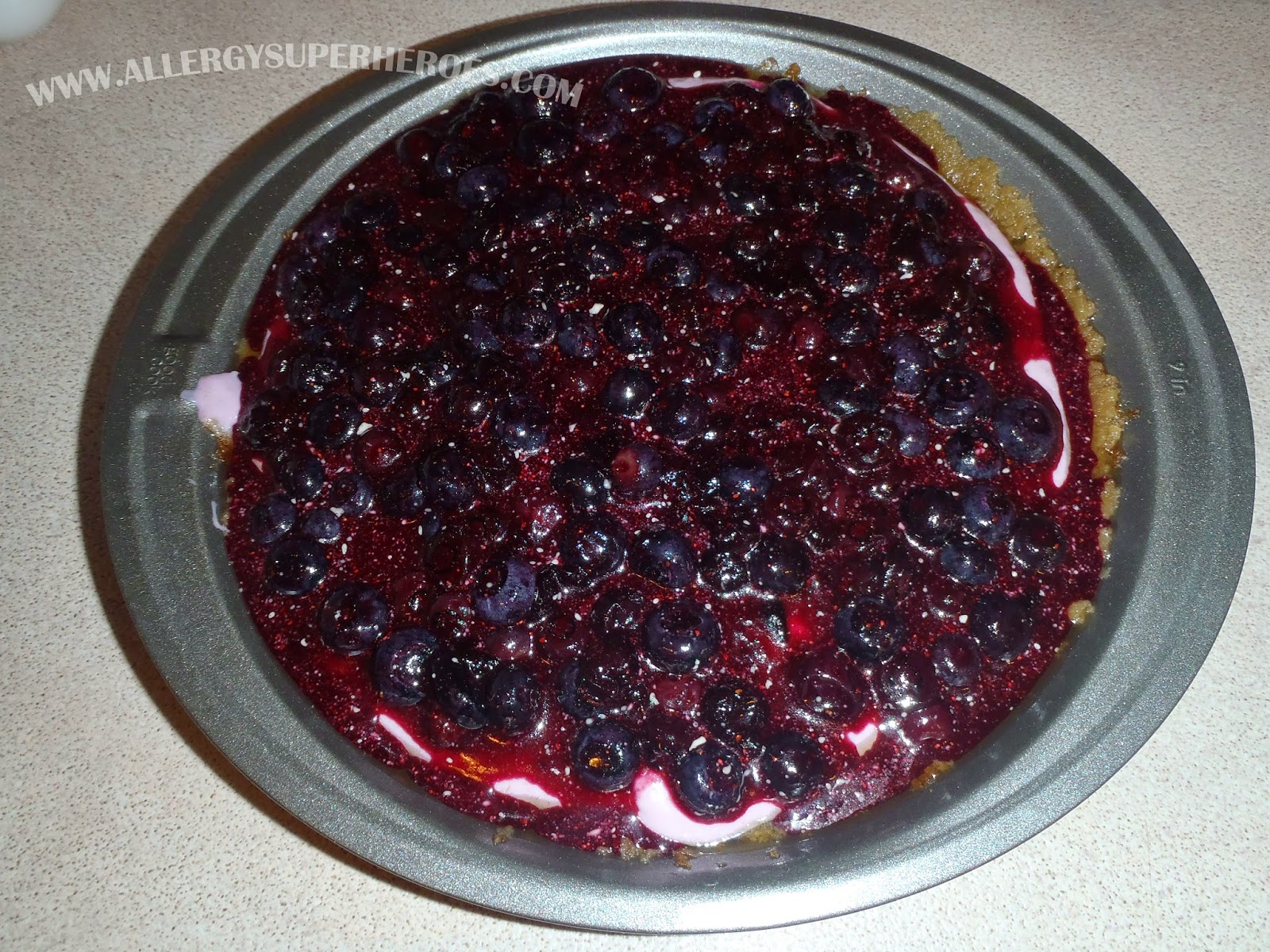 Top the pie with blueberry topping. 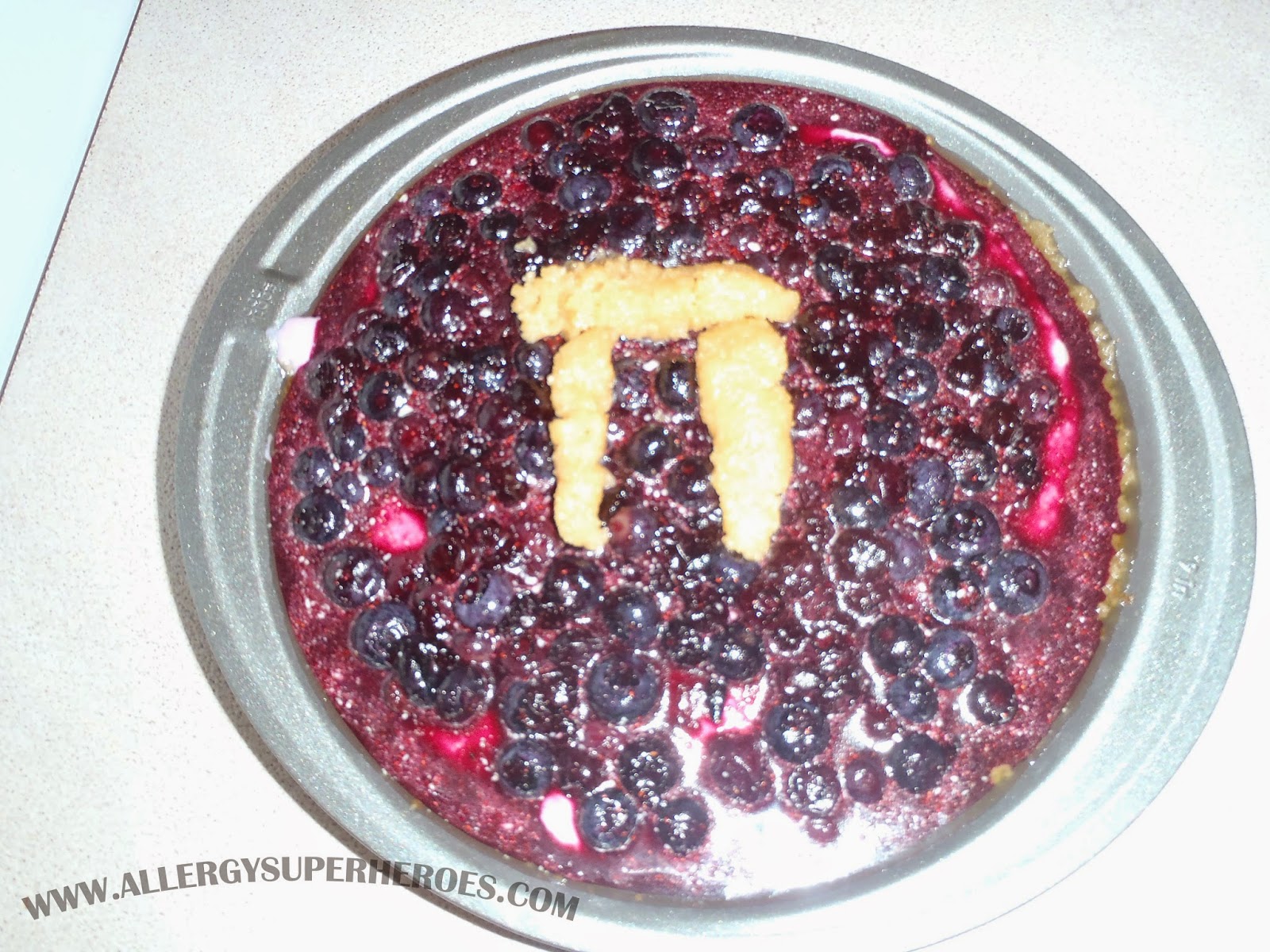 I also reserved a little raw crust mixture to make this pi symbol on the top. 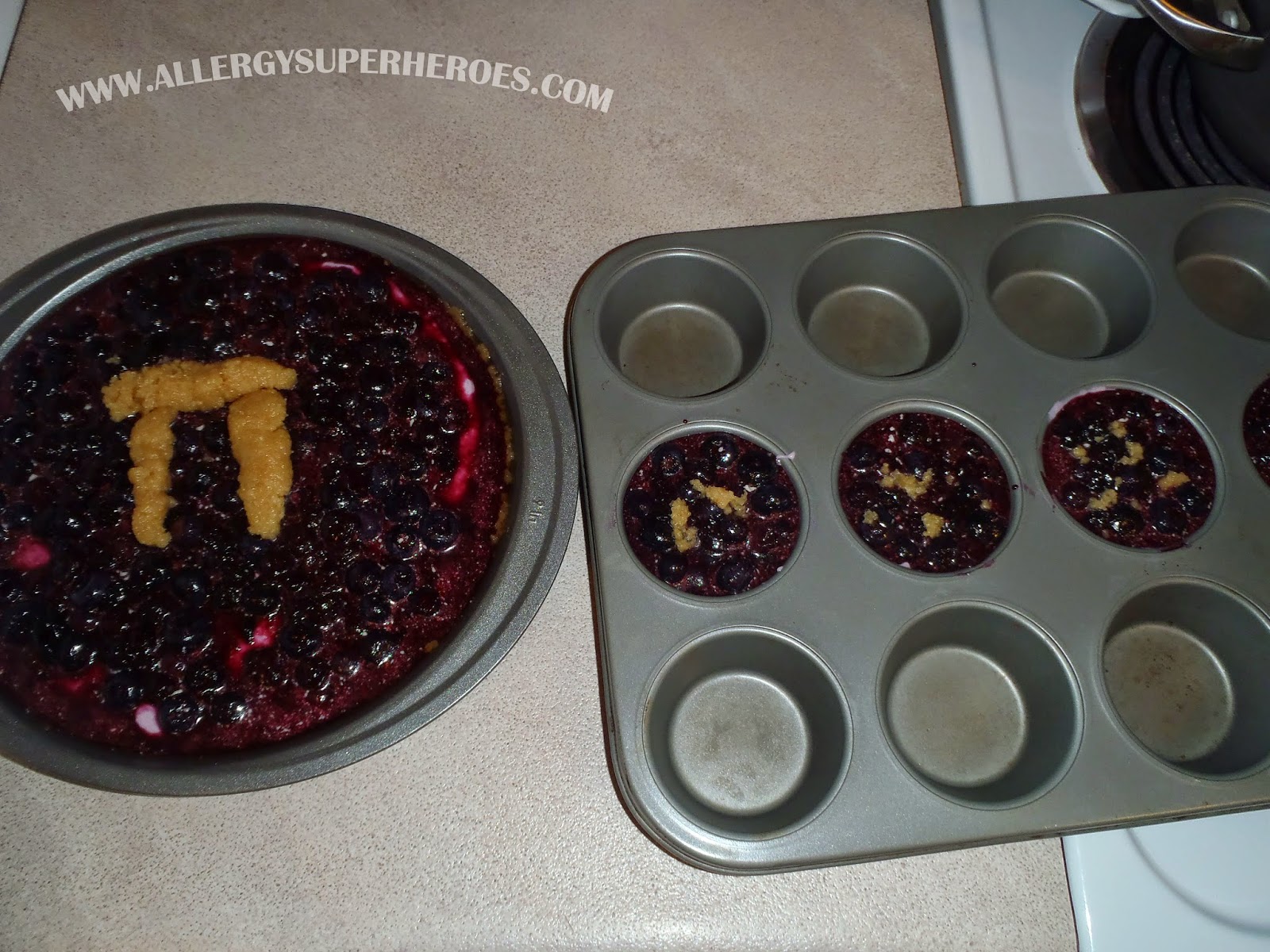 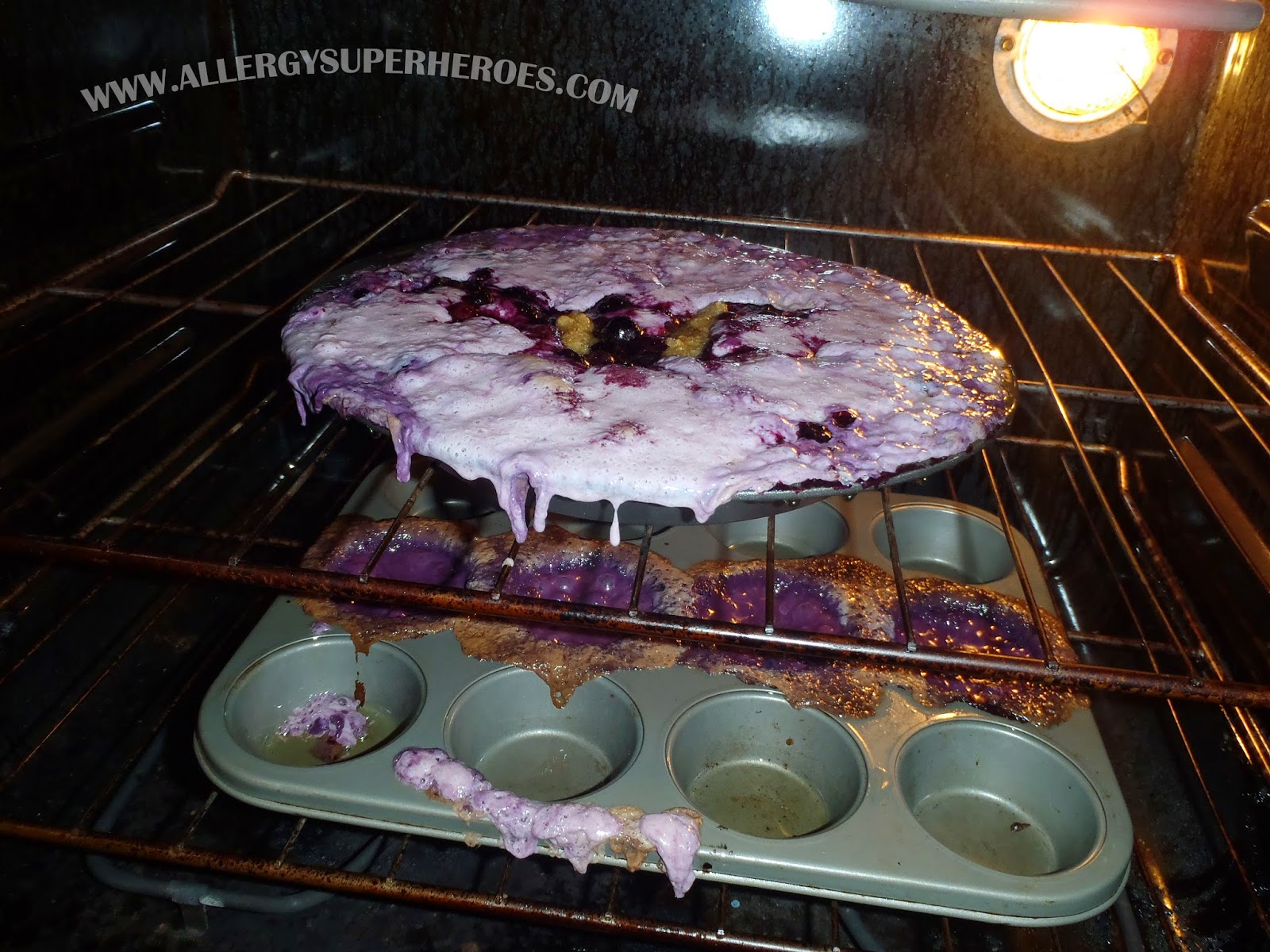 This is where I think I went wrong. The blueberry topping did not stay on top of the “cheese” mixture, it sank and they all mixed together (not to mention boiled over) as you can see in this oven picture. Since the blueberry topping is already cooked, I would leave this off were I to do it again, and just add the topping to the cooked “cheese”cake pie. 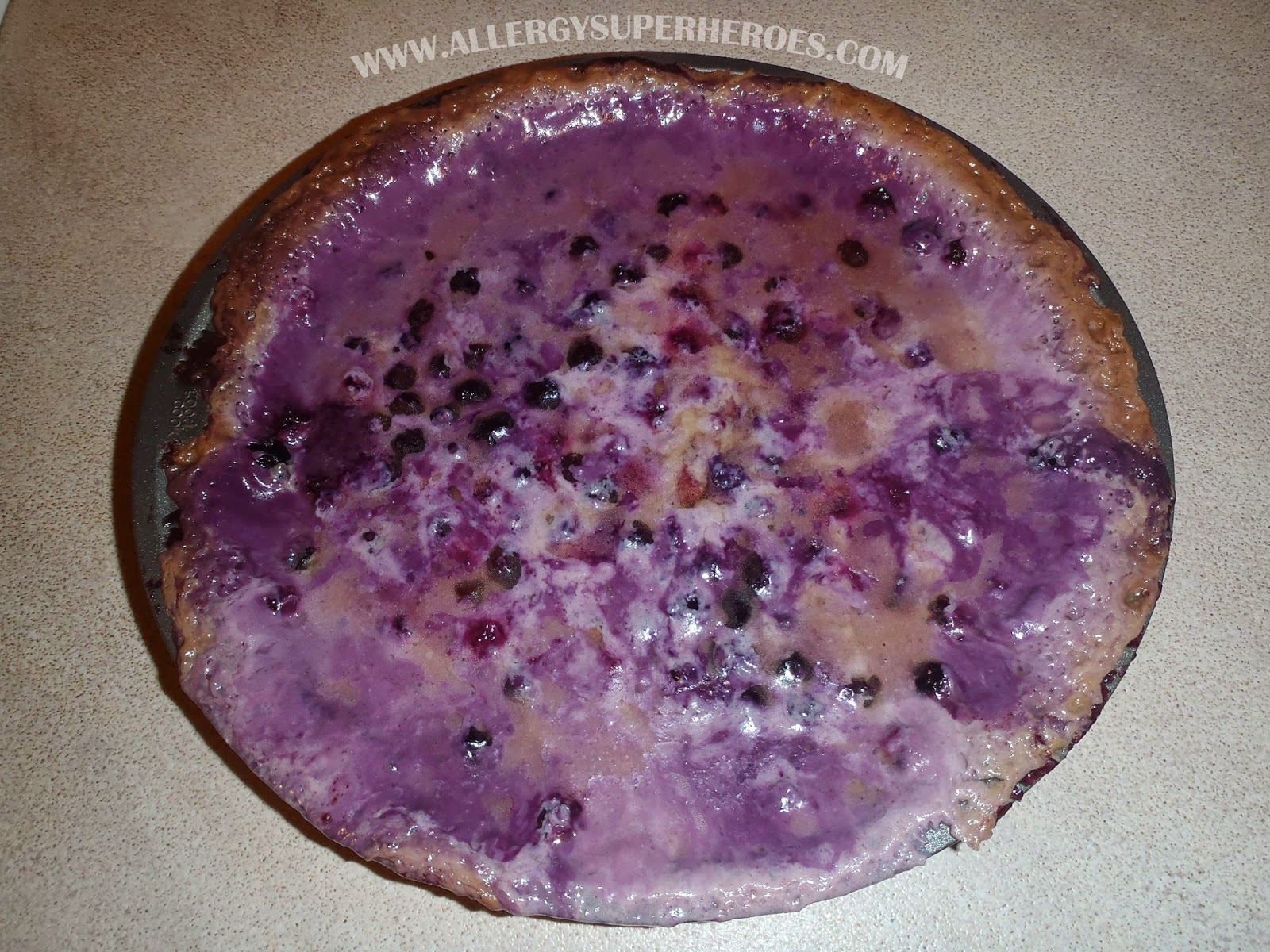 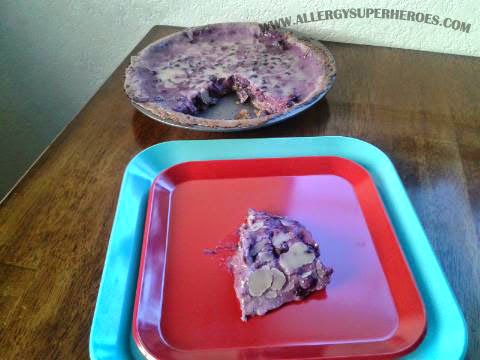 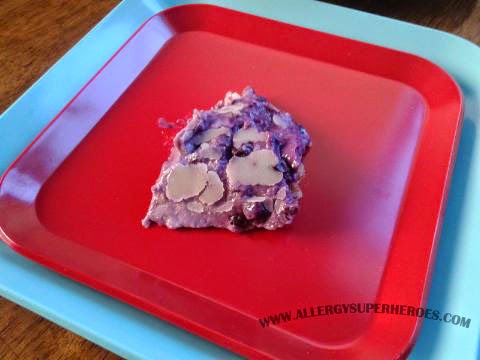 Regardless of looks, this experimental pie tasted quite good. I expect that we’ll try it again sometime, with the tweaks I mentioned above, in the hopes of making a pie that is pleasing to the eye as well as pleasing to the taste buds.
Did you celebrate Pi Day? What kind of pie did you make?
Linking up at Allergy Free Wednesdays and Gluten Free Fridays