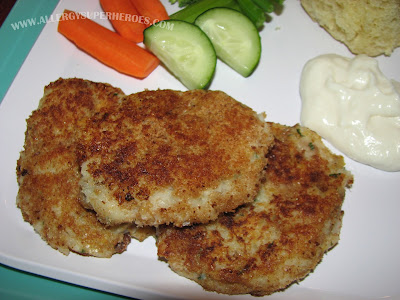 I found this recipe in Parents Magazine a few years back. I had to modify it to edit out egg and for our personal tastes, and it’s now a popular dish in our household. This is a great way to make your own fish sticks, without all the extra junk that’s in frozen ones!

It had been a while since I made these, so I was concerned that my picky eaters wouldn’t like them anymore. I was pleased to see that my fears were unfounded, as they both wolfed them down with a smile!

Cod Cakes
Contains dairy. Our also contained wheat, and soy.
ETA: And fish. Duh, fish! I feel as little foolish for not mentioning the obvious.

Allergen note, Wheat and Soy: These were both in the breadcrumbs. By using safe breadcrumbs or making your own (with this recipe here) you could eliminate both of these allergens.
Allergen note, Dairy: I think it would taste fine without the Parmesan. You’d have to further modify the dip, though. 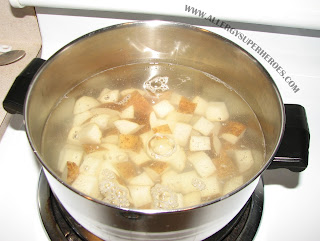 Cut the potatoes into 1 inch chunks. Place in a pot, cover with water, and bring to a boil. Cover and boil on medium-high for 15-20 minutes, or until soft when pierced with a fork.

While the potatoes are boiling, measure 2 Tbsp of ground flax each into two separate bowls or glasses. Into the first bowl, add 6 Tbsp of cold water, whisk together, and let the mixture sit while you keep working. This is Flax Goop #1.

Into the second bowl of flax, add 8 Tbsp (or roughly 1/4 cup) of water. Whisk together and let it sit. This is Flax Goop #2.

When the potatoes are tender, use a slotted spoon to lift them out to a large bowl. Add the cod to the pot, return to boiling, and boil (covered) for roughly five minutes, or until fish flakes easily. 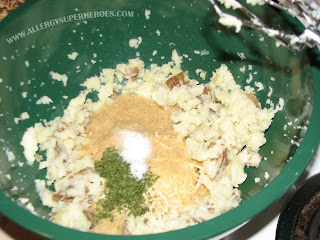 Mash the potatoes. Then add the cod, Parmesan, Flax Goop #1, parsley, and salt. 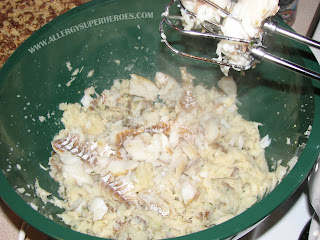 Mix together until well-incorporated.

Once you’re ready to cook the fish cakes things happen pretty fast, so have the rest of your meal (including the dip) ready to go before you fry the fish cakes. 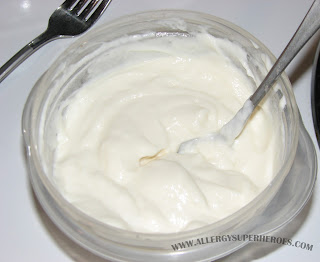 To make the dip, stir together the Greek yogurt, vegan mayo, lemon juice, and salt in a small bowl. Set aside for your meal. 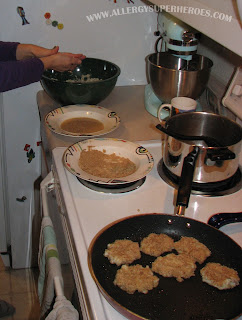 Heat a large pan over medium heat, and either heat a couple tablespoons of oil or spray pan with cooking oil. Prepare an assembly line: bowl of fish, Flax Goop #2, bowl (or plate) of breadcrumbs, and pan.

Note: Every previous time I’ve made this recipe, I’ve tried swirling olive oil around in the pan before cooking the fish cakes, and I always wind up with some that have WAY too much oil and others that don’t brown because they don’t have enough. For the first time this weekend, I used a cooking spray instead. I used the Winona Pure Oil we got in our swag bags at FABlogCon. It worked SOOOOO much better that I’m always going to do it this way. The pan got evenly sprayed without pooling and using too much, and a quick spray as I flipped each one ensured that the other sides would brown as well. This was a much better solution than I’ve been doing before, and I highly recommend this method to you! 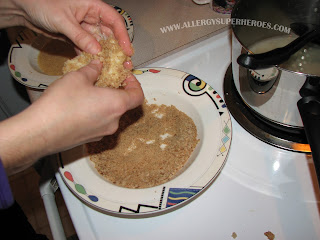 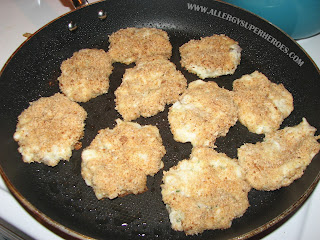 Repeat until the pan is full. 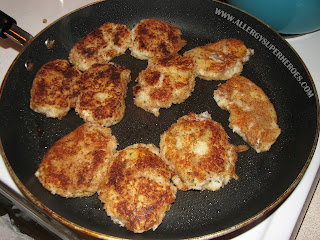 Cook roughly four minutes on each side, or until golden. Add more oil when you flip the cakes. 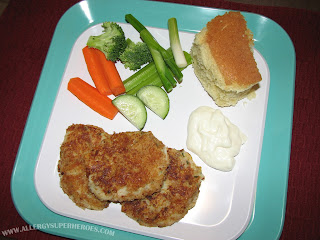 Serve with the dip on the side. 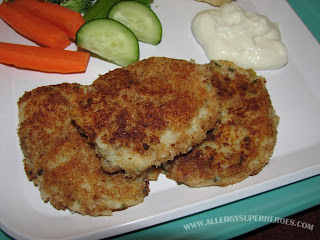 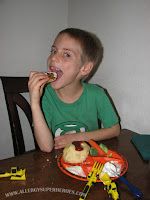 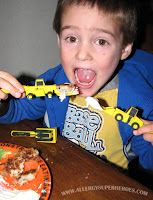 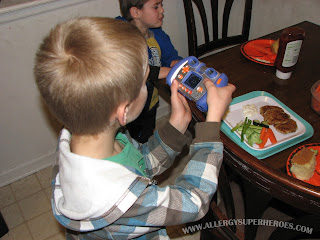 My little food photographer decided to pull out his own camera and get some pics of dinner after I was finished. 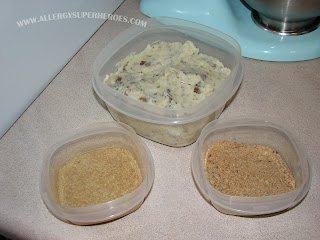 These taste best when fried fresh, so if you anticipate having leftovers, refrigerate the fish mix, Flax Goop #2, and breadcrumbs to cook up fresh on day #2 rather than cooking the whole batch and reheating.

Linking up at Allergy Free Wednesdays and Gluten Free Fridays