Whilst browsing Instagram a few weeks ago, I discovered a picture with the description that the poster had just removed their vegan meringues from the oven.

Wait, what? VEGAN meringue? Sure enough, they also had the hashtag #eggfree in there. I was quick to ask them how, and they kindly replied.

After that, I found another half-dozen posts on vegan meringue. Upon striking up a dialogue with these other people, I discovered that this new vegan meringue recipe had just been revealed at the beginning of the month on a vegan facebook page. I went hunting, discovered the full process, and gave it a try. (Here is the original post, in all its glory, along with its 484 comments.)

Lo and behold, IT WORKED! The liquid version tastes just like meringue, and the cooked meringues melt in the mouth just the way meringue is supposed to. 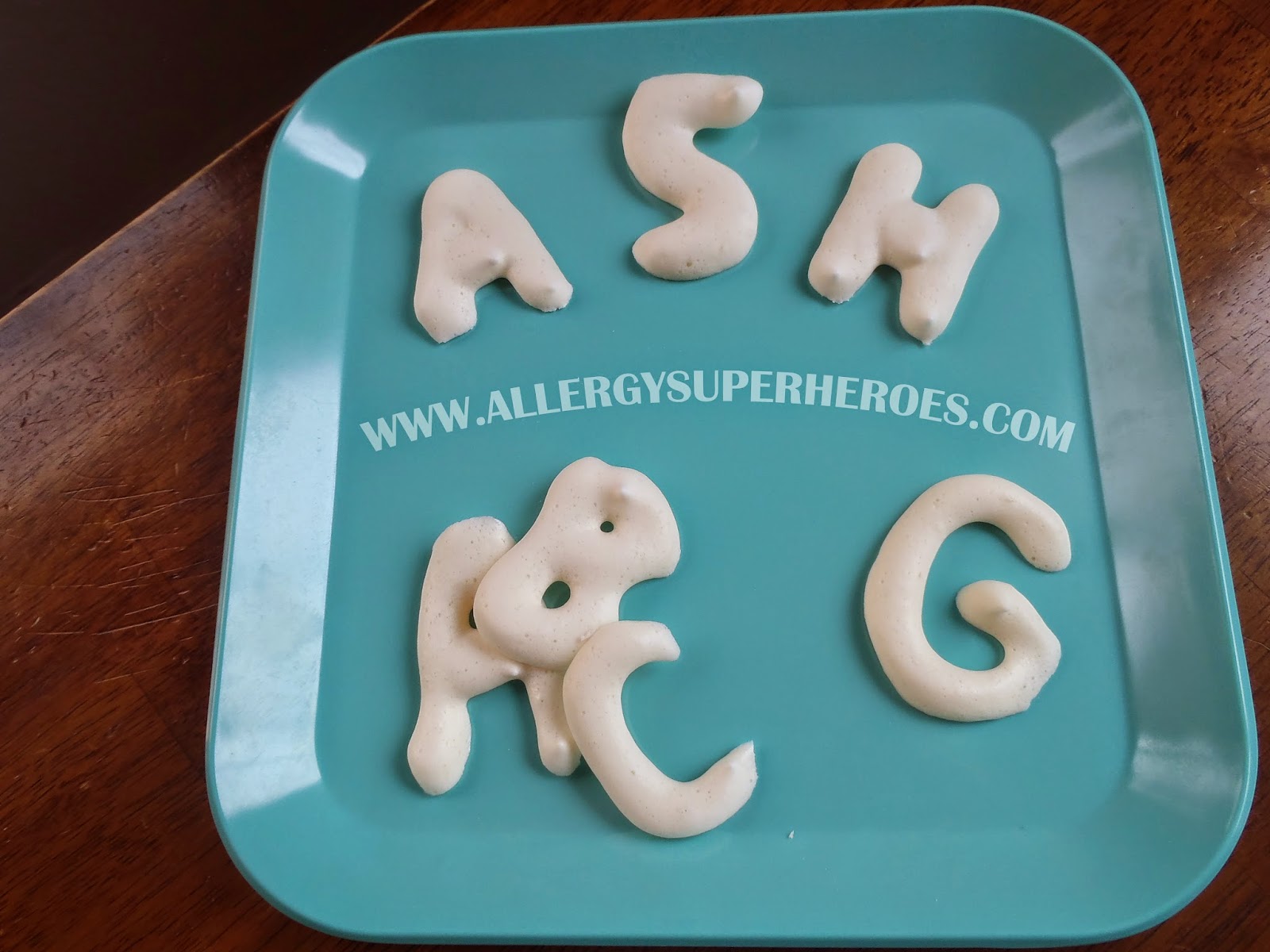 Now, meringue isn’t exactly something that we’ve felt is missing from our household diet. I’d only made regular meringue once in my adult life (although I have fond childhood memories of lemon meringue pie.) I may even need to make a batch of regular meringue (carefully kept away from the egg-allergic kiddo, of course) just to do a side-by side comparison. But extended family members who taste-tested for me all agreed that this recipe tastes and behaves like real meringue.

When I told hubby that I’d just found a recipe for vegan meringue that I wanted to try, his response was lukewarm. But I’m excited. Not just about this recipe itself, but about its further implications. If I can make meringue, something I’d assumed depended on real-life egg whites in order to function, then there are all sorts of other recipes that I might be able to make egg-free too. But more on that if the experiments work.

For now, here is the recipe for: 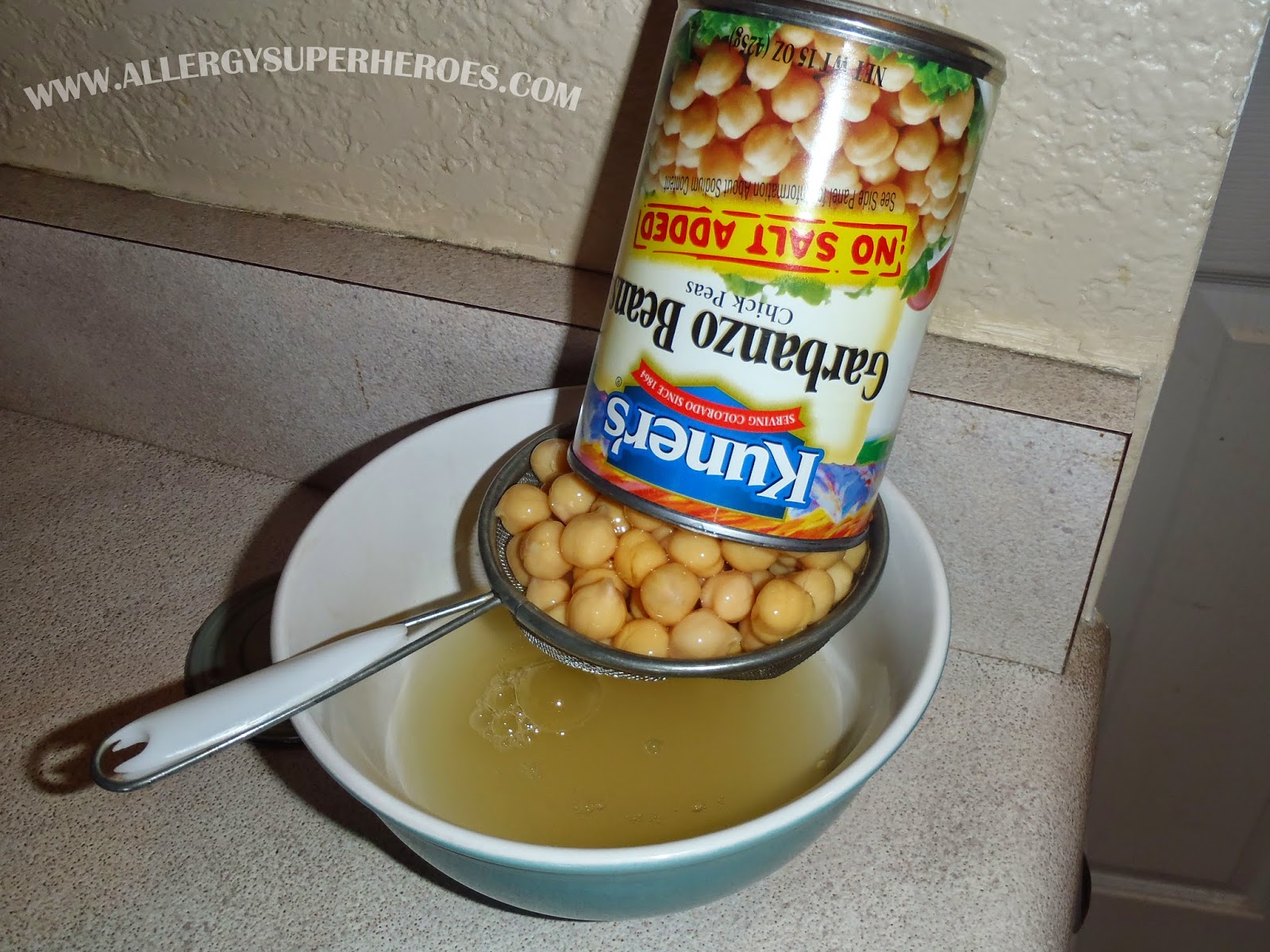 Drain your can of chickpeas and keep the liquid. I just upended the jar on a strainer balanced on a small bowl.
You will not need the chickpeas themselves, just set them aside or store them in the fridge. You can make hummus, or use them as you wish. 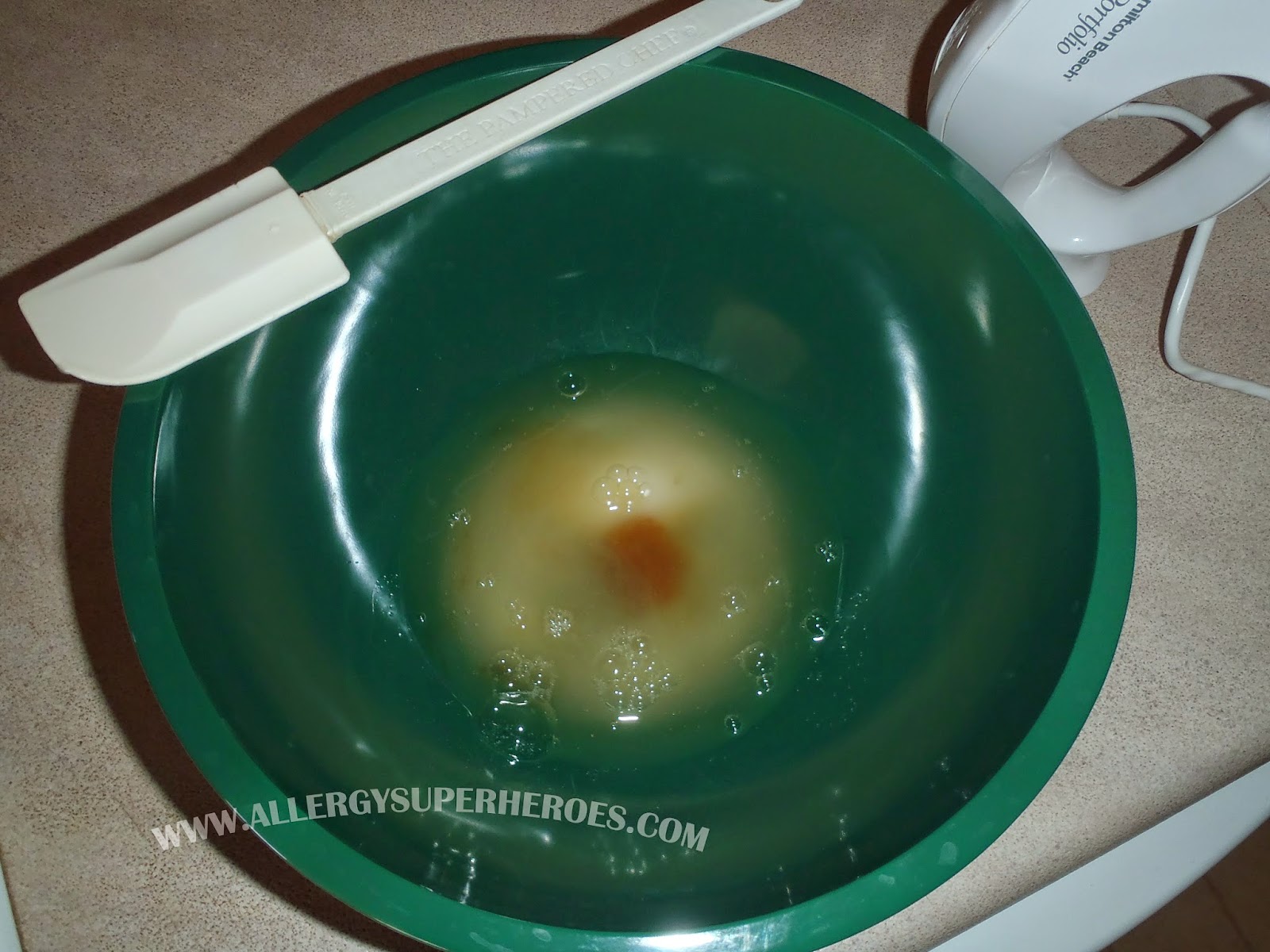 Add all the ingredients to a bowl.

The vanilla is not strictly necessary for this recipe to work. But some of the other people trying this out reported a very subtle beany flavor in the meringue, so I added the vanilla to mask that. 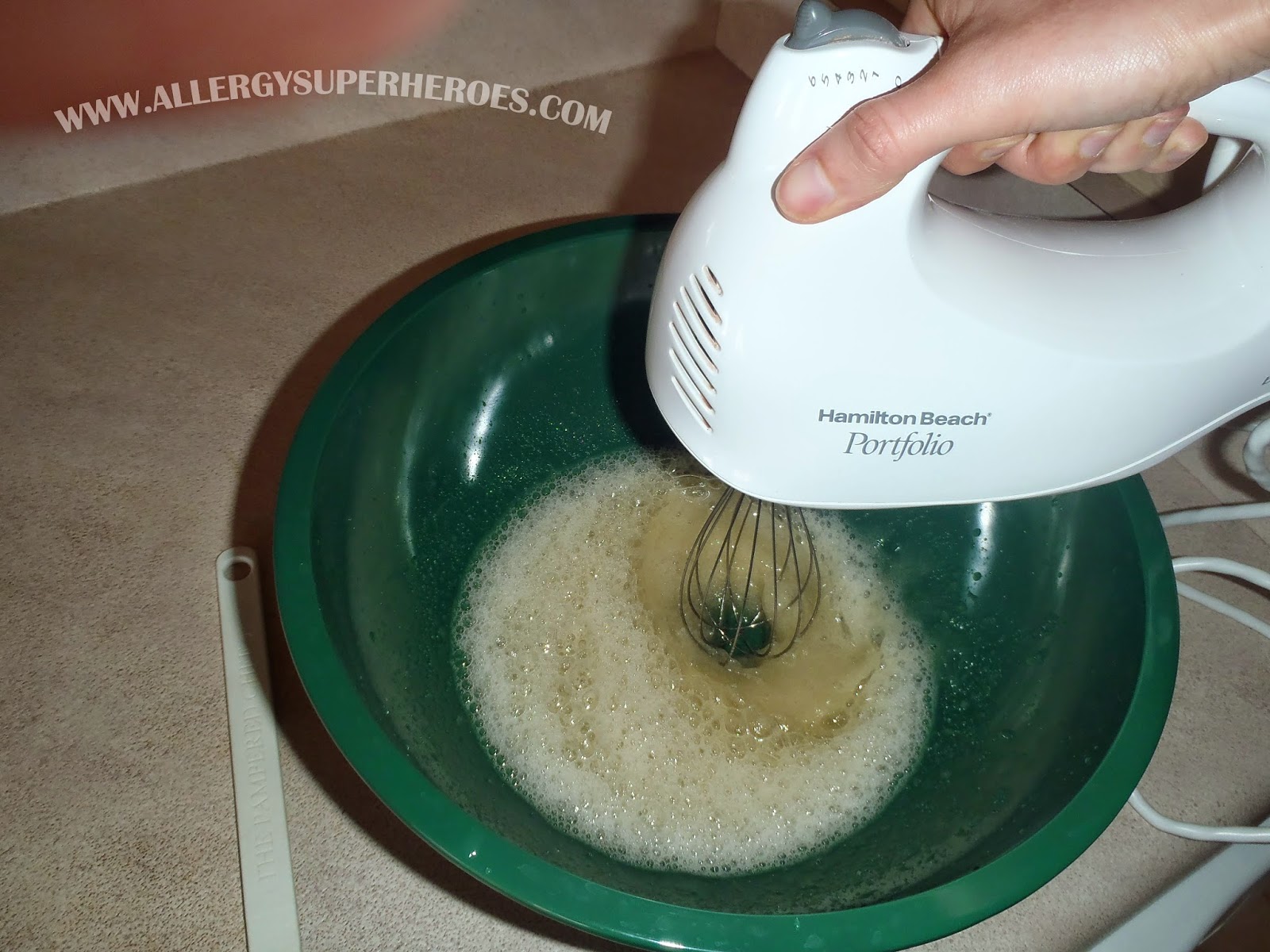 Start beating! It’ll take 10-12 minutes on high speed to get the mixture to form stiff peaks, which is what you are going for.
This is after about one minute. It got foamy.
When making regular meringue, I guess it’s common practice to start adding the sugar a little at a time after the eggs and whatever-else-goes-into-regular-meringue gets foamy. I didn’t discover this until after I’d made mine. Mine still whipped up fine, but I believe other people making this recipe have followed a more traditional sugar-adding approach. Use whatever feels better to you. 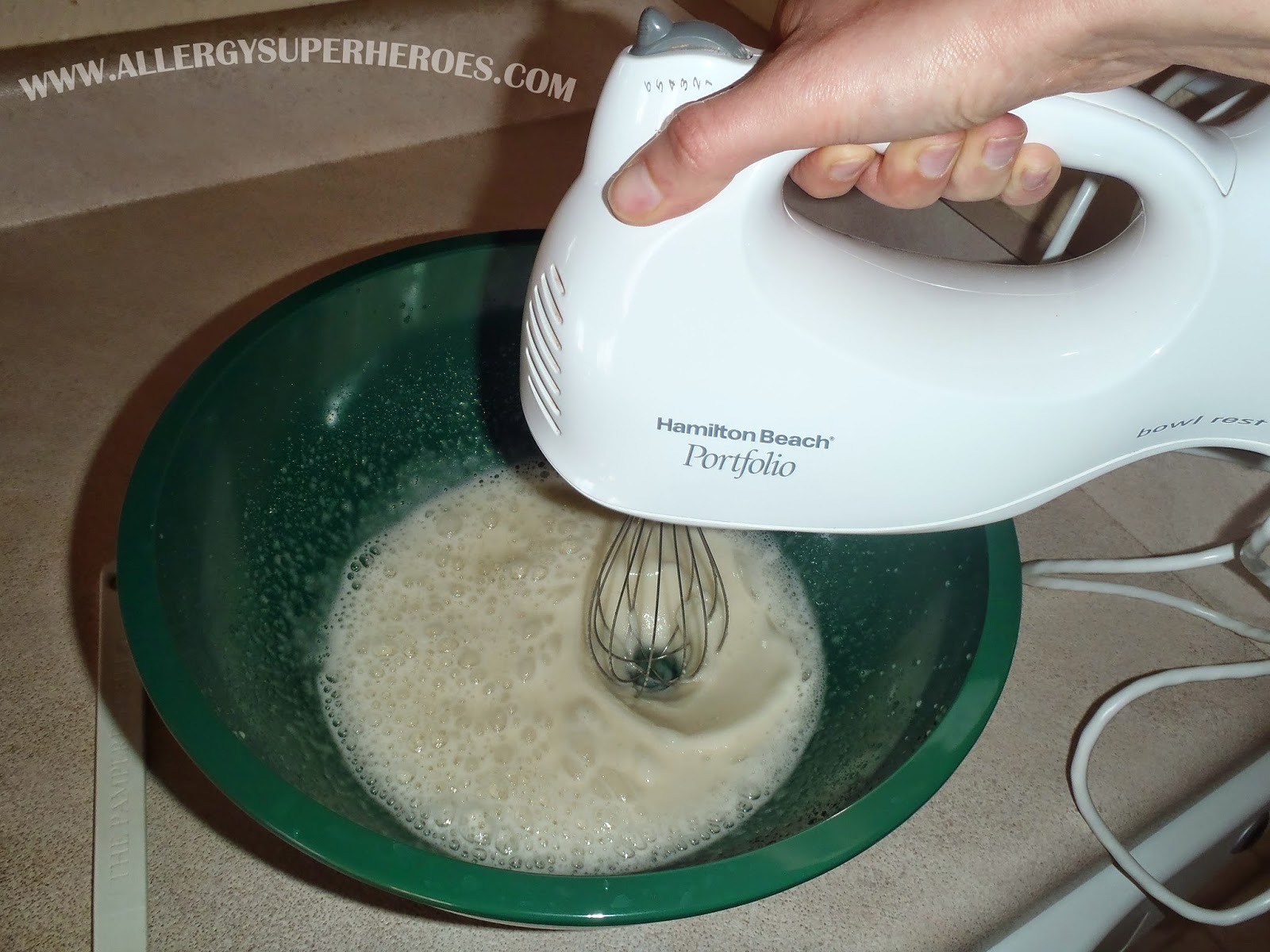 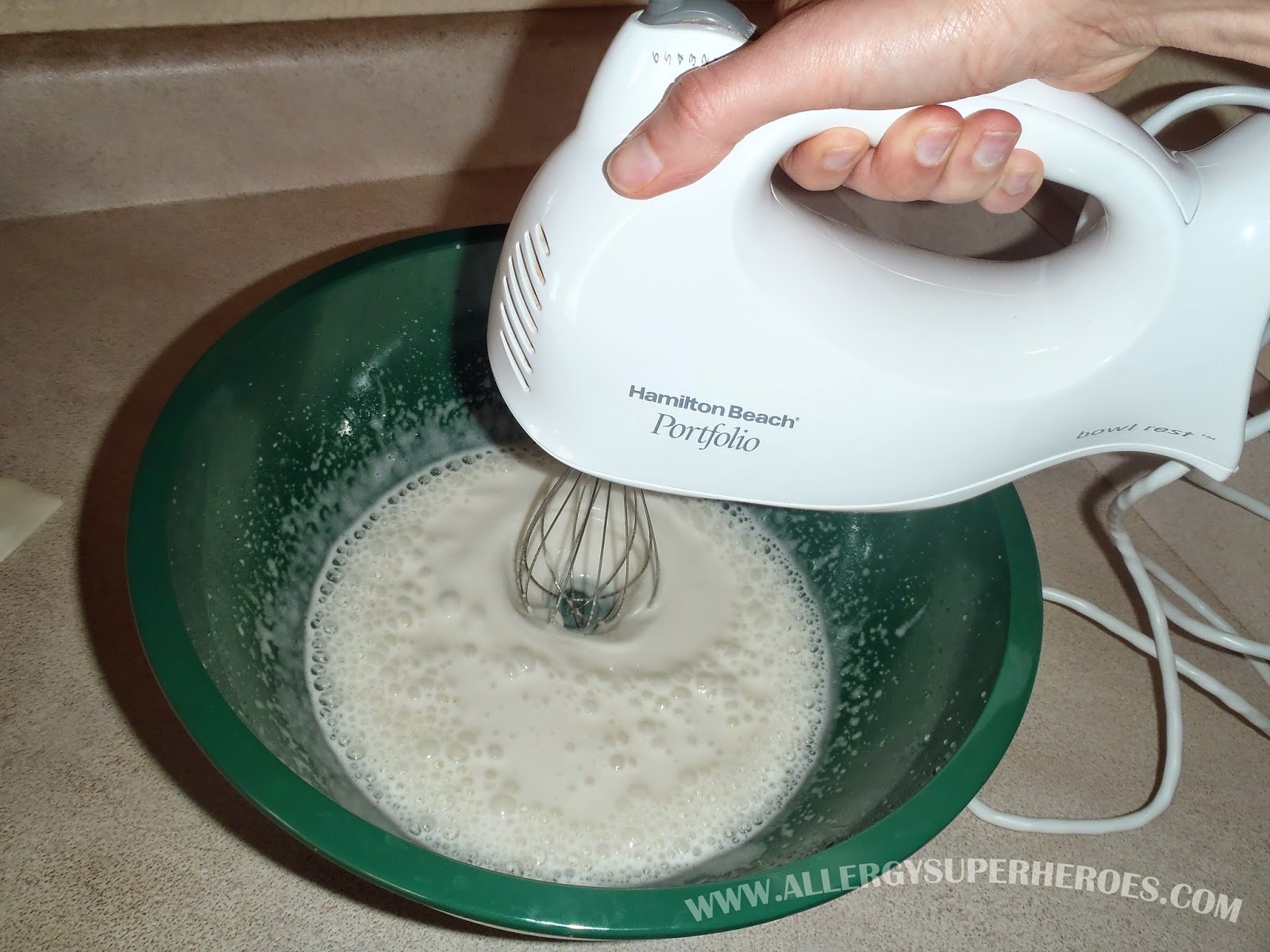 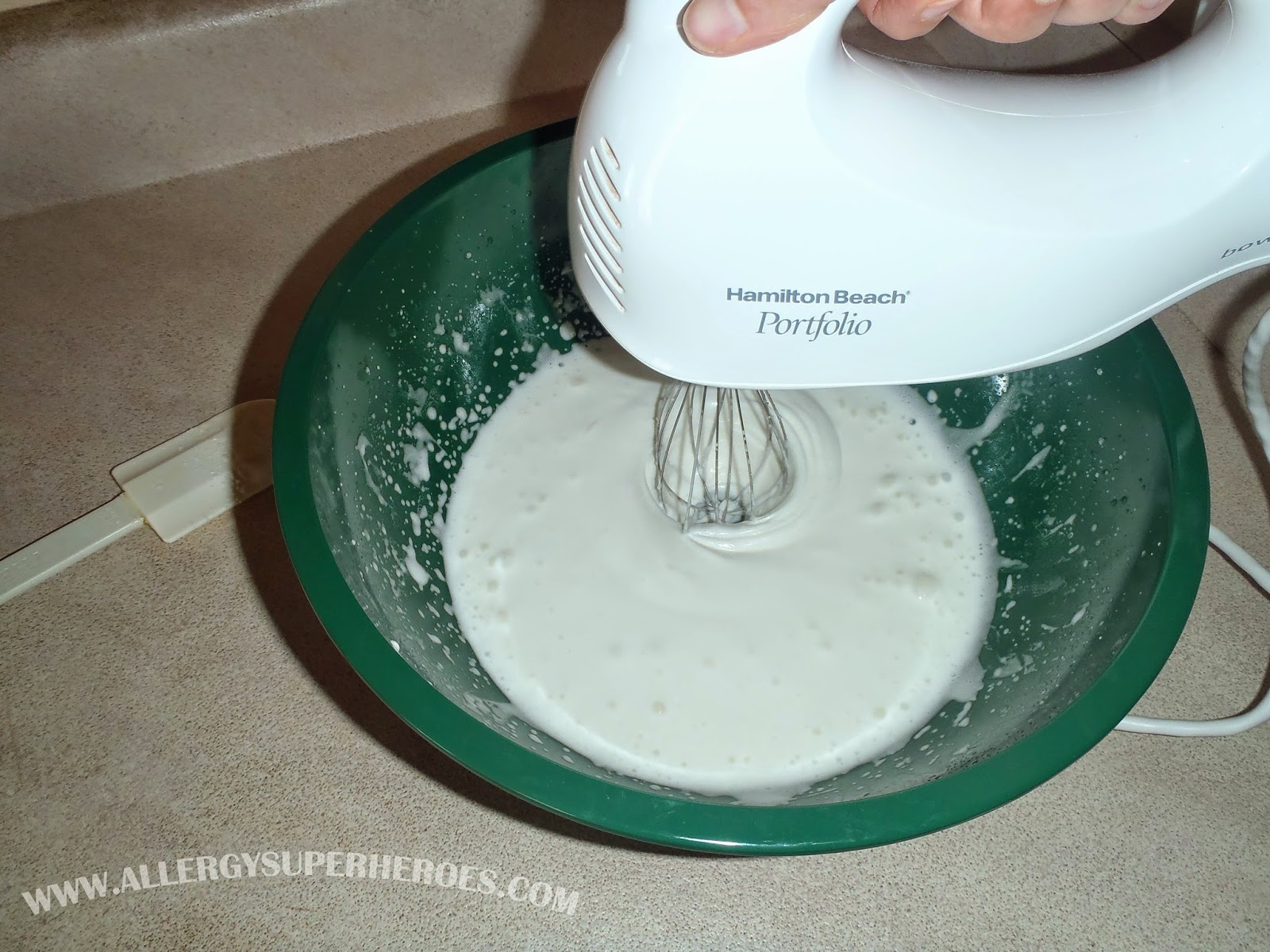 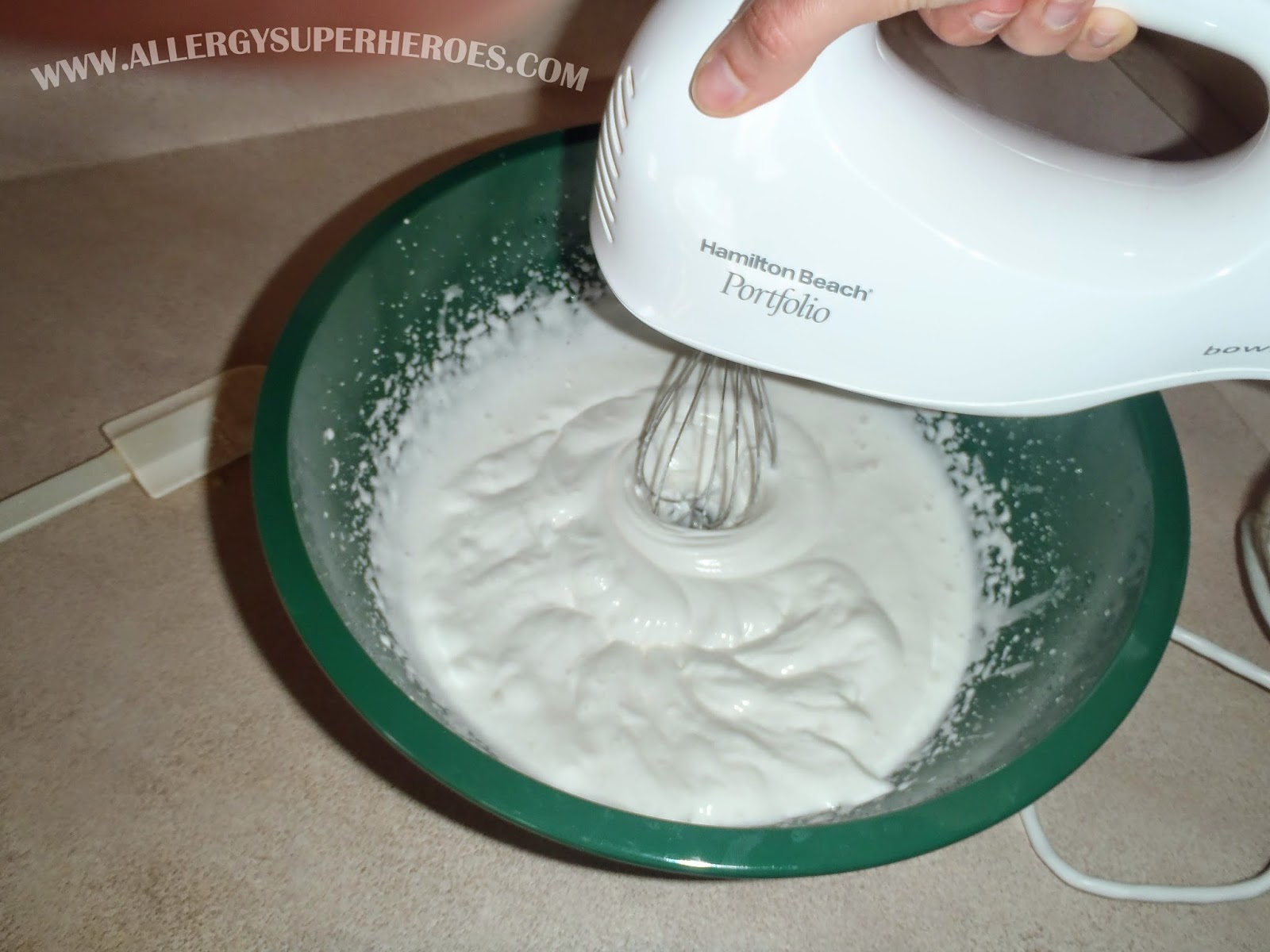 Please excuse my finger in the top of some of these photos. It’s hard to take pictures with my non-dominant hand while mixing with the other. 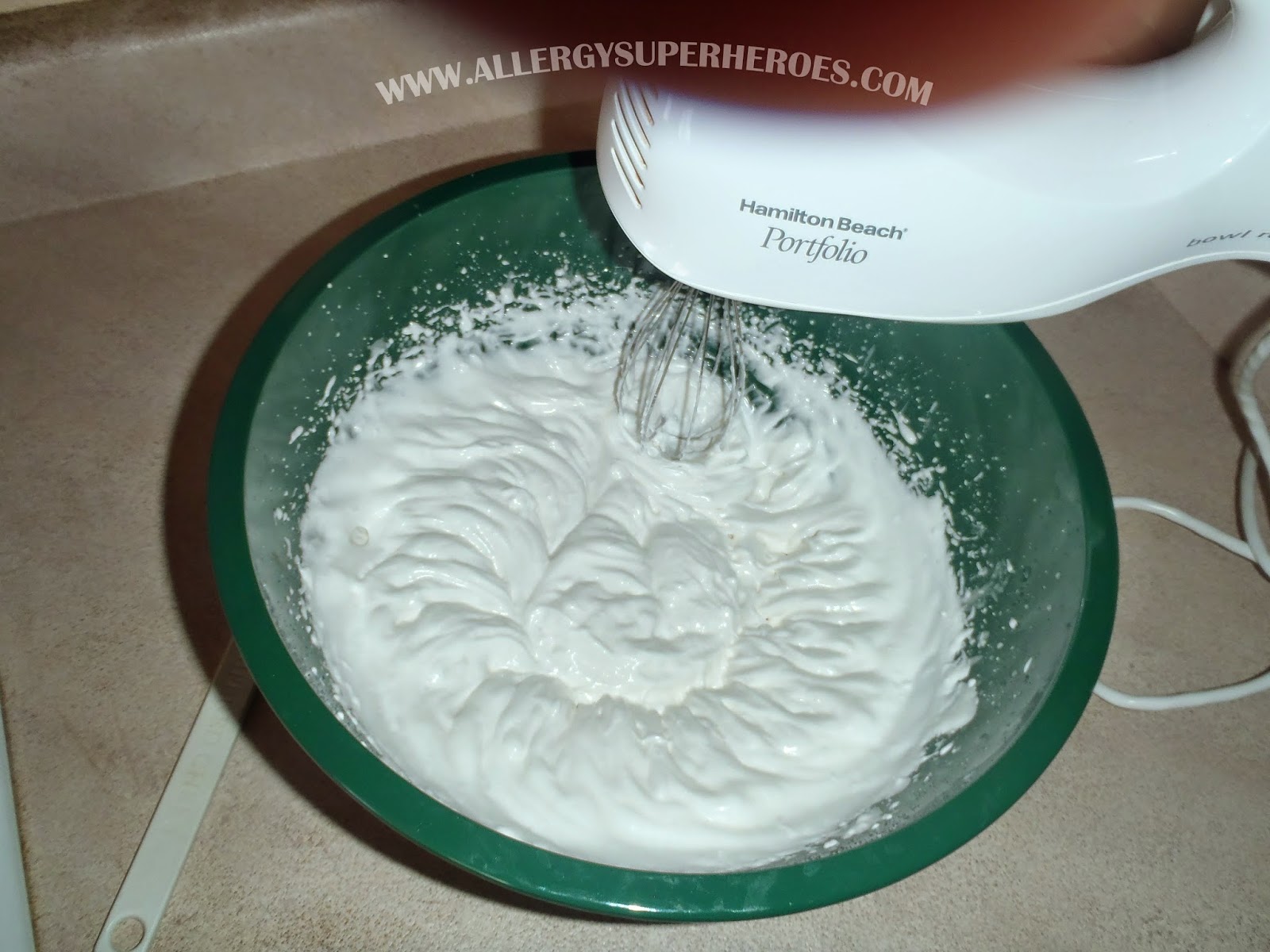 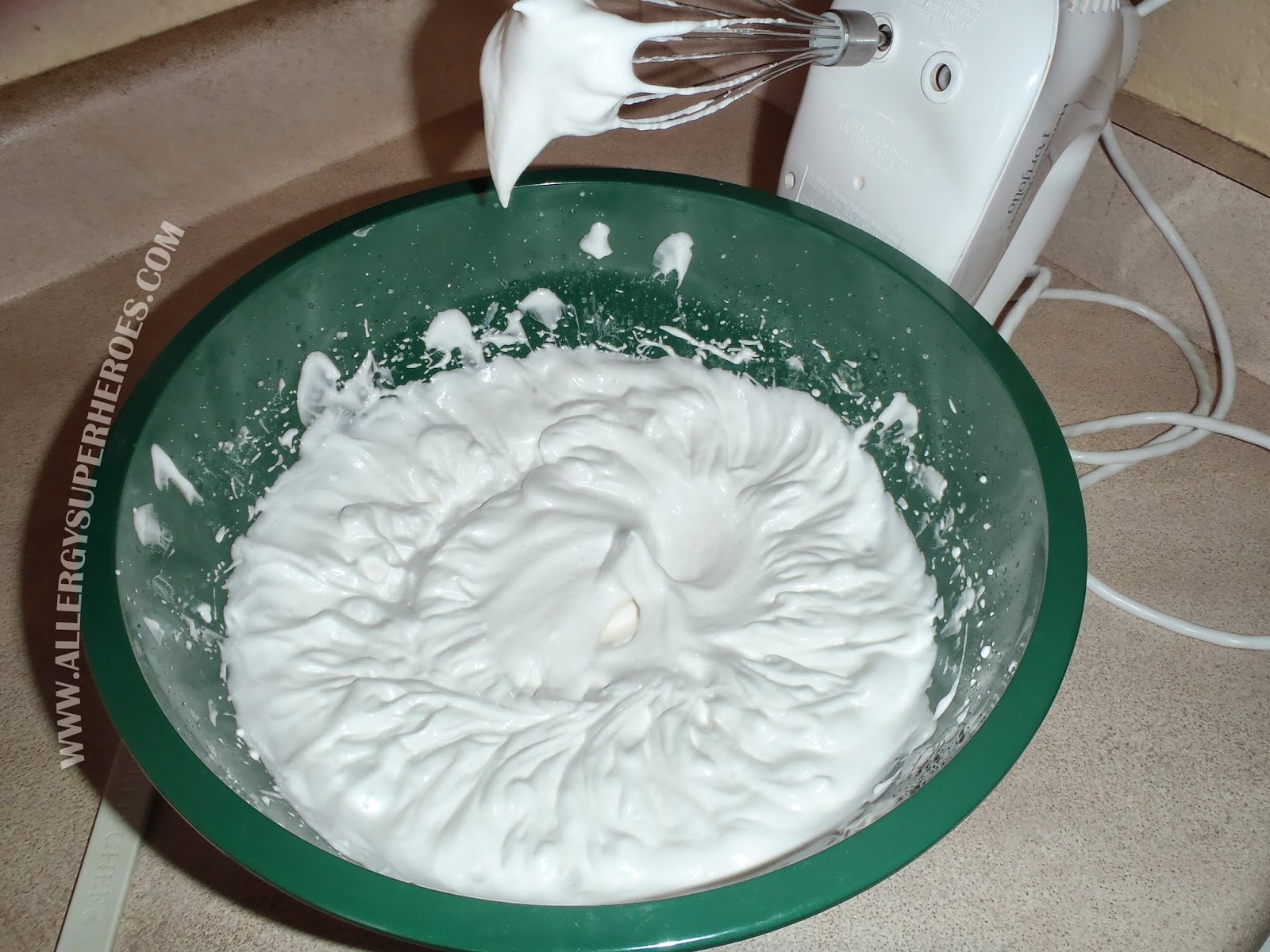 Ta da! Thirteen minutes of beating. My right arm was shaking as I took this picture. 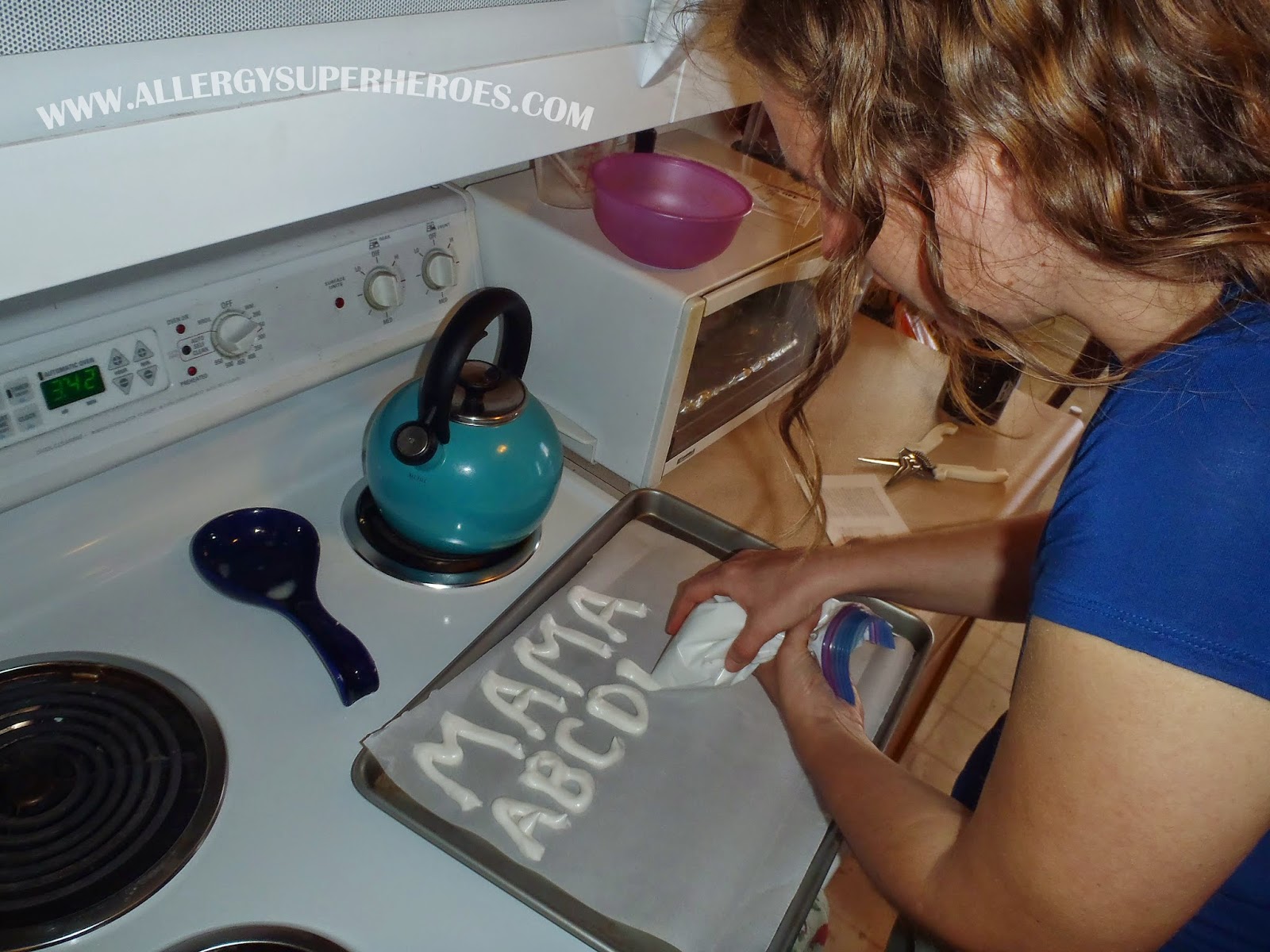 With most of my meringue, I made cookies. I spooned it into a bag, cut off the corner, and piped it in alphabet shapes onto baking trays (line with parchment paper first!!!!!!) 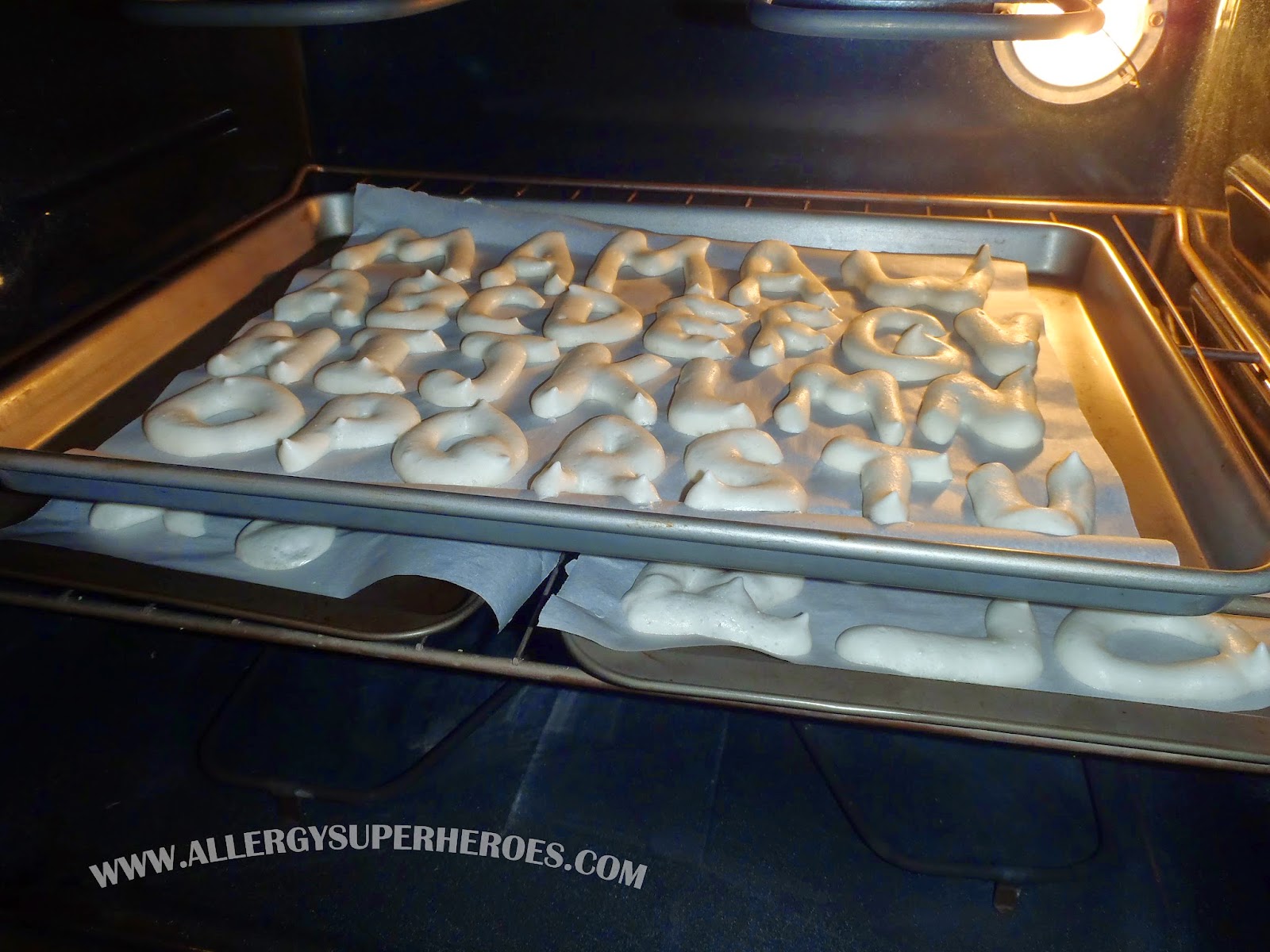 This is a recipe that “dries out” more than it “bakes.” You want to heat the oven to 200 degrees and bake the meringues for 1 hour. Then you want to turn the oven off but LEAVE IT CLOSED! and keep the meringues inside for at least two hours. (This put us into crazy hour with the kids, so I didn’t come back to mine until after about 4 1/2 hours of sitting in a cool oven.) It’s important to leave the oven closed, because opening it will allow moisture from the air back in. 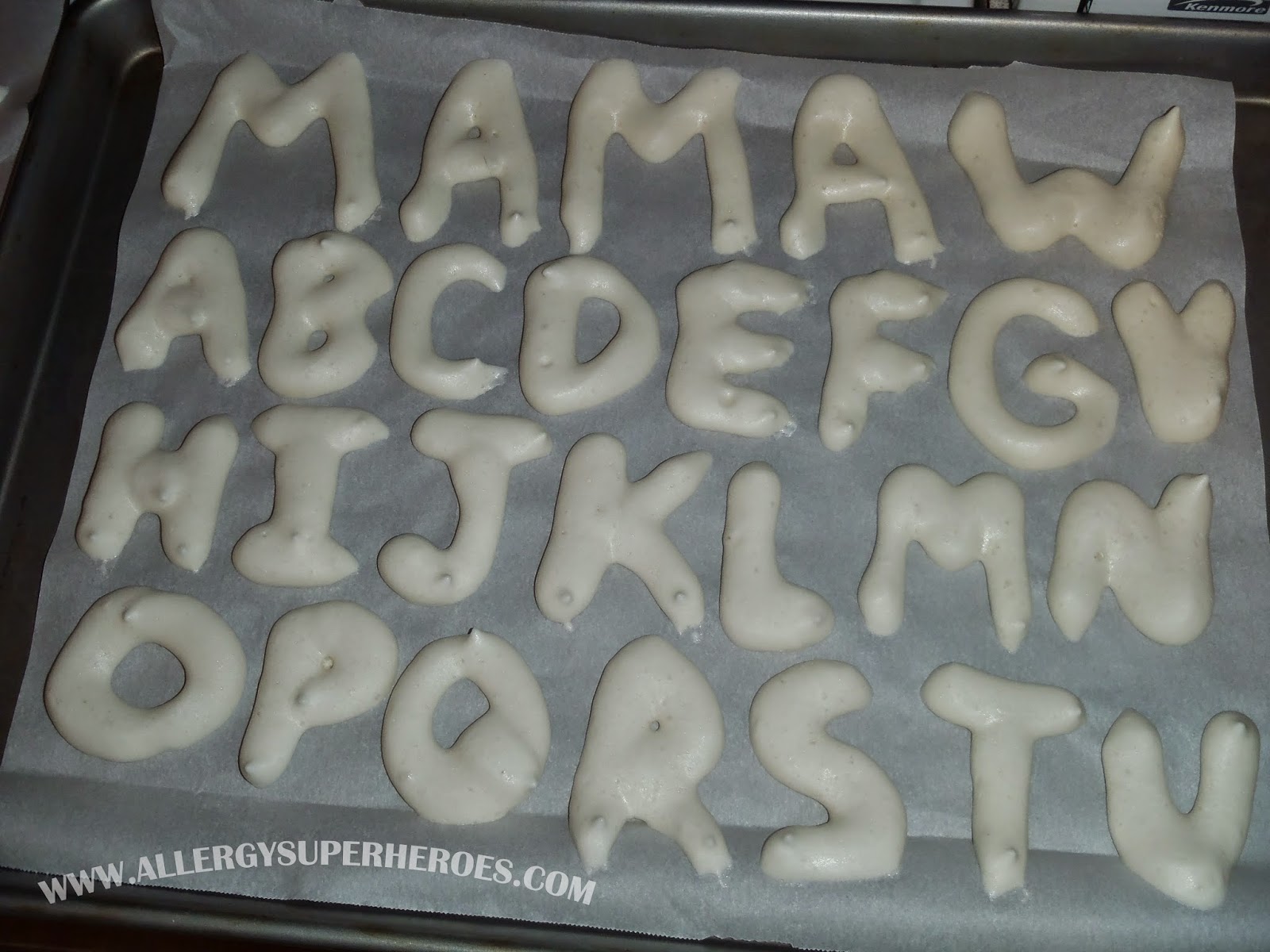 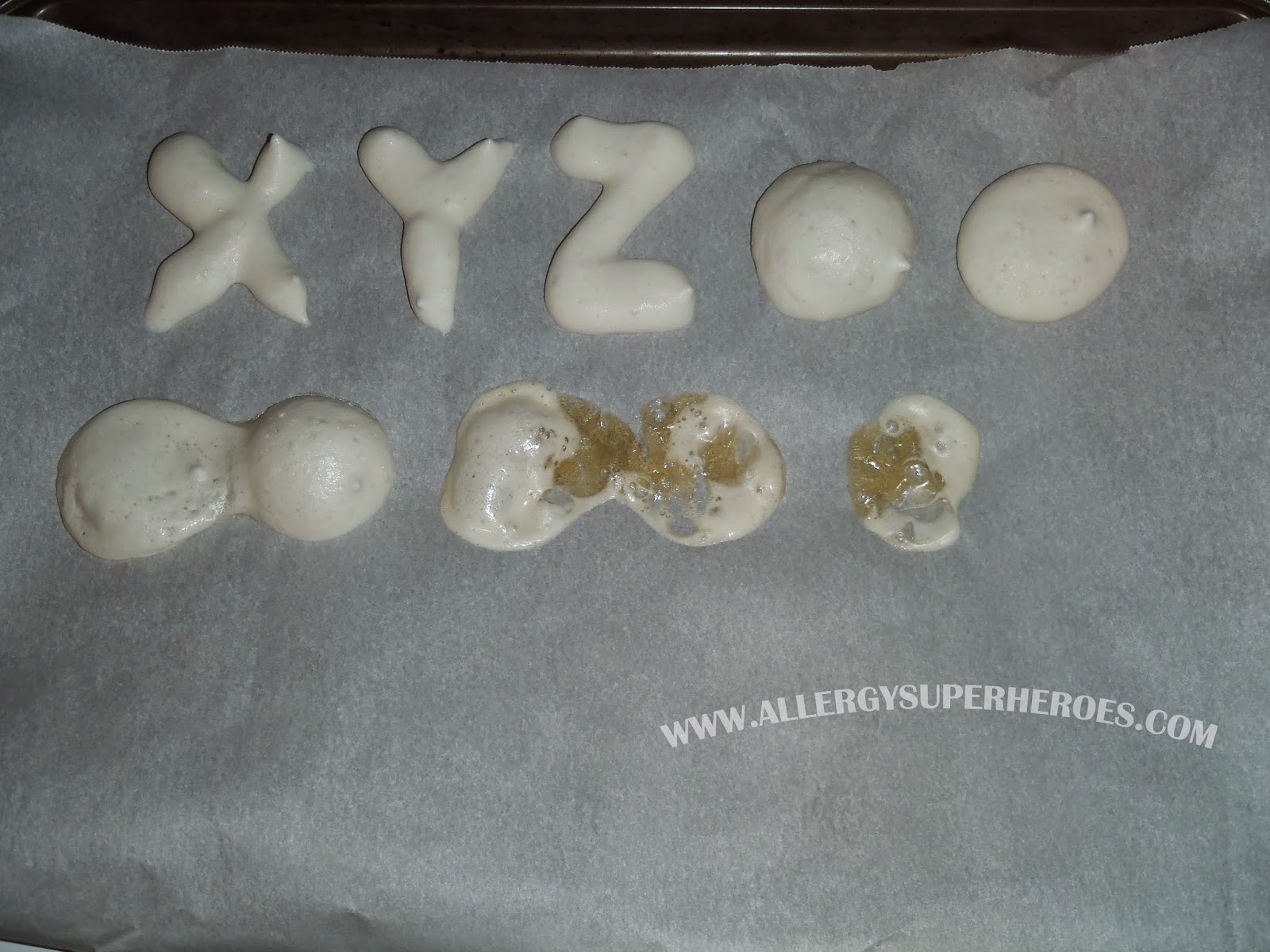 I’m not sure what happened with the last three teardrops. 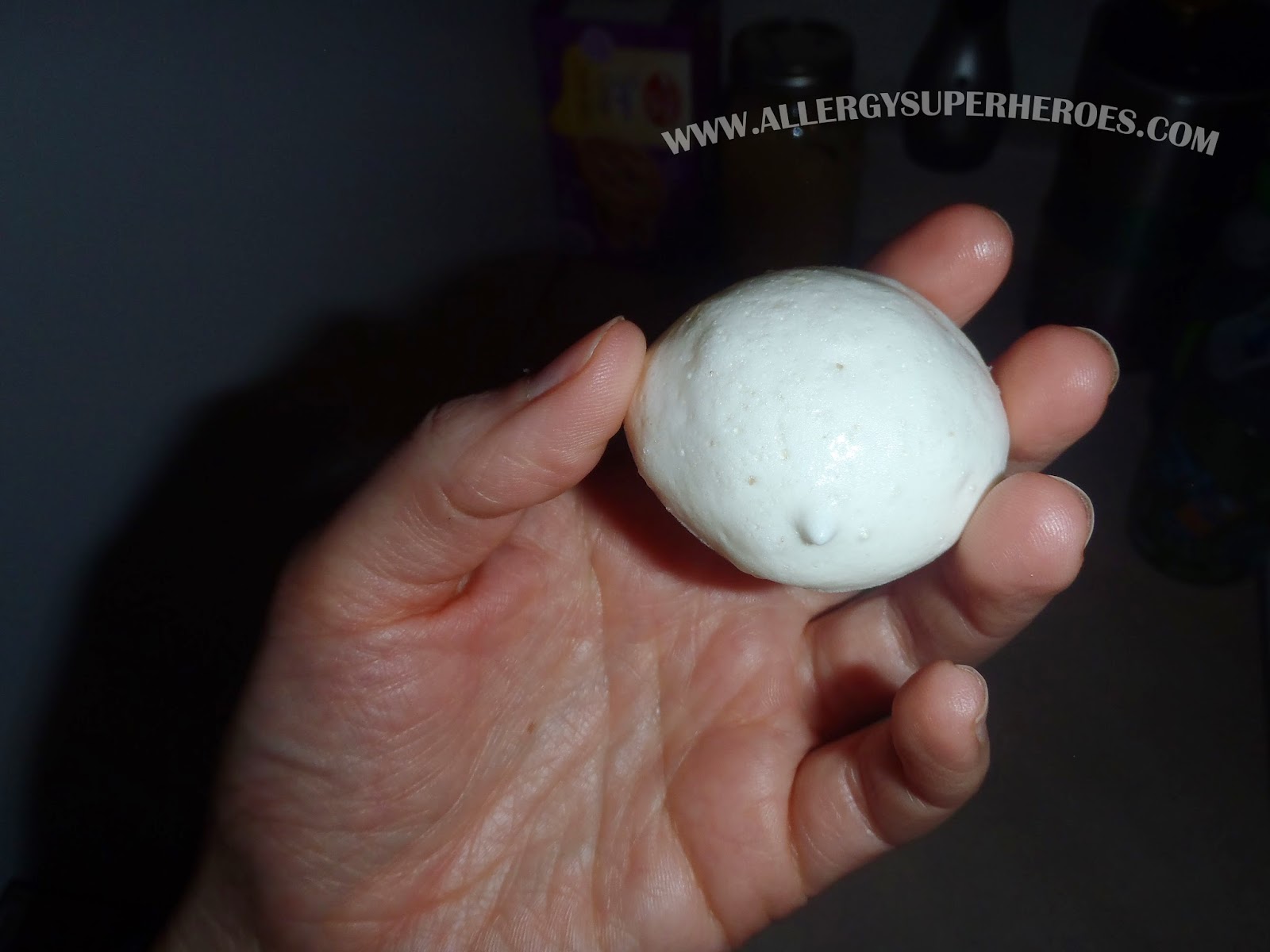 In fact, all of the teardrops I made came out hollow, but the letters came out fine. 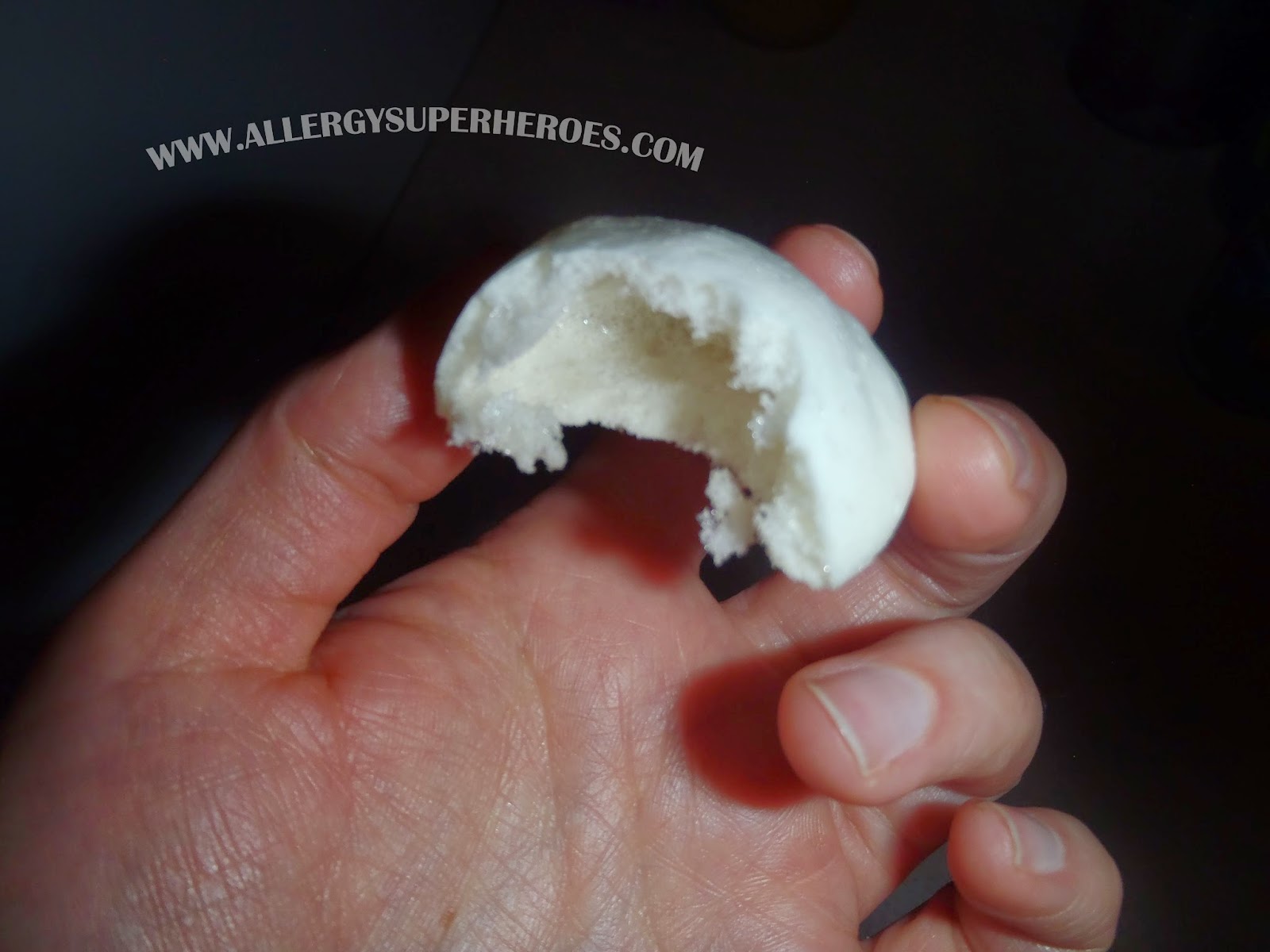 I don’t know if it was how thick they were, or if it was just that they were the last ones I made (I did teardrops after finishing the alphabet) and maybe it was separating. Regardless, most of these came out great! 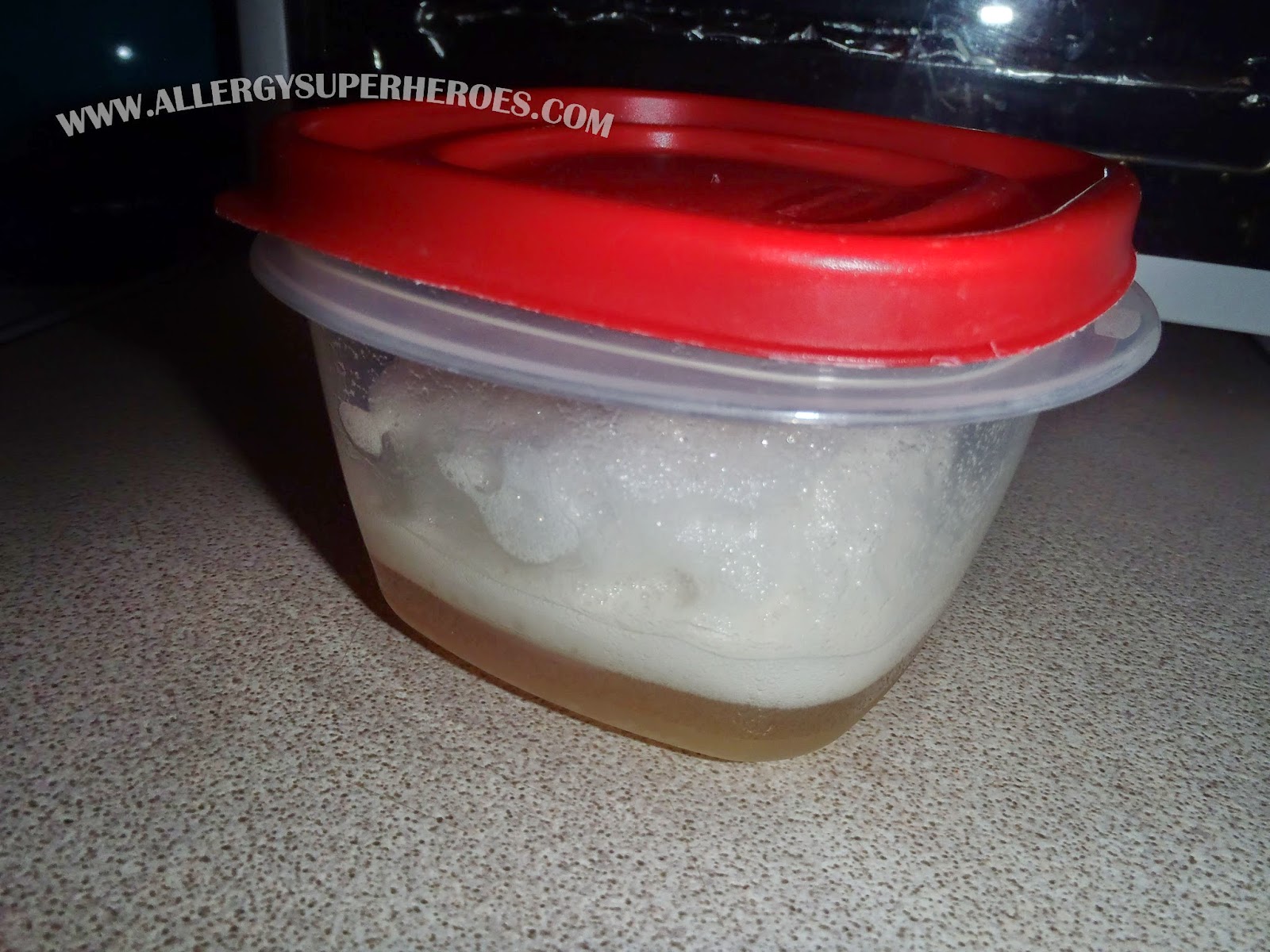 I saved a bit of the soft meringue in the fridge, figuring that we’d find another use for them. By later that night, and definitely by the next morning, it was separating. 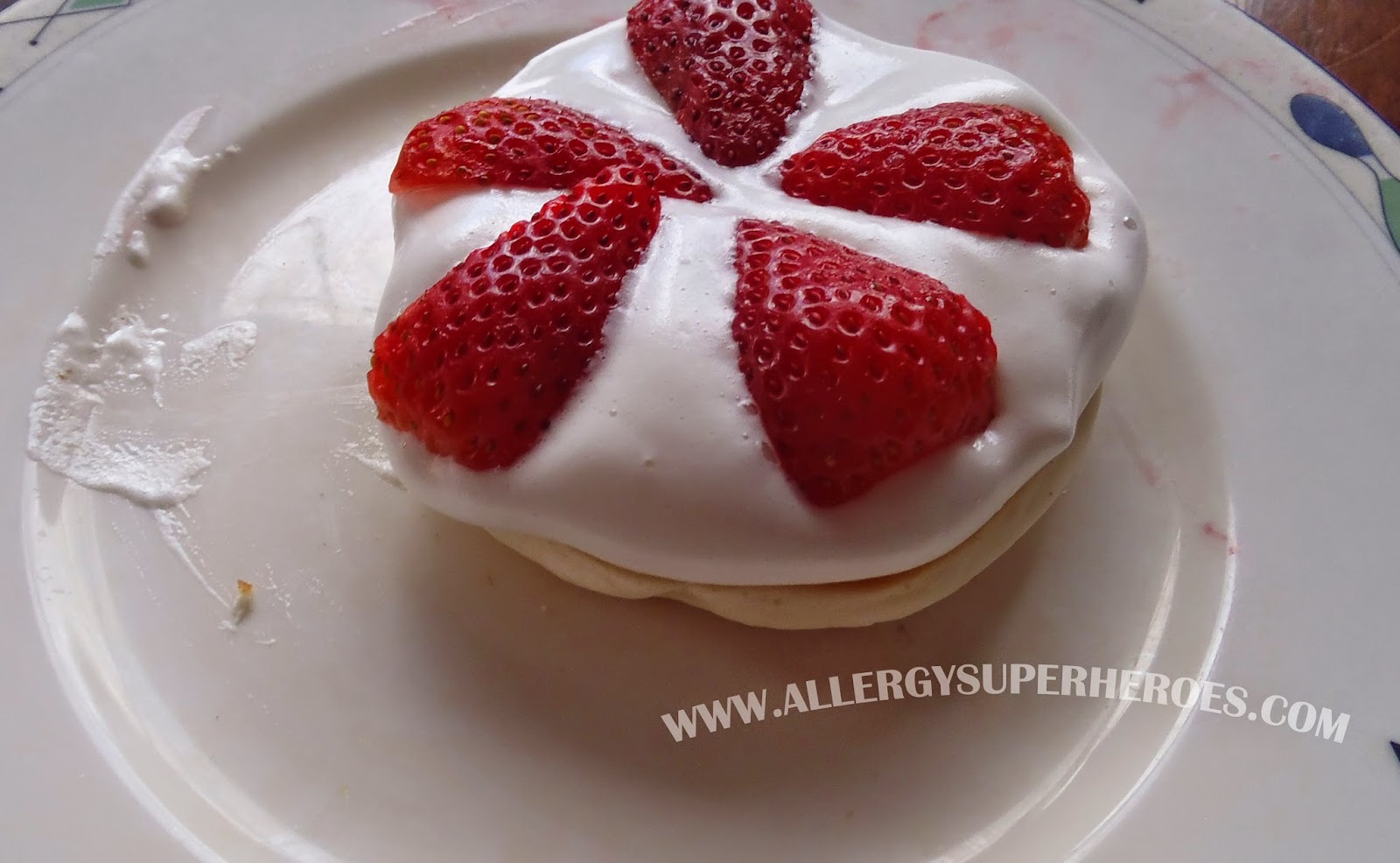 I re-whipped it to soft-peak stage and we used it to top our Sunday morning pancakes!

I’ve heard of some people adding xanthan gum or cream of tartar to their meringues (~1/2 tsp of either) and I wonder if these stabilizers would have kept it from separating in the fridge, or prevented the teardrop meringues from getting hollow. I guess I’ll have to try another batch, as soon as I finish my current batch of hummus! 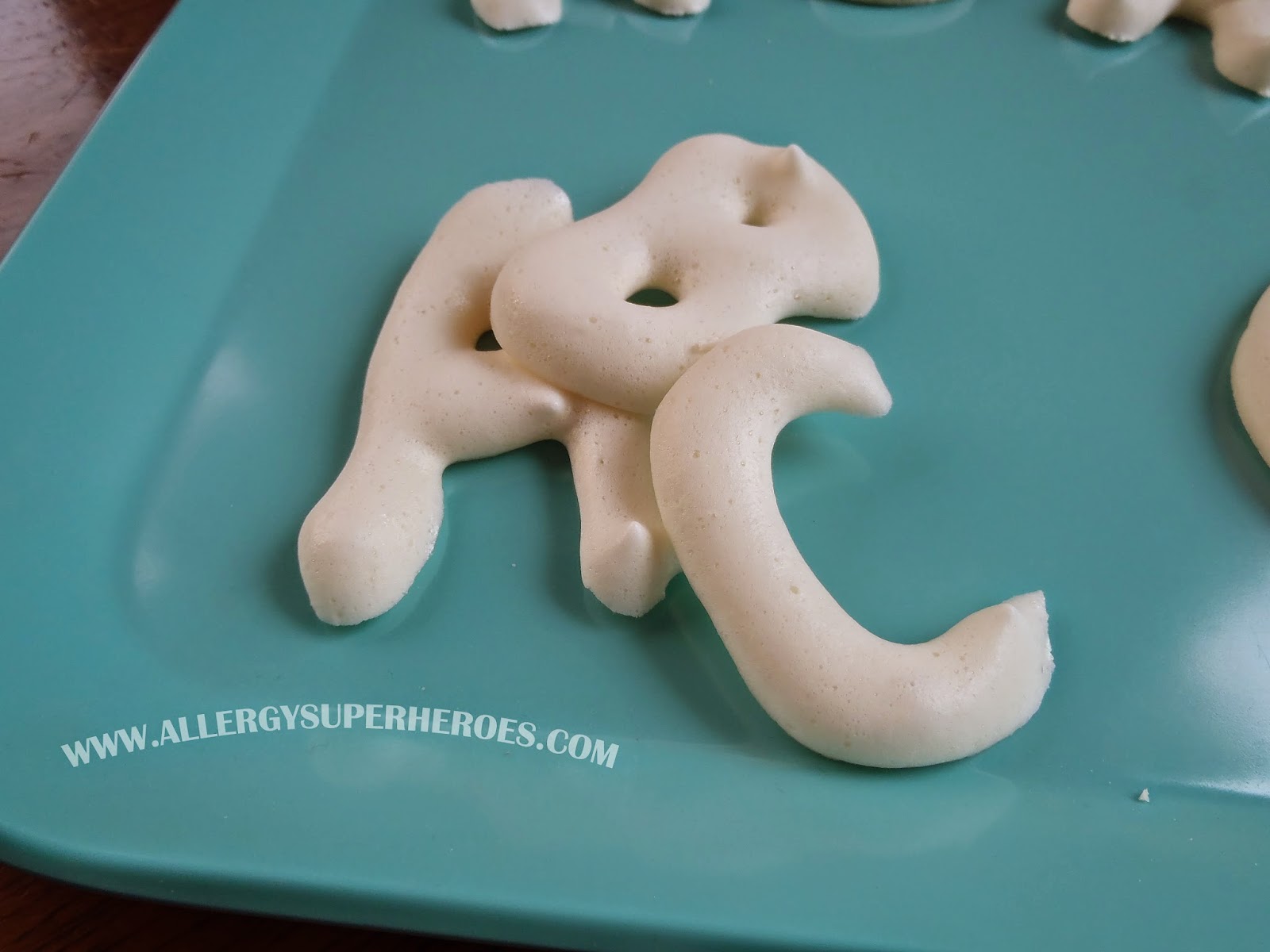 Only one of my kiddos liked the meringue “raw,” but both of them were wolfing them down in their baked form. They’re so insubstantial, it’s easy to want to eat more and more and more! 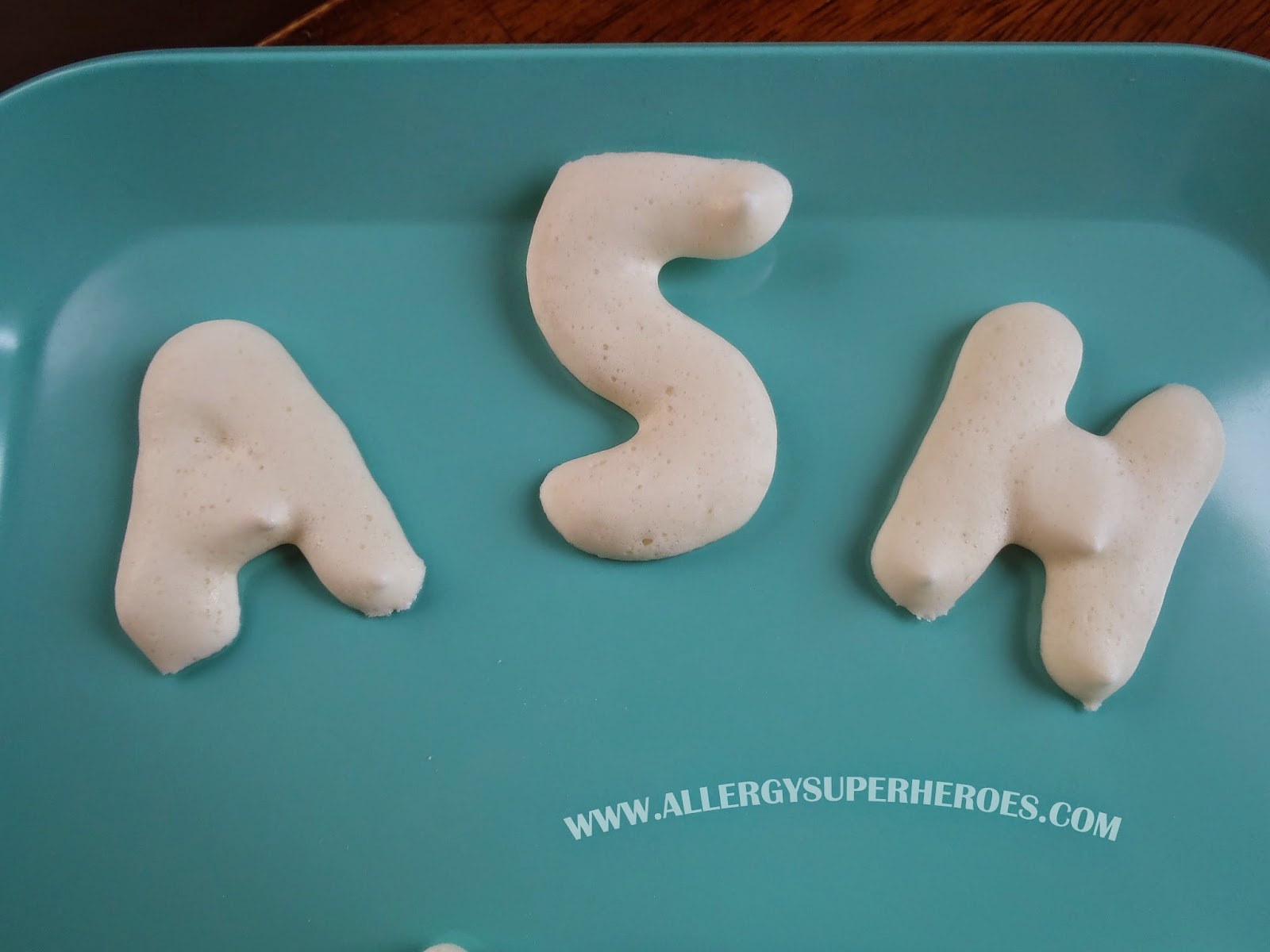 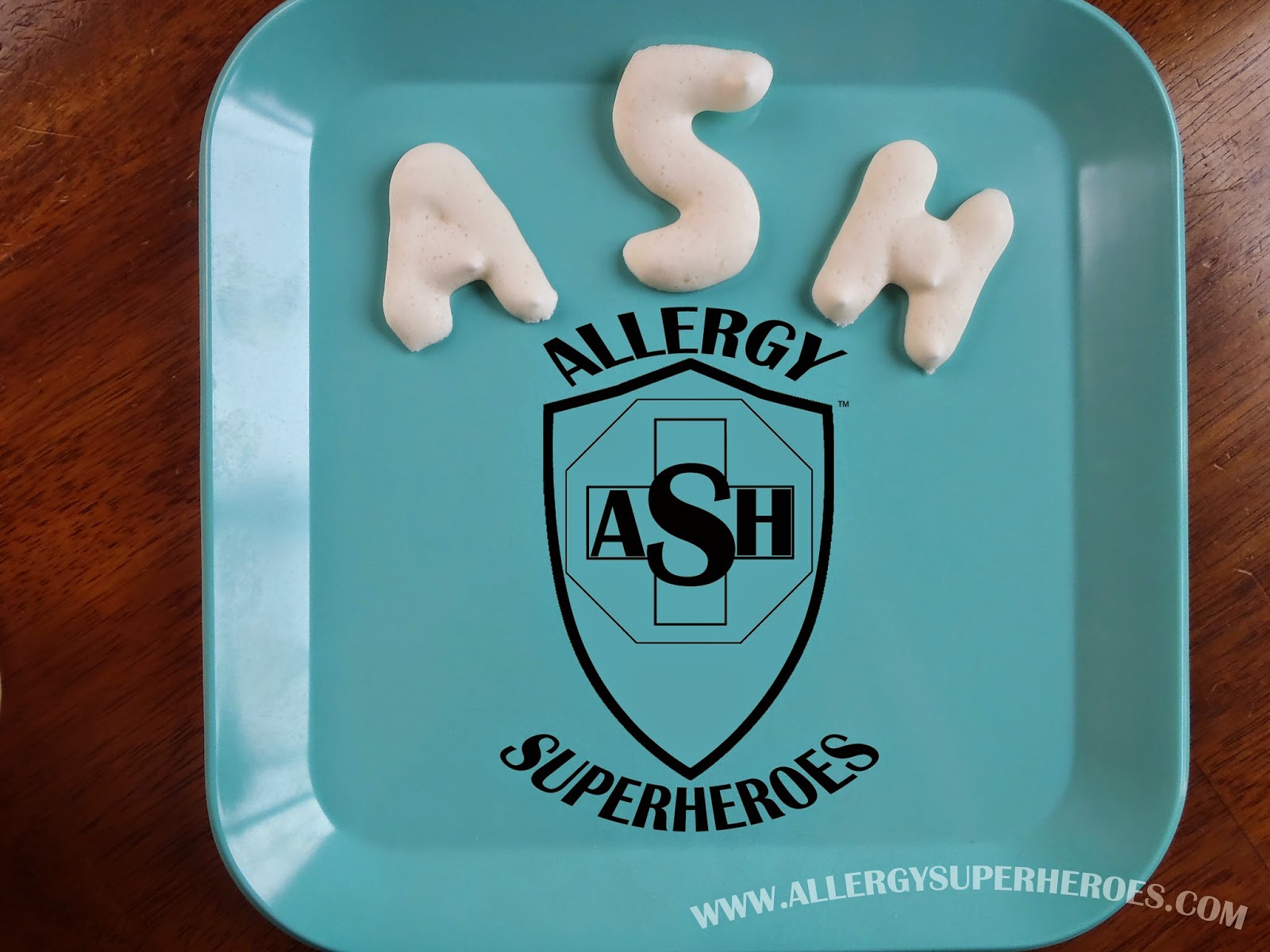 What will you make with your egg-free meringue?

Ham and Bean Soup – Free of the Big 8 Allergens!